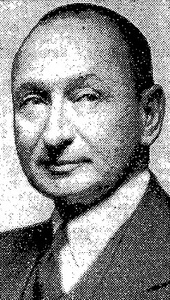 Carl M. Loeb, head of the Stock Exchange investment banking and brokerage firm of Carl M. Loeb, Rhoades & Co., died yesterday in Mount Sinai Hospital. He had been ill there since Dec 10, and had suffered periodic ailments during the last year. He was 79 years old and lived at 910 Fifth Avenue.

Mrs. Loeb died Nov. 25, 1953. shortly after a family celebration marking the fifty-seventh anniversary of their marriage.

Mr. Loeb was born Sept. 28. 1875, at Frankfurt. Germany, a son of Adolf and Minna Loeb. He was 17 years old when his employer, a German concern that then was parent organization of the American Metal Company, sent him to work in its office at St. Louis. Five years later Mr.

Loeb was naturalized as a United States citizen.

In 1904, having achieved a vice presidency in American Metal, he came to New York. He was elected president of that organization ten years later. In 1917 he had been made president of Climax Molybdenum Company.

In January, 1931. having retired from his other business connections, he founded the brokerage firm. He remained active in it until he became ill last month.

For many years Mr. Loeb was president of the Home for Aged and Infirm Hebrews and a trustee of the Federation of Jewish Philanthropies.

He also was a supporter of the New York Guild for the Jewish Blind, and a life trustee of Valeria House, a vacation resort in Peekskill, N. Y. for persons of medium income.

Mr. Loeb donated a collection of manuscripts of Heinrich Heine to the Houghton Library at Harvard. To Syracuse University, in 1946. he and Mrs. Loeb gave fifty-three acres and a number of buildings on the shore of Upper Saranac Lake for use as a faculty rest home and a student art center.

It was in 1952 that Mr. and Mrs. Loeb learned of the need of a new boathouse on the Central Park Lake that was a feature of the view from their apartment. They pledged a gift of $250,000 for the purpose, and later increased the amount to $305,000. The brick-and-limestone building, which also houses a cafeteria, was under construction when Mrs. Loeb died.

For this gift the Park Association awarded the couple its plaque for 1953, honoring Mr. Loeb and his late wife for "practical public-spirited philanthropy."