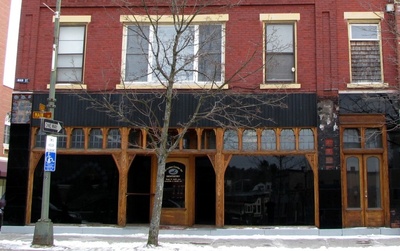 Black Carrara glass is on either side of the tinted windows of the Harding Block; several pieces are missing. The other remaining example in Saranac Lake is above the display windows of the Scheefer Jewelers building, now the Twin Crystal Rock Shop. Carrara glass is a pigmented structural glass that was popularity from the beginning of the Great Depression to the outbreak of World War II. Its origins can be traced to the turn of the century— the Marietta Manufacturing Company claimed to be the first producer of the material, which was intended as a substitute for marble called "Sani Onyx", in 1900. The Penn-American Plate Glass Company followed with white and black "Carrara Glass" circa 1906; the name "Carrara" suggested the white glass's resemblance to the white marble of the Carrara quarries of Italy.