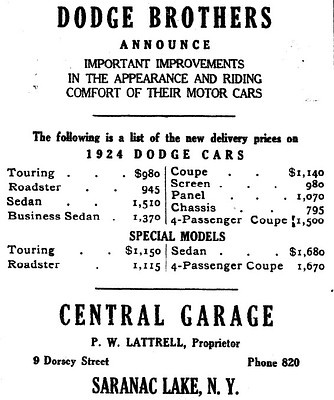 To Be in Lattrell's Central Garage on Dorsey Street near Bridge

The Saranac Lake Auto Show, under the auspices of Jackson A. Matthews Post No. 614, American Legion, will be held May 1st, 2nd and 3rd at the Central Garage, 9 Dorsey street, according to an announcement made by the commander, James R. Merrell. [sic: Merrill?]

In view of the great success of the show and exposition last year, merchants and dealers of the town are entering enthusiastically into the plans for the coming show, and the prediction is made that the affair this year will equal the high standard set by the one last year, both in point of display and attendance. The time is set forward so that the spring and summer models, being introduced by the most of the motor companies, will be on exhibition.

In addition to the auto displays, many of the merchants in town will have exposition booths, and this feature of the show will be fully as pronounced.

P. W. Lattrell, proprietor of the Central Garage has announced that the garage will be painted and refinished thruout, and his business and cars moved out for a period of one week during the show. The decorating firm will be Geo. A. Trahan & Co., the same as last year.

Entertainment features will be announced later.