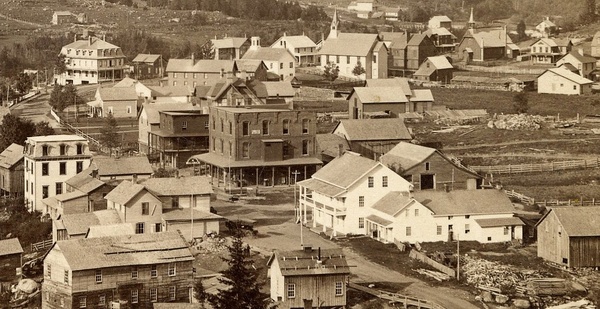 Scene of the killing: the Riverside Inn is the white frame building at right; the Spaulding Block is the brick building across River Street from it, c. 1885. For the original photograph, of which this is a detail, see Saranac Lake Village, c. 1885 Born: c. 1856, from Harrietstown census, 1870 1

On June 22nd, 1888, an altercation was taking place in Blood's Hotel (later the Riverside Inn) when George Berkeley, the proprietor, refused to serve any more drinks to a guide named Charles Brown. A scuffle took place, ending with Brown's being ejected from the barroom. As he left he threatened to "get even." Going home he got his deer rifle and returned to Titus Spaulding's (his brother-in-law's) store [in the Spaulding Block] which faced River Street and the opposite hotel. Here he waited until Berkeley stepped out on the porch, and he immediately fired the fatal shot which ended Berkeley's life. Brown fled to the woods and it was rumored that he finally relocated in Alaska never returning to this area.

As Titus N. Spaulding is named as Charles Brown's brother-in-law in this account, and Calvin Brown's daughter Abbie was Spaulding's wife, it appears that Charles Brown was also Calvin Brown's son. This relationship is corroborated by another article which states that Spaulding was a brother-in-law of Mrs. Catharine Brown Potter, Abbie's sister. The murder must have been a severe blow to the reputation of this prominent family and its substantial business interests. Spaulding failed in business in 1892.

The Plattsburgh Telegram reports that Chas Brown, the murderer of George Berkley at Saranac Lake, was seen on Sweeney Carry recently, by a brother of the murdered man. Berkley came towards him to shake hands, when Brown told him to keep away. "If he came another step towards him he would put a bullet through him." Another is to the effect that Brown is said to be in a forlorn condition as to clothing and health, and to begin to show signs of exhaustion from poor food and exposure. The fact that he has a bad scar on his under lip, which the growing beard will not cover, makes his recognition so sure that he is afraid to leave the woods and go among civilized people. He is said to have told acquaintances that he expected to die of fatigue and exposure in the woods, and to declare that he will not allow himself to be taken alive.

1. As these dates of birth are so different, it is likely that they refer to two different Charles Browns.