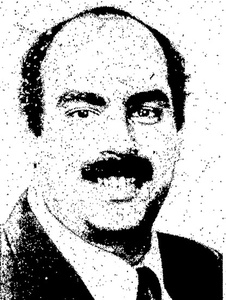 Charles Decker, known as "Charlie," was the managing editor of the Adirondack Daily Enterprise. He was a son of Dr. Fritz Decker and Janet Parker Decker. He died an untimely death, as a young man, from natural causes, a great sorrow to his family and to the community where he grew up. He is buried in the Harrietstown Cemetery.

By The Enterprise Staff

SARANAC LAKE — Charles B. Decker, journalist, environmentalist and lover of the Adirondack wilderness and its peoples, died Wednesday, July 2, at the House of the Good Samaritan in Watertown. He was 34.

A native of Saranac Lake, Decker worked in various editorial capacities for the Daily Enterprise, leaving in 1986 to become state editor of the Watertown Daily Times.

When he suffered a brain stem hemorrhage Tuesday night at his home on Old Military Road in Sackets Harbor, he was assistant managing editor of the Times.

The funeral will be at 2 p.m. Sunday at the Church of St. Luke the Beloved Physician at Main and Church streets, Saranac Lake. Calling hours will be 7-9 p.m. Saturday at the Fortune Funeral Home, Saranac Lake.

Charles Decker was devoted to journalism and by the time of his death he was one of the premier journalists of Northern New York.

Born and raised in Saranac Lake he was an avid fisherman and hunter and a passionate defender of the Adirondack wilderness and the people who lived in it.

He was a wonderful storyteller, treasuring, especially yarns about the many colorful characters of the Adirondacks.

At the time of his death he was becoming one of those legends himself.

Starting in high school, staffers recall, Decker would pitch a varsity baseball, game then come to the paper later to write the story. He worked at the Daily Enterprise, where his heart and many of his closest friends in the newspaper business either work now or got their start before moving on to bigger newspapers.

He began his full-time newspaper career with the Daily Enterprise in 1976.

An accomplished, writer and photographer, he possessed a natural talent for the business, which, he discovered, he could not stay away from for long.

In 1979, he was named sports editor of the Daily Enterprise, and was given the assignment of producing the Daily Olympic Digest, during the Winter Olympic Games the following year.

That specialized morning daily newspaper quickly became the “Bible” for the thousands of journalists here for the games and served as a primary resource .for their stories.

The Digest, and Decker, won the top award for community service of the New York State Publisher's Association in 1981. He also won a spot news award from the Associated Press in 1979 and the United Press International distinguished achievement award and the National Fine Arts Medal of Honor.

After the Olympics, Decker moved to Wheeling, W.Va., where he was' was. a reporter for the Wheeling Register, then he went to Parkersburg, W.Va., as sports editor.

He returned to the Daily Enterprise as managing editor, before moving on to Watertown.

He graduated from Saranac Lake High School, where he was an outstanding varsity football and baseball player.

He attended Cornell University and the University .of Missouri School of Journalism.

While at the Daily Enterprise Decker, wrote extensively about the out-of-doors, hiking, hunting and fishing.

At the Watertown Times, he conceived and edited the “Outdoors” page, and frequently wrote about  fishing.

As assistant managing editor in Watertown he was in charge of the news-gathering efforts, and supervised reporters in Watertown and the paper's bureaus throughout the North Country and in Albany and Washington.

William Doolittle, editor and publisher of the Daily Enterprise from 1971 through 1989, said today, “Charlie was extremely talented. He could do everything in journalism. His judgment was nearly faultless, as well, even at a young age. He led a group of very fine journalists who worked with us before and during the Olympics.

“More than that he was a close friend of this community, Saranac Lake, and all of us who worked at the paper. His sudden death is a dreadful shock.”

“He did a marvelous job here at the Watertown Times,” said Managing Editor John B. Johnson. \He was a good editor, loved the news business arid was good at getting at the truth.”

In lieu of flowers donations may be made to the Charles B. Decker .Memorial Scholarship Fund in Journalism in care of the Fortune Funeral Home.