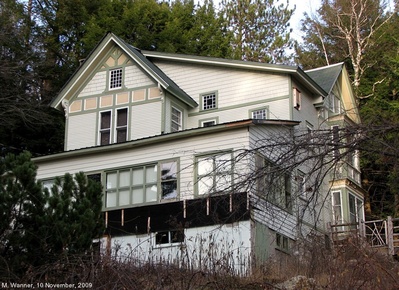 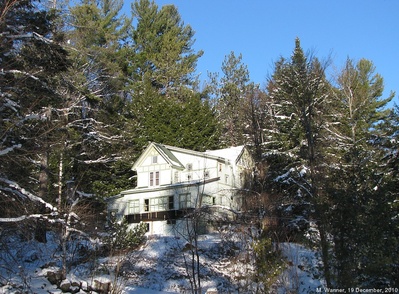 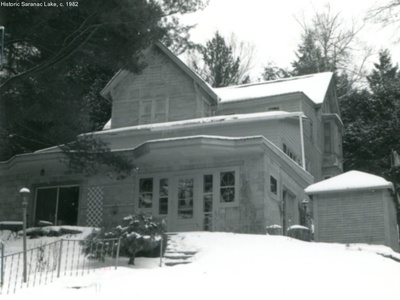 Other information: It was used as an annex to the Ampersand Hotel. Exterior porches were enclosed or removed in the 1950s and '60s.

—Mr. Charles Greenough is moving into his beautiful cottage near Hotel Ampersand. 1

The Adirondack Room of the Saranac Lake Free Library has a photo # 83.298, labeled "Greenough Cottages — Ampersand — Brightside, Fairview, Cozy Nook." This is the same photo on the Northern New York Library Network, mislabeled as located on Broadway. Brightside was apparently the cabin behind the house (which may have been torn down by now); Fairview was the name of the main house in the photo (our "Charles Greenough Cottage"), and Cozy Nook was the substantial house on the right of the photo, to the rear of Fairview; Cozy Nook had vanished by 1993.

Another photo, #83.14 (apparently a postcard) bears the printed title "Greenough House and Cottages, Ampersand Park." Mr. Greenough was apparently the owner or on-site manager of the Ampersand Hotel property at that time, or had a complementary cottage business very near the hotel.

This was later the home of the respected Adirondack naturalist, Greenie Chase and his wife, Creta Tredwell Chase, a well-known artist and craftswoman. As they had no children, the house was left to the Nature Conservancy when Greenie died in 1995. A two car garage that stood when the Nature Conservancy sold the house was later crushed by a heavy snowstorm. A drive by on March 18, 2010, confirmed that the cottage is being restored, with Creta Chase's large (and rather unsightly) garage-workroom removed from the front of the house, repairs being made and a nicely-detailed tri-color exterior paint job improving the premises.