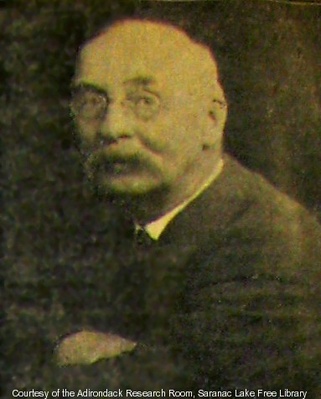 Charles H. Kendall. From an obituary in a scrapbook kept by Alfred L. Donaldson, from the Malone Farmer. Courtesey of the Adirondack Research Room of the Saranac Lake Free Library

Charles H. Kendall ran the Riverside Inn and later Kendall's Grocery, which he operated for 25 years.

He started as a salesman of cigars and candy along Lake Champlain, and settled in Ausable Forks in 1864. In 1876 he leased the Ausable House, which he ran until 1883, when he moved to Saranac Lake, where he leased the Riverside Inn from Orlando Blood. In 1886, he sold the Inn to George Berkeley and acquired 35/37 Main Street, where he established Kendall's Grocery, which became a central gathering place in the village until he retired, in 1909. He lived above the store.

The 1900 U.S. Census states that he lives on Main Street and is a Merchant - groceries. Living with him were his wife, Winifred, daughters Myra and Winifred, and a boarder, Henry Harbaugh.

The 1910 U.S. Census states that he lives at 35 Main Street and has his own income. Living with him were his wife, Susan, and step-son, Freddie Conrad.

Charles H. Kendall died at his home, 37 Main street, Saranac Lake, at 5 o'clock Thursday afternoon, following an illness of pneumonia. Mr. Kendall was in his 80th year and had been associated with the business life of Saranac Lake since 1883.

He was born in Delhi, Delaware County, the son of Andrew E. Kendall of English extraction. His ancestral connections in New England were of the minute men of the Revolutionary War. The father of the deceased was a merchant and during boyhood he removed to Albany, thence to Keeseville, and later to AuSable Forks. Although Mr. Kendall traveled as a salesman for confectionery and cigars in the villages along Lake Champlain before the railroads were built, he did not enter business in AuSable Forks until 1864, when he became connected with the firm of J. & J. Rogers Company. He remained with the Rogers Company until 1876, when he leased the AuSable House at AuSable Forks. Mr. Kendall conducted the AuSable House until 1883. In the autumn of that year to removed to Saranac Lake and leased the Riverside Inn of Alonzo Blood [almost certainly Orlando Blood}.

Mr. Kendall remained at Riverside Inn until 1886, at which time George Berkeley purchased the property and he accepted for his interest in the furnishings and stocks at Riverside Inn the building and land at 37 Main street. For a time he traveled west after which he returned and stocked the store with merchandise. For 28 years and to the day of his death Mr. Kendall made his home over the store and for 23 years he was actively engaged in business there.

At the time he retired on April 1, 1909, Mr. Kendall was the oldest merchant in Saranac Lake in point of years of actual business life. He was 74 years of age and had never been ill for more than a day at a time.

Mr. Kendall was a member of the Masonic fraternity. In politics he was a Democrat.

Charles H. Kendall, for 25 years one of the leading business men of Saranac Lake, died of pneumonia at his home in that village last week in his 80th year. He was employed by the J. & J. Rogers Co. at Ausable Forks for 16 years, conducted the Ausable House at Ausable Forks for seven years, leased Riverside Inn at Saranac Lake of Orlando Blood in 1883 and carried it on till George Berkeley purchased the property in 1886. A while afterward he opened the store in the building over which he had since resided. Mr. Kendall retired from active business pursuits in 1909. He is survived by his second wife and four children of his first wife. These are Dr. F. E. Kendall, of Saranac Lake; Mrs. R. H. McIntyre, of Brooklyn; Mrs. E. O. Smith, of Storrs, Conn., and Mrs. J. H. Fletcher, of Utica.

On page 745 in the St. Armand section of biographies of History of Essex County appears the following: