Charles H. Turner was a lumberman who owned Township 19, doing extensive mining and timber cutting.  He had moved to New Bern, North Carolina by 1919. 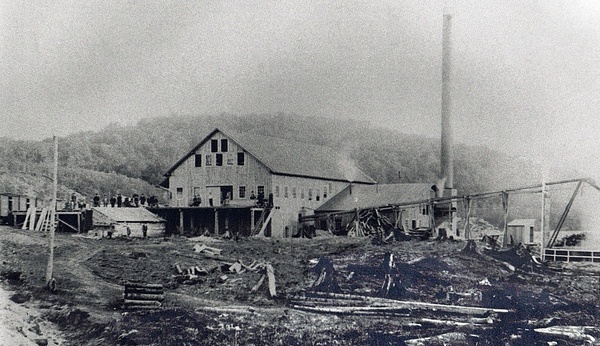 The mill at Derrick
from An Adirondack Ghost Town, Derrick, New York
An important purchase of Adirondack land from the King estate, of Boston, was completed on Monday by C. H. Turner, formerly of Plattsburgh, comprising township 19 in the town of Altamont. It contains 26,000 acres and never had been, lumbered until Mr. Turner begun operations there two years ago, at which time he bought the stumpage on the tract. It is considered one of the most valuable townships in the Adirondacks, and now that Mr. Turner has purchased it outright, he is certain to make a fortune out of the venture. The entire property cost him, including the equipment of the mill and other buildings for the accommodation, of help, etc., $240,000. Although started in the forest two years ago, Blue Pond [later Derrick] has grown to be a thriving community. There are two hotels, several stores, a Maccabee hall and school house, 87 children having been enrolled at the last term. Mr. Turner has a large, modern mill directly on the line of the New York & Ottawa R. R., and is cutting out about 15,000,000 feet of lumber a year. A large platform adjoining the mill and expending along the sidetrack for some distance enables him to load the cars as fast as it is cut out, saving a great deal of handling. Shingle and lath mills are also turning out large quantities of stock, so that everything merchantable is utilized. It is known as one of the liveliest mills in this section. Mr. Turner estimates that there is 145,000,000 feet of lumber yet uncut, about forty per cent of which is pine and 25,000,000 feet of birch and maple. His lumbering operations thus far have only included the northeast quarter of the township, on which are some of the handsomest pine to he seen in the Adirondacks. The mill runs night and day, employing about 100 men, the pay roll for which is $5,000 a month. Aside from the saw timber a conservative estimate of the pulp wood would be 75,000 cords and 20,000 cords of hemlock bark.

Some of the prettiest lakes and ponds in all this section are to be found on this tract, of which there are over twenty, nearly all well stocked with fish. Among those which are wholly or partially in. this township are East Pond, Dry Channel, East Pine, West Pine, Windfall, Clear Pond, Rollins, Deer and Long Pond, Big Wolf, Mountain, Willis, Potter, Marsh, Rock, Mud River, and Blue Pond. This property was parked by Mr. King a few years ago and Mr. Turner will continue to hold it in that capacity. The fishing and hunting are excellent, especially the latter, it being no uncommon thing to see from twenty to thirty deer all at once in a single pond.

Mr. Turner's present Adirondack holdings comprise 50,000 acres, 5,600 of which are in Kildare, St. Lawrence county, adjoining township 19 on the west, only a small portion of which has been lumbered during the present generation. He owns 6,000 acres in township 21, Hamilton county, 6,000 acres in the northwest quarter of township 22, Hamilton county and one-fourth of township 14 at Spring Cove in the town of Santa Clara, the latter having been purchased only a few weeks ago. There are a large number of coal kilns on this property which will be put in operation at once, a contract having been made for all the coal that can be turned out in a year no matter how great the quantity. There is also considerable pulp wood and saw timber on this property, and, in the hands of such a practical and energetic man as Mr. Turner, it is sure to show a handsome balance on the right, side.  —Malone Farmer.

Forest Owner Claims That Damage From Fire Started by Locomotive.

Malone, N. Y., Oct. 17.—Suit for the largest amount ever claimed in this State, it is said, for damage caused by forest fires, has been instituted by Charles H. Turner, who asks $410,000 from the New York & Ottawa Railroad.

Mr. Turner's tract of land, known as Township 19, lies just north of Tupper Lake. Fire alleged to have been started by a New York & Ottawa Railroad locomotive destroyed a considerable portion of the forest two years ago.