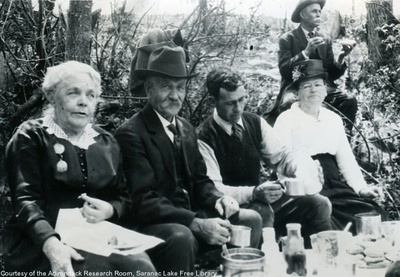 Charles H. Wardner owned the Lake Clear Inn overlooking Lake Clear. After his death, Lake Clear Inn was run by his son William.  He was a son of Addie Macomber Wardner and James M. Wardner.

Charles W.[sic] Wardner, widely known hotel man and proprietor of Lake Clear Inn, died last Thursday night after nearly two years illness of hardening of the arteries. He had been confined to bed since October and had been in Saranac Lake General Hospital for six weeks but had been taken home to the hotel a month ago.

Mr. Wardner was 79 years old. He was born in Burlington, Vt., and came to the Adirondacks as a young man. He was in the hotel business nearly fifty years and was known as one of the best hosts in the Adirondack resorts. He was also a skillful hunter and was thoroughly familiar with a large portion of the Adirondack wilderness.

As a young man he attended school in Wilmington and latter moved to Bloomingdale where he had a small hotel. The hotel was destroyed by fire. Mr. Wardner built a home there after his marriage to Miss Addie Reeves, of Wilmington. In 1890 he moved to Hiawatha Lodge at Coreys and, following his stay there, became proprietor of Rustic Lodge on Upper Saranac Lake.

About 21 years ago he bought Lake Clear Inn and, with the aid of his son, has since successfully conducted the hotel and camps at that place.

Following the death of his first wife, Mr. Wardner married Mrs. Sarah Jones Cook, widow of John Cook, of Malone, who survives him but who has been an invalid for several years.

Besides his widow he leaves a daughter, Mrs. W. D. Fribance, Hartford, Conn., and a son, William Wardner, Lake Clear, both by his first wife, and two stepsons. Fred Reeves, Tupper Lake, and Orie W. Cook, Plattsburgh; and one brother, Will Wardner, Bloomingdale.

Sunset Rock Hotel which was at the end of the present school's road, past the Johnson (the old Swinyer place) was built by Charles H. Wardner and was run as a fashionable hotel.