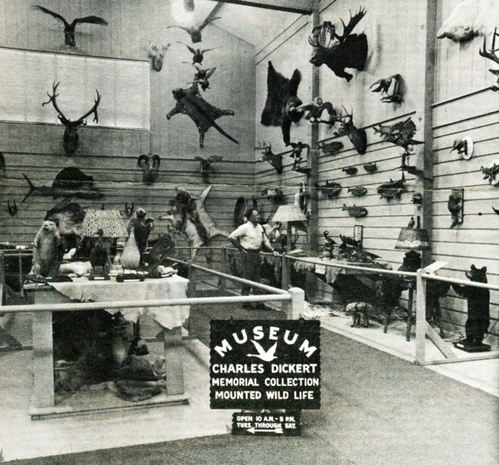 Charles L. Dickert was a master taxidermist and naturalist; Dickert's work was highly esteemed. Edmond A. Guggenheim donated his large collection of Dickert's work to create a museum in the Saranac Lake Free Library.

Charlie was only 19 years old when he made the big decision. He boarded the train in Grand Central Station to escape the grime and noise of New York City. He loved to hunt and fish and was strongly attracted to a related hobby. Where else could he satisfy his urgent aspirations but in the Adirondack Mountains some 300 miles to the north?

Arriving in Westport, Charlie abandoned the rails in favor of a tallyho bound for Saranac Lake. When he stepped down from the coach, in the summer of 1886, he saw what appeared to be more of a frontier settlement than a village. He must have noted the surroundings with some trepidation, but he soon shook that off with a firm decision to stick it out come what may. His related hobby happened to be taxidermy and he was soon apprenticed to H.H. Miner whose shop was located at what is now 209 Lake Street. Oddly enough, another taxidermist, Will Rice, ran a shop only two doors away. In 1892, Charlie married Ophelia Paul but the marriage was short-lived as his wife passed away in 1896. He worked with Miner for 18 years before stepping out on his own.

In 1904, Charles Lawrence Dickert opened his taxidermy shop at 16 Algonquin Avenue where for many years to come his expertise would attract a constant flow of sportsmen seeking to convert their game to permanent trophies. Although he did not advertise beyond the local area his fame soon spread to distant points and specimens arrived from as far away as Africa. Exotic skins were sent to him — lion, zebra and water buffalo.

Shortly after his move to Algonquin Ave., he married Fannie Trombley and they bult a home next to the taxidermy shop. His family burgeoned. One daughter, Lillian, from his first marriage, became Mrs. William Koemig. A daughter from his later marriage, Loraine, became Mrs. Willard Green. Both women were well-known in the village for many years but are now living out of state.

Early in his career, Dickert formed a lasting friendship with Edmond Guggenheim, a wealthy camp owner at Rockledge on Lower Saranac Lake. Guggenheim chose to decorate his camp with hunting trophies from near and far. Quite naturally, Dickert executed all of the mountings and the living room at Rockledge soon took on the atmosphere of a mini-museum. A full flight of mallard ducks were suspended from the ceiling and big game trophies adorned the walls. The friendship also produced a tennis court in the rear of the Algonquin shop. Dickert himself was not a true fan of the sport but he enjoyed watching neighborhood children use the court. His granddaughter, Jean Koernig, became the local feminine champ. Guggenheim, on the other hand, was an avid player and could be frequently seen in competition with his friendly rival, Stewart Park.

Rather than play tennis, Charlie preferred to immerse himself in the perplexities of his work. His lab was located on the second floor where, in denim shirt and long leather apron, he was completely surrounded with projects in all phases of assembly. On the workbench were items as large as a moosehead and as small as a chipmunk. His talents included a sound knowledge of tanning, carpentry and the molding of plaster. Although he once was an avid hunter and fisherman, he told a reporter in 1932 that he had not handled a rifle or rod in over 20 years. Due to the prominence of Adirondack deer hunters, the antlered heads were by far the most popular items in his business and he stated that during a 35-year stint he had mounted over 5,000 buckheads!

Downstairs in the showroom, green burlap walls served as the background for the elaborate display of all sorts of mammals, birds, and fishes — each mounted in a lifelike manner. Here one could see deer, bear, fox, beaver, otter, weasel, bobcat or porcupine. Perched or on the wing were owls, hawks, herons, woodpeckers, pheasants, ducks, geese, and grouse. From local waters came trout, northern pike, bass and even the lowly perch. This type of exhibit would have gladdened the hearts of the Federation of Fish and Game Club members if it had put in an appearance at the new Visitors Interpretation Center at Paul Smiths! From foreign lands came such exotic skins as tiger, leopard, wolf, and Kodiac bear, together with caribou and big hom sheep trophies. Outside, on the front porch, stood the most photographed bear in the Adirondacks — not one of our local black bears but a pure white polar bear from the far north stuffed and mounted in a ferocious stance with outstretched front paws and bared teeth. Many local children and tourists posed with an arm around the awesome creature while grinning into the camera with feigned bravado.

The shop stood at the entrance to the village on route 3 where it was highly visible to visitors. The polar bear seemed to beckon the traveler to come inside and look around. Those who responded to the invitation were rewarded with a tour of what appeared to be a still-life zoo. Children could see close at hand denizens of forest and stream.

As Dickert established the security of a profitable income he turned his talents to the interests of his community. He involved himself in village affairs both political and educational by taking part in the administrations of these functions. He sat as a village trustee for a dozen years and was elected village president in 1921. Always interested in the local school system, he served on the board of education for many years. His career as a successful businessman in Saranac Lake paralleled that of many others who came here from metropolitan areas to seek their fortune in a less hectic atmosphere, but, unlike many others, he did not arrive as a consumptive. His tenure, however, took place during those prosperous years of village growth so closely related to the health industry.

Apparently, Charlie enjoyed good health until the final three years of his life when he suffered from asthma. Born in New York City on January 13, 1867, he died in Saranac Lake on July 13, 1942, at the age of 75. Both of his parents came to New York from Germany, a common example of how immigration frequently benefits our country by bringing a special talent to our shores. From his arrival here in 1886 Dickert survived to enjoy those developing years of our local history, from stagecoach to automobile, from remote settlement to incorporated village, and from the one-room schoolhouse to a solid high school system.

Due to the generosity of his old friend, Dickert's life work has been immortalized in a special manner. When the plans were announced for the expansion of the Saranac Lake Free Library, Ed Guggenheim offered to donate an additional building wing to house the combined accumulations of both his own and Dickert's collection of taxidermy. The gift also included a fund for the operation and upkeep of the museum as well as care for the remarkable display of mounted wildlife displayed there.

Today, 47 years after Dickert's death and 17 years after Guggenheim's passing, the "Charles Dickert Memorial Collection of Mounted Wild Life" is available for public viewing during the summer months. 1 The attraction has been appreciated by our own schoolchildren, tourists, nature lovers, and sportsmen thanks to the rare ability of a former resident and the philanthropy of his lifelong friend.

TAXIDERMIST DIES HAD PRESERVED GAME AND BIRD PRIZES OF MANY

Charles L. Dickert, 75, of Saranac Lake, died Monday morning at his home after an illness of five years. He had resided there for 56 years, and his skill as a taxidermist was known thruout the United States.

For many years Mr. Dickert was active in the civic life of Saranac Lake. He was a Republican and a member of the Saranac Lake council for eight years, and served as president of that body in 1921 and 1922.

He was village commissioner for three years and a member of the local board of education. Mr. Dickert also was an active member of St. Luke's church and belonged to the local lodge of Masons. He was affiliate with the Knights Templar.

Mr. Dickert was born Jan. 13, 1867, in New York city, the son of the late John and Amelia Seidel Dickert. He received his education there. Following his graduation from the public schools in 1881, he studied under the celebrated taxidermist, Frederick Sauer.

In 1886 he came to Saranac Lake and served as taxidermist with H. H. Miner. Mr. Dickert then opened his own business in 1904 at 16 Algonquin ave., and has since conducted taxidermy at that address.

1. The Collection is now open all year round whenever the Saranac Lake Free Library is open.