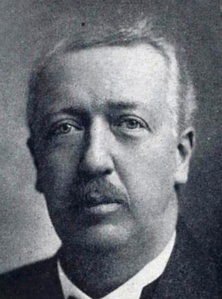 Charles Moseley Swain was a financier and founder of the Philadelphia Record. At his death in 1904 he left a fortune of $1,800,000. He was the son of William M. Swain, of New York, and Sarah James, of Bristol, England. He was educated in private schools and in Crittenden Commercial School and Saunders Institute in Philadelphia, and attended the law school of the University of Pennsylvania. In 1867 he entered the law offices of Samuel Hood, where he studied for four years, and was admitted to the Bar in 1871. He continued in the active practice of his profession until 1886, when he was elected president of the City Trust, Safe Deposit and Surety Company of Philadelphia, where he worked until his death.

He served as a member of the common council from 1896 until January 1, 1902, when he resigned because of ill-health and lack of time to perform conscientiously his duties as councilman. Although not in active practice for nearly twenty years, he kept up his acquaintance and friendship with his colleagues at the Bar, and was a member of the American Bar Association and of the Lawyers' Club. He was also a member of the Union League and of the Art Club. For years he was active in the Masonic fraternity, in which he held high office. Mr. Swain will be remembered as a man of modest, retiring disposition, with a warm regard for his friends, all of whom held him in the highest esteem.

The beautiful Nathan Strauss cottage on Lower Saranac Lake has been sold to Charles M. Swain , a wealthy trust company president, of Philadelphia, Pa., for $35,000.

Boy Scouts of this village were competing in a ten dollar prize contest for the best knot board. The prize was being offered by Charles Swain, who desired such a board as a decoration for his camp on Lower Saranac.

Mr. and Mrs. Charles Swain of Merion, Pa., who formerly owned the Swain camp on Lower Saranac Lake last have arrived here for a visit and are staying at Hotel Saranac.