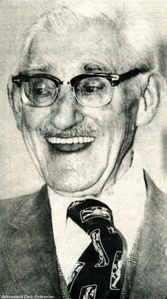 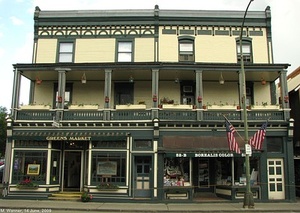 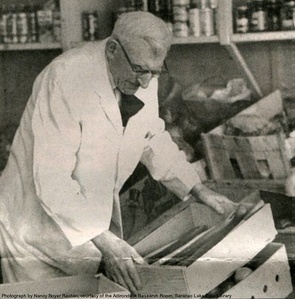 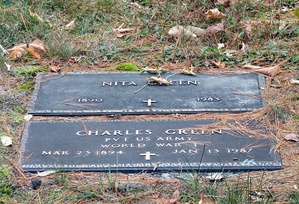 Charlie Green operated Charlie Green's Market (and its predecessors, the Oneida County Creamery and the Grand Union) on Main Street in Saranac Lake for more than sixty years.

Charlie Green is dead at 92

SARANAC LAKE — Charles "Charlie" Green, whose Main Street grocery store boasted "The Sweetest Window in Town" for some 60 years, died early this morning at the General Hospital of Saranac Lake.

Green, who died shortly after midnight, was 92, and had been a patient at the hospital for about a week.

The spritely, mustachioed Green sold milk and eggs and every other conceivable grocery item to generations of Saranac Lakers. They grew to know Charles Green's Foods of Quality, near the Newberry's parking lot, as simply "Charlie's Corner Store."

But he was more than a shopkeeper with a twinkle in his eye and a smile on his face. He was a civic-minded individual who, like many others, came to Saranac Lake for his health and stayed on to contribute to the community.

In 1977 he was named Citizen of the Year by the local Chamber of Commerce, which recognized him for his "impact on the growth and development of Saranac Lake."

At the time, Green, who was born in Lancashire, England, on March 23, 1894, reminisced about how he first came to Saranac Lake for the healthful atmosphere.

"I came for a month, but my mother said I could stay for two if I had to," he related. Many years, stories and shopping sacks later, Green was a fixture at his 49 Main St. establishment, over which he made his home.

Along with his late wife, Nita, who died in 1983, Green thought of closing the doors and retiring in 1982. His many customers, however, would not hear of it. A Daily Enterprise story at the time noted that so many patrons protested the plans that Green relented and remained in business.

And while the Charlie Green of the 1980s is remembered as a silver-haired merchant who grabbed canned goods off high shelves with a twist of a hook-tipped pole, his recognition in the community goes back further.

In 1969, he was presented a "Good Neighbor Award" for what was called his "kindly, good-natured manner." Local columnist Bill McLaughlin noted the award was given more particularly for Green's "many acts of continuing kindness to young and old, the infirm and those especially in need."

Over the years, he was also honored with the Dedicated Service Award for the New York State Masonic Grand Lodge, an organization Green joined in home of his youth, New Jersey. In addition, the Lions Club honored him in 1985 for 45 years of membership and work with the local service organization. 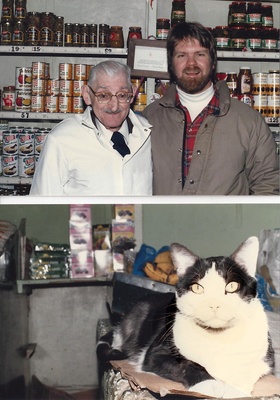 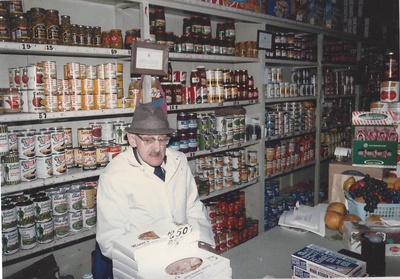 Charlie Green in his store, courtesy of Peter MacIntyr For all his good works, however, Charlie Green was best known as a grocer — an occupation that let him chat and socialize with customers in a tradition that lent much to his store's reputation for friendliness.

Until the end when illness forced him out of the store, Charlie continued to mark down the prices of each item on the grocery bag with a heavy dark pencil; then he would add up the column repeating each number out loud and very clearly enunciating each word in slight British accent.

On the occasion of his 90th birthday in 1984, Green, wearing his trademark white grocer's coat, vowed to remain behind the counter until he was 95. He failed to make it, but still gave Saranac Lake more than 60 years of himself and his life.

Green leaves a brother and sister in New Jersey, and an especially close niece in Mohawk.

Funeral arrangements are incomplete with Keough and Son Funeral Home. However, calling hours are tentatively scheduled for Wednesday and Thursday, with funeral services expected Friday at St. Luke's Episcopal Church.

Charles Green was a grocer who knew his onions.

He served his customers — rich and poor, old and young, famous and infamous—with an added measure of courtesy from his market here at 49 Main St. ("Foods of Quality"). His glasses magnified the friendliness which sparkled from his eyes like sun on lake water.

"Wait," he'd say to a woman departing his store into a rainstorm, " I'll put up the umbrella for you."

He reckoned bills on brown paper bags with a pencil, writing prices in half-inch high numbers.

"I add them up myself," he said in his later years, "to keep this..." pointing to his white-haired head..."going."

Into his 90s, he lugged purchases to cars.

"I don't feel my age," he said, knocking wood. "I always knock wood when I say that."

Mr. Green died early Tuesday at the age of 92 in the General Hospital here after suffering a broken hip last week.

Villagers knew him as a spry man, too responsible to be jaunty, who wore starched white grocer's coats or wrapped shin-length aprons around his 5-foot-11 frame.

His recollection was a resource as real as the local library. He'd talk to customers, reporters and historians with verve and humor.

He told, for example, of cereal heiress Marjorie Merriweather Post buying supplies for her rustic but sumptuous Camp Topridge on nearby Upper St. Regis Lake. She'd sweep the store's shelves clear of goods with an imperious wave. And her butler would order Mr. Green to get what wasn't in stock.

Legs Diamond — the gangster, who was shot to death in 1931 in an Albany rooming house — shopped at Green's market while on a visit to his brother who was undergoing treatment here for tuberculosis.

"Charlie's store," Mr. Taylor writes in setting the scene, "still has a sawdust tang in the air and apron-clad clerks who use long poles with levered clamps to hook the boxes on the top shelf. Generations of tigercats have drowsed in the window....

"Charlie in his tenth decade remembered Legs clearly," the author continues. "He and Kiki strolled into the grocery and Legs recited the order in a low, well modulated voice. The gangster could have been mistaken for a customer's man....On the other hand, comely redheaded Kiki — born Marion Strasmick in Boston—created a stir."

She wore an ermine coat.

Mr. Green's memories were sharp. He could recall his first day here — June 11, 1922 — when he stepped off the train in this mountain village known then as a cure center for the dreaded tuberculosis.

Fellow Masons in New Jersey's Copestone Lodge 147 at Kearny had chipped in a ticket and $100 for Mr. Green's trip. They'd worried when hoarseness lingered from hawking wares at a Masonic bazaar.

"I had a little TB," he said in an interview with a Times reporter on a raw April day, "but I was never in bed."

But he told others his ailment was more serious. James Rogers III, owner of the local radio station, remembers Mr. Green saying he owes his job, his health and his life to this village.

Mr. Green was born in Chorley, Lancashire, England, on March 23, 1894. He learned his trade there from Harry Hindle, an independent grocer. His father, Hubert, was a butcher who heard friends tell of America, the land of hope and opportunity.

So Hubert Green came to the United States.

Besides his mother, Ada, the others included brother Jack and four sisters, Barbara, Dolly, Bessie and Ivy.

Survivors include his brother, Jack, of Montclair, N.J.; his sister, Bessie, now Mrs. James Spencer of Hackettstown, N.J., and several nieces and nephews. His wife, the former Nita Parsons, who worked in the store with him, died Jan. 29, 1983.

On arriving in the United States, Mr. Green's father continued work as a butcher in Harrison, N.J. His son joined New Jersey's 78th Division Medical Corps in 1917. After World War I, the veteran became a store manager for Mutual Grocery Co. and joined the Masons in 1920.

When his hoarseness lingered, Masonic friends financed Mr. Green's trip here. Although he intended to stay for only a month, he stayed for a lifetime.

As that first summer edged into autumn, he received a letter from Copestone Lodge member Bill Jones with a $150 check.

"It gets pretty cold in Saranac Lake," the letter said, "so buy your self some long underwear."

He bought the underwear, some boots and ski pants.

"I never did wear any of them," he recalled, "except the red flannels a couple of times."

His funeral will be at 11 a.m. Friday in St. Luke's Episcopal Church. Burial will be in Pine Ridge Cemetery in May.

Lions Club and Masonic services will be conducted at 8 p.m. Wednesday and Thursday, respectively, in the Keough & Sons Funeral Home.

He was a past president of local Lions Club, a vestryman of St. Luke's Church, a past master of the Whiteface Mountain Masonic Lodge 789 and a member of the Adirondack Shrine Club of Lake Placid, the local Fish & Game Club and the Chamber of Commerce.

Over his almost 65 years here, the community has recognized Mr. Green with a Good Neighbor Award in 1969, a Citizen of the Year designation in 1977, special king of Winter Carnival in 1978 as well as citations from the Masonic Grand Lodge, the Lions Club and North Country Community College.

And, on his 90th birthday in 1984, elementary school children and the high school band serenaded him at his store.

Mr. Green liked that because he liked youngsters.

A tribute to Charlie Green

Written in 1977 by Susan Doolittle, at the time he was named Citizen of the Year.

In March 1979 Mr. Green had a cat named Pumpkin; a picture of the cat relaxing in Charlie's store made the front page of the Adirondack Daily Enterprise on 3/27/1979.