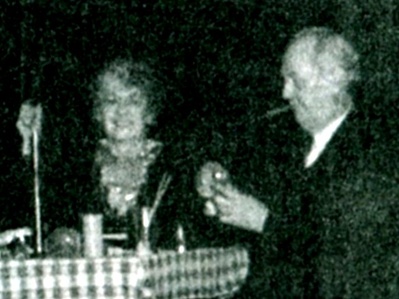 Charlotte Dewey was the 3rd of eight children born to Dennis and Mary Ann (Gaffney) in Franklin Falls. Her siblings were Edward, Frederick, Mary Alma, Elizabeth Katherine, Ellen Rose, Margaret and Frances Estella.  Edward was the only one to have children.

Charlotte Dewey ran a religious gift shop at 73 Main Street, for many years. In her forties she began a relationship with photographer William Kollecker that continued until his death in 1962. Although they never married, they traveled together, and she eventually moved into a separate apartment on the same floor as his in his building.

Miss Charlotte Dewey, 80, who ran a religious gift shop at 73 Main Street, Saranac Lake for many years, died early today at Saranac Lake General Hospital of a long illness. She was a life-long resident of Saranac Lake.

Funeral arrangements, which are incomplete, are in the charge of the Keough and Son Funeral Home.

Brewster Guests See Themselves on Screen.

Mr. and Mrs. Jesse G. Brewster entertained a number of their friends in an unusual manner at their home last Friday evening. Mr. Kollecker, of Saranac Lake, who spent some time in Florida, this winter taking moving pictures, showed scenes in which some of the guests present appeared as characters on the screen which made it most interesting. After the movies the guests were conveyed to the Country Club where refreshments were served.

The guests of honor were Mr. and Mrs. Edward J. Nolan, of Chateaugay, who had been spending their honeymoon in Lake Placid. A decorated cake, topped with a miniature bride and groom, was presented to them. William Dwyer acted as toastmaater and Supervisor Wells offered some advice as to the best roads to happiness.