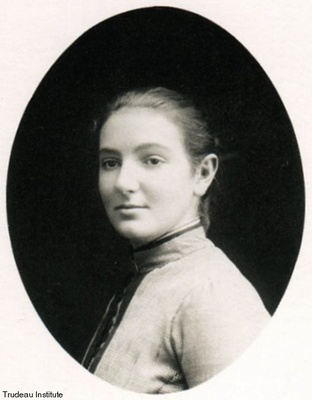 Charlotte Trudeau, known as "Chatte", to distinguish her from her mother, Charlotte Beare Trudeau, was the daughter of Dr. Edward Livingston Trudeau. She died of tuberculosis, age twenty.

Chatte was a strong, athletic girl, with a vigorous body and eyes as black as coal. She was very fond of rowing, tennis, riding horseback and all violent exercise, and had never shown any sign of illness. Ned was slighter, but very wiry and active. We had had either a tutor or a governess for the two children, but when Chatte reached the age of sixteen my wife and I decided she should have more opportunities in her education and in coming in contact with other young people, and so in the fall of 1887 we sent her to a girls' school in New York City.

At first her letters and the accounts we received showed us she was homesick and not very happy, but in January she wrote she didn't feel well and our friends said her appetite had fallen off and that she had indigestion. I laid all this to the confinement of school and city life, but as she did not seem to get any better I began to be anxious, and finally wrote her to come home for Easter and let me take a look at her. I met her at the train and brought her home, and I never shall forget the shock her appearance gave me. From a plump, robust young woman she had changed to a pale, listless girl, and as she went upstairs to see her mother I went into my office and shut the door. The terrible truth flashed upon me as I remembered how my brother appeared when he was taken ill and came to see me in Newport. I knew it was the same old story, and I felt stunned and had to wait a long time to get hold of myself again before joining the family circle.

The last winter of Chatte's life she suffered so constantly that it was a terrible strain to us all. As I worked in the little laboratory I could always hear her constant and harassing cough, and for the last three months of her life my wife and I were with her for some part of every night. My one consolation was that with drugs I could relieve her when necessary, but it was a terrible strain to withhold the relief when we thought it unwise to give it. She died on the night of March 20, 1893, and after she had gone my wife and I, though stunned by the blow we had been expecting so long, could not but be thankful that her suffering was at an end.

We decided to have the funeral at St. Luke's, and lay Chatte in the little churchyard at St. Regis by the side of the baby, who was sleeping there under a little white cross.