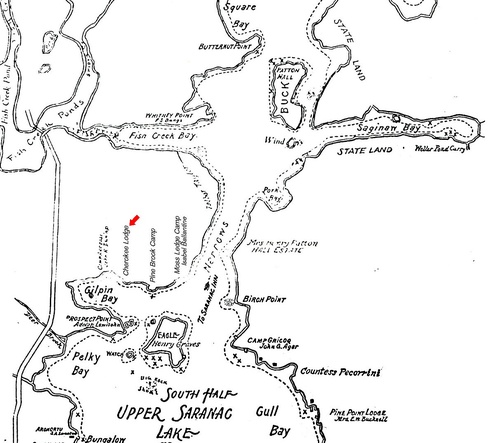 ON THE UPPER SARANAC

Between Camp Aradosia, [sic (Arodasi); now Camp Forestcraft] where the Andersons are staying, and the Morton Camp [Pine Brook], is located Cherokee Lodge, the property of W. H. Jackson of New York. One of the merriest parties inhabiting the lake camps this season is to be found here. Among others there now are Miss Jackson and her sister, Mrs. W. E. Woodford, besides Mrs. F. R. Bremner, Miss Knox and Pendalton Duffy. Mr. Woodford and Mr. Jackson will arrive this week, and expect to remain during the greater part of the summer. An additional cottage was built at this ramp this season to accommodate the friends of the Jacksons, and two naphtha launches are constantly in commission. These little boats, known as the Cherokee and Gilpin Bay, are among the speediest on the lake.

Mrs. E. W. Bucknell has been spending several days at her camp, Pine Point, and Mr. and Mrs. W. H. Jackson and the members of their family will be among the early July arrivals at their camp, Cherokee Lodge.

ON GILPIN BAY, UPPER SARANAC LAKE
One of the most complete and attractive Camps in the Adirondacks consisting of about 100 acres of first growth timber land, with a frontage of about 1,300 feet on the lake; main dwelling has 11 rooms and two baths; another five rooms, bath and separate laundry; another three rooms and bath; another four rooms, bath and kitchen; separate building with dining-room, butler's pantry, kitchen and servants' dining-room; Guide's house with two rooms and bath: Amusement hall containing pool table and piano, boat house with library or sitting-room; launch house, ice house and other necessary outbuildings; Full supply of linen, silver and bedding; there are three launches, a full supply of ice and wood.

For sale or rent on attractive terms.
For photographs and full particulars see
Fred'k Zittel & Sons

…Among the persons who witnessed the regatta were Mr. and Mrs. George W. Perkins, who came from Cherokee Lodge, on Gilpin Bay, where they are spending several weeks in quietude…