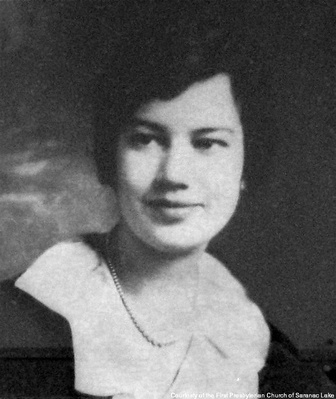 Miss Christine Burdick was employed by the First Presbyterian Church of Saranac Lake from 1928 to 1933 as the "Parish Visitor"— she visited tubercular patients who were on bed rest, in local sanatoria, cure cottages, and private homes, providing for the spiritual care of those living with tuberculosis. In 1928, she made two thousand visits.1 At the church, she led the youth group and assisted with prayer services.

She was a graduate of the Boston University School of Religious Education and Social Service. After Saranac Lake, she moved to Ithaca and worked for the Cornell Cooperative Extension Service, providing training to small rural churches for Sunday Schools.  She married a Presbyterian Minister, the Rev. Orville Bosley, and together they served three churches, the last of which was the first integrated Presbyterian Church in Rochester. In later life, she became a teacher and was instrumental in launching the NYS Master Teacher Program.

ROCHESTER — Word has been received here, of the death of Christine Burdick Bosley, a Rochester teacher for 14 years and wife of the Rev. Orville G. Bosley, Wednesday in a Genesee Hospital after a long illness.

Mrs Bosley, 70, of 2488 Oakview Drive, was graduated from Boston University.