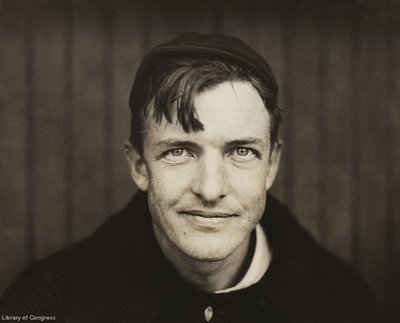 A brick at the Saranac Laboratory has been dedicated in the name of Christy Mathewson by Rich Loeber. Born: August 12, 1880, Factoryville, Pennsylvania

Playing primarily for the New York Giants, Christy Mathewson was one of the greatest baseball pitchers of all time, winning thirty or more games in the regular season four times, throwing three shutouts over a period of six days against Philadelphia during the 1905 world series. In 1913, he pitched 68 consecutive innings without walking a man. In five seasons, his earned run average was under 2.0; in 1909 it was 1.14. In eleven World Series Games, he had an ERA of 1.15, and completed ten games, two in extra innings. He completed 434 of 551 games started over seventeen seasons. He struck out 434 batters and won 373 games. He still leads the National League in total games won and is tied for third place for all of baseball. He was one of the famous "First Five" baseball players inducted into the Baseball Hall of Fame when it was first established in 1936. 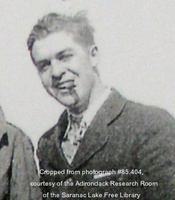 He served in France as a Captain in the chemical warfare division during World War I. In June, 1920, he was diagnosed with TB. He moved to Saranac Lake by July 1, 1920, living first in the Santanoni Apartments, under the care of Dr. Edward N. Packard. He improved slowly. His former teammates held a double-header to help pay his expenses; at the game, a baseball autographed by Babe Ruth, President Warren Harding, Vice President Calvin Coolidge and Mathewson was auctioned off. By June, 1922, he had improved to the point that he threw the first pitch of the season opener between Saranac Lake and Plattsburgh. By December, he seemed to be nearly cured, and the following year, he became part owner of the Boston Braves. He also did charity work for the effort to cure tuberculosis and to aid its victims.

Meanwhile, Christy Jr. had graduated from Saranac Lake High School with honors in 1923; later he attended Bucknell University. It was late in 1924 that the Mathewsons moved into the house that would be known ever after as the Christy Mathewson Cottage. Matty was involved in a car accident driving between Saranac Lake and Lake Placid in July, 1924, in which his arm was injured. By the end of the year, his health had deteriorated, but he didn't lessen his workload. Then in April 1925, he caught a cold during Spring training in the south with the Braves, and the cold didn't go away. He returned to Saranac Lake, and bed rest, but on October 7, 1925, he died. The baseball world was stunned.

His wife remained in the house on Park Avenue until the early 1950s, when she returned to her hometown in Pennsylvania.

Along with Babe Ruth, Ty Cobb, Honus Wagner, and Walter Johnson, Christy Mathewson was one of the first five inductees in the Baseball Hall of Fame, founded in 1936. 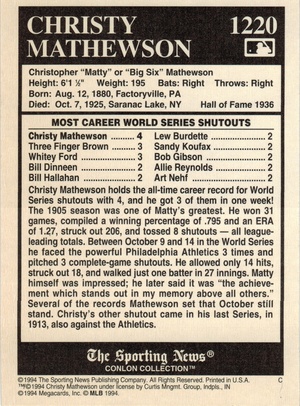 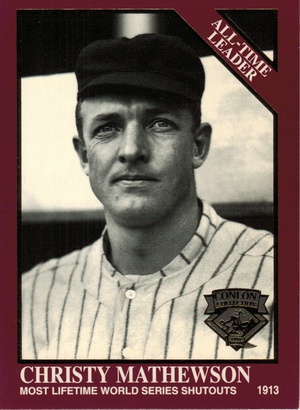 Major League Games to Be Played for Matthewson Memorials at Saranac Lake and Bucknell College.

Christy Matthewson [sic], most beloved of the great baseball players of the country for his splendid manhood, who died of tubercular pneumonia at Saranac Lake last October, after a brave fight for life, is to be honored by memorials there and at Bucknell College where he first began his career as an athlete. Funds for these memorials are to be provided by two major league -baseball games to be played this season, the proceeds of which will go entirely for this worthy purpose.

The first memorial game will be played May 28th, on the field of the Boston Braves, of which Matthewson was president, between the New York and Boston 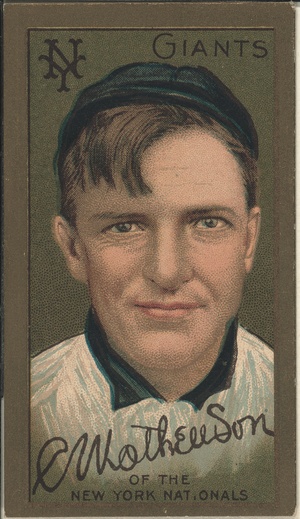 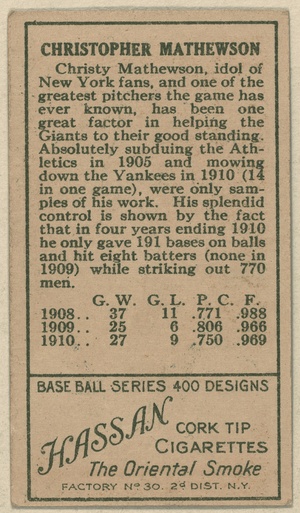 A national memorial to the late Christy Mathewson, baseball's most beloved hero, to be known as the Christy Mathewson  Memorial erected at Saranac Lake, was given the endorsement of the American Legion at the May meeting of the National Executive committee at Indianapolis.

The Legion, leaders in the field of baseball and friends are taking an active part in establishing the memorial to "Matty."

Thu purpose of the memorial is "to perpetuate the name of Christy Mathewson by a fund to be used to aid the sick and needy who come to Saranac Lake for treatment from all states in the union; and by the establishment of a Mathewson Memorial club house for the use of World war veterans with the aim of improving their physical. intellectual, ethical and social nature."

Construction work on the memorial building will be started this summer, according to Edward W. Cady. Jr., Legionnaire of Jackson A. Matthews Post and executive chairman of the project.

The big leagues are doing their part towards financing the memorial by staging benefit games. On May 28 the first benefit game was played at Braves Field, Boston, between the Giants and the Braves. A memorial tablet to Matty was unveiled before the game. The tablet read in part: “In memory of Christopher Mathewson — gallant sportsman, courageous soldier, kindly gentle- man."

The second game for the memorial will be played between the Washington American League baseball club and the New York Giants on July 7.

Christy Mathewson was an active member of Jackson A. Mathews Post of the Legion, which is made up entirely of disabled veterans. While in Saranac Lake he became greatly interested in the welfare of the disabled and was instrumental in establishing a welfare fund and a veterans' club. The Christy Mathewson Memorial will perpetuate these two things in his name.

Among the officers of the memorial are Emil E. Fuchs, president of the Boston Braves, president; John J. McGraw, manager of the Giants, first vice-president; Judge Kenesaw M. Landis, baseball commissioner, director, and Harry C. Wilder, department commander of the Legion in New York, director. National Commander John R. McQuigg, of the Legion, is a charter member of the memorial.

Benefit Performance at Boston Swells Project to Honor Mathewson SARANAC LAKE, Nov. 19 — Saranac Lake's Mathewson memorial fund will be enriched by more than $4,000 as the result of a theatrical benefit staged in Boston under auspices of the Boston National League .baseball club, of which Christy Mathewson was president. A letter from Edmund P. Cunningham, secretary of the Braves, to Edward W. Cady, Jr., local chairman of the memorial, gives the following report on the benefit. “I am pleased to announce that the midnight performance for the Christy Mathewson memorial at the Metropolitan theater was a howling success. Approximately 2,000 people were turned away. I received a check yesterday for $4,000, which I turned over to Ralph Eastman, who is treasurer of the fund here.

"There will be more coming as the management of the theater desired to hold back about $100 in case any bills cropped up during the next few days. I will get the returns and full statement from him. This I shall turn over to Mr. Eastman, and I also shall make a report to you.

“It was a wonderful performance, with Al Jolson being manager of ceremonies and DeWolf Hopper reciting 'Casey at the Bat,' which was most appropriate on such an occasion. We had a bill of 12 acts, and seven of them were headliners. We had excellent co-operation all along, and our only regret was that the seating capacity, instead of being 4,300, could have been 7,000 or 8,000.

An article about Christy Mathewson, titled "Pitcher's Duel: When Tuberculosis Fanned a Giant in Saranac Lake," appeared in the September/October 2006 issue of Adirondack Life. The author was Marshall S. Berdan. The article includes a photo of a convalescing Mathewson, with cane, in front of a Saranac Lake home he rented, 90 Park Avenue, in about 1921.