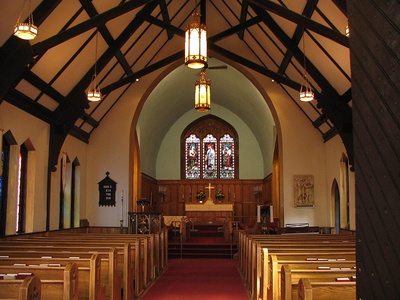 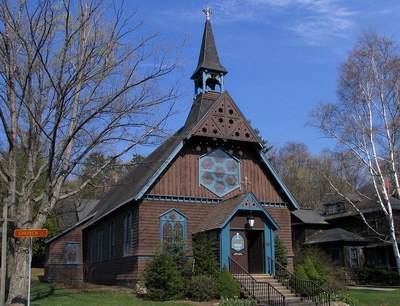 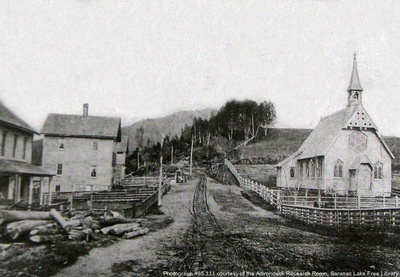 St. Luke's in 1879. According to Donaldson, "on the left are "Gray, Slater and Bullard (Conklin's) houses." Adirondack Daily Enterprise, November 1, 2008 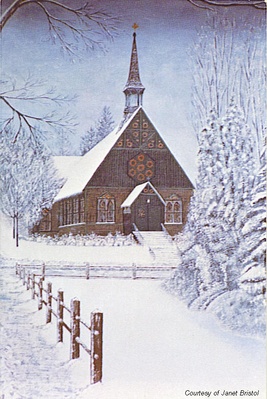 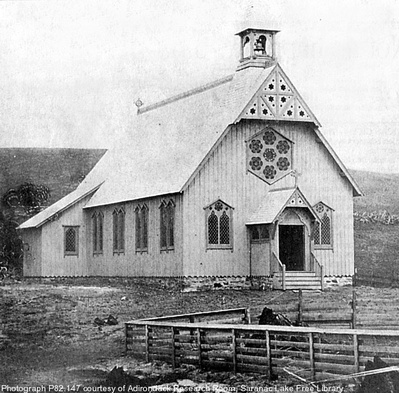 In this early view of St Luke's, the landscape around it was barren, and the bottom edge of the original board and batten siding, later covered with shingles, can be seen along the foundation, cut to points in a version of Stick style. The streets were unpaved, stumps were in evidence, and Dr. E.L.Trudeau's yard in the foreground was surrounded by a board fence. His first house was built there in 1883. The Episcopal Church of St. Luke the Beloved Physician, built in 1878, is Saranac Lake's first church. The church was established in 1877, with services held in the Berkeley House by Reverend John Lundy, who began a fund drive that was taken over by Dr. Edward Livingston Trudeau after Lundy left. Trudeau carried the building project to completion, and served as treasurer and warden for thirty-eight years.

The plans were a gift from Richard Mitchell Upjohn (1828-1903), son of the architect of Trinity Church in New York City. The church was built — at today's 136 Main Street — by local contractor R. Eugene Woodruff; construction began in May 1878 and was completed in January 1879. The church was expanded in the 1890s with the addition of a rectory and a parish hall that served as the village library for fifteen years starting in 1892.

In the early years the interior was very plain, with no carpeting, no choir stalls, and minimal furnishings. Two huge wood stoves heated the place; they were stoked while hymns were sung.

Mr. Elmer P. Miller, brother of Seaver A. Miller and postmaster J.H. Miller, was made a deacon of the church in 1889. The present altar was built as a memorial to him after his death, by the Altar Guild.

In 1938-39, the sanctuary was enlarged, and new paneling, altar and reredos, and the windows in the chancel were rearranged creating a side chapel and a new sacristy.

The church is a one-story, wood-frame Gothic Revival-style church that was designed by architect R.M. Upjohn. It has board-and-batten and shingle siding, a small open bell tower, decorative vergeboard in the gable end that was rebuilt in the late 1980s, and a gabled entrance enclosure. The fenestration is regular and symmetrical, and includes paired, pointed-arch stained-glass windows in the chancel, and a rose window in the western wall. The interior woodwork includes the original wooden scissor trusses. 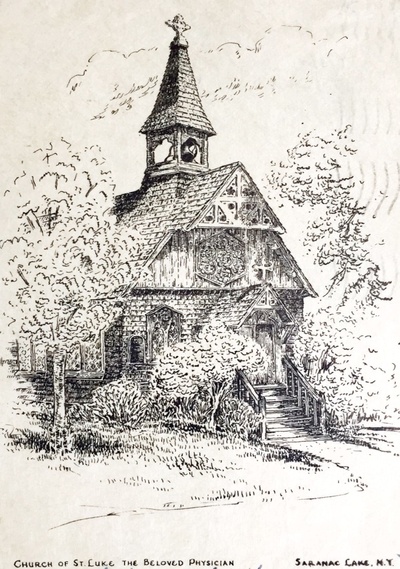 An early postcard of St. Lukes (undated)
Courtesy of Shelby HinesIn "The Penny Piper of Saranac," Stephen Chalmers wrote in an Author's Note: "During Stevenson's stay at the Baker Cottage . . . the Church of St. Luke . . . had recently been built. Stevenson's mother, who was staying with him in Saranac Lake, was much interested in the church's affairs. It is well known that the author had a strong aversion to hero-worshippers and lion-hunters—especially of the more inquisitive sex; so when Mrs. Estella Martin, a member of an old Adirondack family, drove up to the cottage to confer with Mrs. Stevenson about a proposed church supper, R. L. S. took refuge in his 'cubbyhole' study and firmly shut the door. His mother prepared tea for the guest and suddenly said, 'I would like you to meet my son, Louis.' Mrs. Martin, who had heard of the novelist's pet aversion, felt slightly nervous. Mrs. Stevenson went to the study door and there followed a whispered colloquy through a mere chink. Presently, Stevenson came into the room, sat down by the stove, and, after a strained minute or two, asked Mrs. Martin if he might smoke. The moment his cigarette was alight the ice was broken and — 'I had two hours of R. L. S.,' says Mrs. Martin, 'and he was the most interesting man I ever met.'"

"Later, it was planned to give the church benefit supper at the old Berkeley Inn in the village. On the promise of Stevenson’s mother that she would induce her son—somehow—to be present, the church ladies sold every available seat, except one—that reserved for the lion of the occasion. Despite the elder Mrs. Stevenson’s assurances, up to the last moment Robert Louis refused to be a party to the party. 'Good Heavens!' he exclaimed. 'They might ask me to make a speech!'”

"In the end the ladies had to kidnap him bodily. At first he was silent, even morose, when he took his seat at the supper table in the old inn; but suddenly the humor of the situation struck him and his chameleon-like mood changed color. He threw himself into the affair with a spirit than was more Stevensonian than churchlike. He not only proceeded to enjoy himself, but helped to make that church supper a memorable success; and before he escorted his mother home, he insisted upon making a speech."

"All record of that speech is lost—more’s the pity! Mrs. Martin does not remember just what he said, but – 'It was—like him.'”

—Dr. Seward Webb, hearing of the loss of the Christmas remembrances of St. Luke's Sabbath School, when Dr. Trudeau's Sanitarium at Saranac was destroyed by fire, sent a check for one hundred dollars, saying that he wished the children a Merry Christmas.

Note: The sanitarium was not "destroyed by fire" in 1893. The news report undoubtedly referred to the loss of Dr. Trudeau's house, which did burn in 1893 while the Trudeaus were away in New York City. As Mrs. Trudeau was very involved with St. Luke's parish, just across the street from their house, it is very possible that Christmas gifts for St. Luke's Sunday School were being hidden at their home to surprise the children. 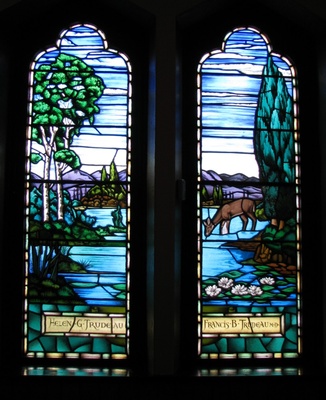