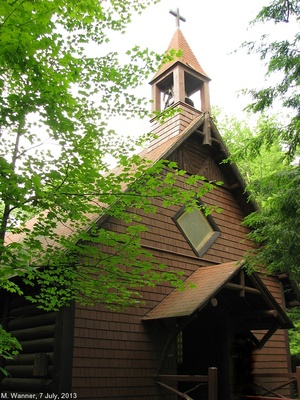 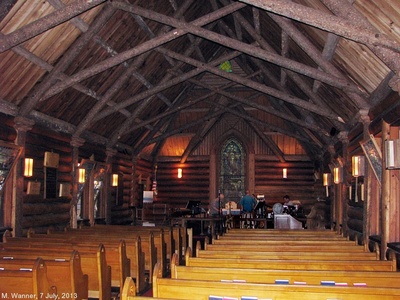 Church of the Ascension, interior 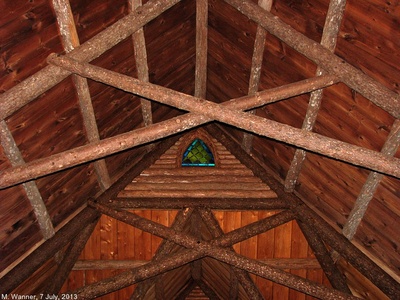 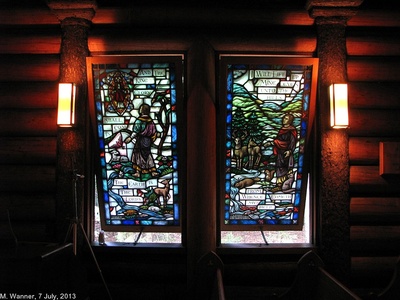 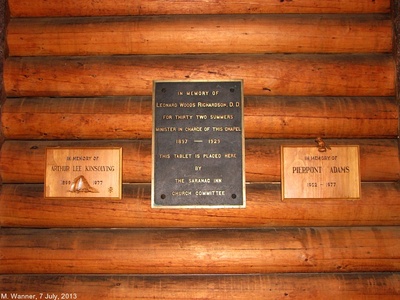 Built by: Branch and Callanan

SARANAC INN — A bell rings three times on the soft summer air and strains of "Rock of Ages" float through the trees.

It is Sunday morning at the Church of the Ascension in Saranac Inn, which is this summer celebrating the 100th year conducting services at the little log church on the hill overlooking the Saranac Inn Golf Club on one side and the waters of Upper Saranac on the other.

In honor of that 100 years, members of the church will have a 5 p.m. worship service this Sunday and then meet for a church picnic.

Worshippers find the church by way of a short road between the Saranac Inn Post Office and Route 30. A small wooden sign announces the usual 11 a.m. service and points to a pine covered uphill driveway. A drive up that hill brings one to a long, log building in a clearing surrounded by large, stately evergreen and maple trees. These block much of the surrounding view and give one the feeling of being in a place apart from the hustle and bustle of the world.

A few wooden steps lead into the church and onto a red-carpeted aisle. Fifteen pews, enough room in each for about six people, line each side of the room, and the carpet leads onward to the small altar.

An organ sits in front of the right-hand pews, a baptismal font stands in front of the left-hand pews. The font is unique. Most of the church exudes the colors of the forest — green, red and brown — but the three-foot high font is a dusty grey-white with ferns and winding leaves etched in white into its sides.

Large stain glass windows line the sides of the room and although they show many of the traditional religious scenes, a closer look finds that the church's own personal history is also etched in the glass. Small Adirondack animals can be seen in many of the scenes, and in one window the glass shows a man sitting in a rowboat. The church's pastor, the Rev. Charles Sheerin, Jr., says this is a picture of former pastor, the Rev. George Robertshaw, depicted at his favorite pastime, fishing on Upper Saranac Lake. Rev. Robertshaw was pastor for 27 years, between 1937 and 1964.

There have been 10 clergymen at the church since its founding, most notable are the Rev. Dr. Leonard W. Richardson who served for 32 years from 1897 to 1929, Rev. Robertshaw and Rev. Sheerin, Jr.

Rev. Sheerin's love for his church is found partly in his description of it. He calls it "a shy little violet by a mossy stone". He talks with pride of the church, its history and of the people who worship there. He has been pastor since 1966.

Rev. Sheerin says about 50 to 80 people come to church in July, with that number swelling to 100 to 120 in August. He holds the more traditional Episcopal service each Sunday and says he "tries to relate the gospel to what is going on in the world." He also officiates at marriages and baptisms. His daughter was married there this summer. He expects two baptisms by September.

He welcomes all, even the small animals who come into the building when it is empty of worshippers. He points to a log on the altar rail showing where a red squirrel has nibbled away the outer bark, and smiling says, "He does little damage". There are no traps set to rid the building of the small field mice who sometimes come in. There is no evidence the animals harm the building.

That building, smaller in size than today, was built in 1884. No one is sure of the exact date construction was begun, according to a pamphlet written on the church. (The August 24 celebration is held knowing no record of groundbreaking is available.) A group of summer residents in the area started the project. The names of Ward, Gibbens, Riddle, Dunton, Peabody, Blagden, Bangs and Chandler number among the most prominently mentioned in the beginning history of the church.

The first record of a worship service is Sept. 6, 1885. A stagecoach brought many to the services in the next few years.

By 1902 a church committee of 21 members had been formed and drew up an agreement with the Upper Saranac Association which owned the property. The agreed upon annual rental fee to the Association was $1.

In 1903 a fund raising campaign brought in $360, and this was used for repairs, shingling and to build a porch, to build steps and a boat landing, and buy prayer books. The building logs were chinked with moss at a total cost of $8.

There was also discussion of enlarging the church at a cost of $1,200. A total of $1,337 was quickly raised and the executive committee decided the church should be cut in half between the chancel and the pews. The chancel end was to be moved directly back and a new 24-foot section to be inserted. A new robe room at the rear was to be added. Five new windows were also installed as well as 15 new pews. The project just about doubled the size of the building and the work was done for $1,250 by Branch and Callanan of Saranac Lake.

The roof was reshingled then, and those cedar shingles still seal the roof today.

The first service in the enlarged church was held July 3, 1904.

It was also in that time frame that a rectory was built down by the lake. It remained in Association hands until 1947 when church officials bought the property for $7,500.

In 1916, according to the church record, the Upper Saranac Lake Association said it would no longer pay one-half the cost of maintaining the church. The committee maintained the building for the next four years without the money and until needed repairs, were again evident. The church committee then asked parishioners to help, $3,000 was raised and repairs done.

In 1923 there was talk of again enlarging the church, but this was quickly vetoed.

The next important step for the church occurred in 1935 when the committee decided to incorporate as the Saranac Inn Chapel, dropping the name Church of the Ascension.

It was 16 years before the next big event when the church property of about 2.4 acres was bought from the Upper Saranac Lake Association for $2,600.

Two years after that in 1953 the committee changed the name of the church back to the Church of the Ascension.

When the church bells toll this Sunday it will be only one week away from its final summer of 1984 sounding. September 2, the last summer service will be held.

The worshippers won't be back until next summer, but most will probably return because Rev. Sheerin says they feel, as a parishioner said long ago, "When I am in the little log church on the hill I feel nearer to God than anywhere else on earth."

Tomorrow morning at 11 o'clock in the Church of the Ascension, Saranac Inn, Augustus S. Blagden, president of the Board of Trustees, will felicitate the rector, the Rev. Canon George A. Robertshaw, on the occasion of the 20 years which he has been rector of the summer congregation.

From "One of the great resorts—Saranac Inn," one of Howard Riley's columns, You Know What?

Charles Wooters and Margaret Slaughter . . . were married by Father Ed Gallagher in the Church of the Ascension at the [Saranac] Inn in 1944, which was then a Catholic Church. There is still a stained glass window in the church donated by her grandfather. Mrs. Wooters said the Catholics outgrew the church, it became a Protestant Church and Masses and other services for the Catholics were then held in the Casino. It was a beautiful building on the lake where parties were given and movies and dances were held on alternate nights of the week. 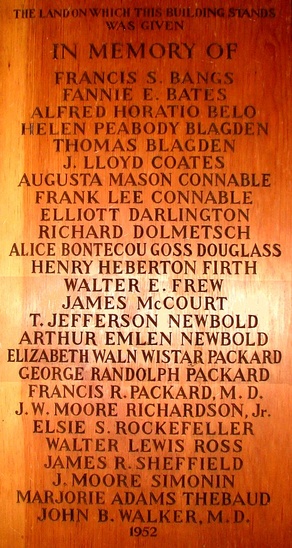 A wooden plaque in the church reads:

Since its founding, the following clergymen have officiated: