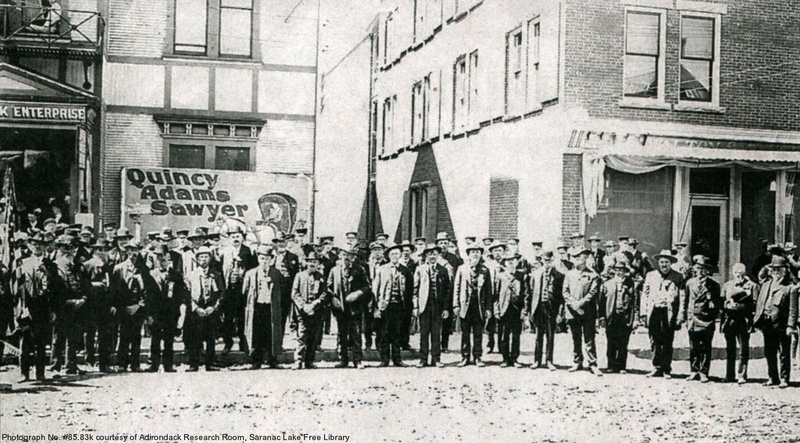 On Memorial Day 1905, local Civil War veterans at a meeting of Francis M. Bull Post No. 621 of the Grand Army of the Republic held a parade and were photographed outside the Harrietstown Town Hall by William Kollecker. This photo was given by Alfred A. Moody. While they are not individually identified, among the veterans shown are "Comrades Flanders, Peck, Walker, Foster, Shea, Baker, Cronk, Munn, Segua, Paye, McNulty, Blinn, Hatch, Daniels, Slater, Hathaway and Morton." The late Betty Pratt, a volunteer in the Adirondack Collection of the Saranac Lake Free Library, made an extensive study of local Civil War veterans in 2001. Her typescript lists the names of all the men whose service was documented from any source, including gravestones and census records. From this we can learn the first names of some of those listed, including Henry McNulty, whose service record notes that he was "away in the woods." Adirondack Daily Enterprise, September 24, 2011 The following area residents are known to be veterans of the American Civil War. Those few that appear on another list on this page are marked with an asterisk. 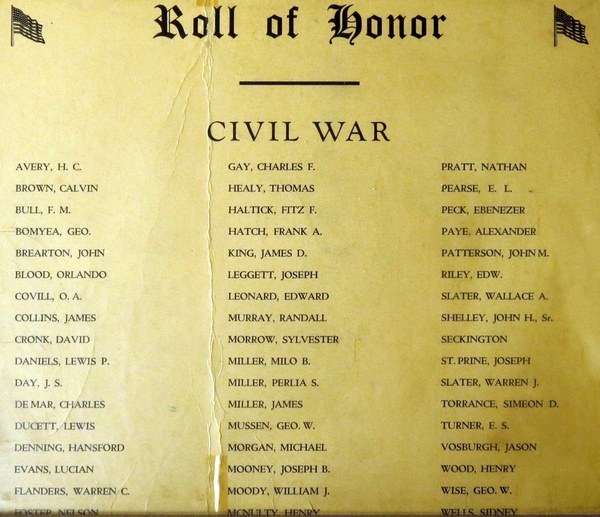 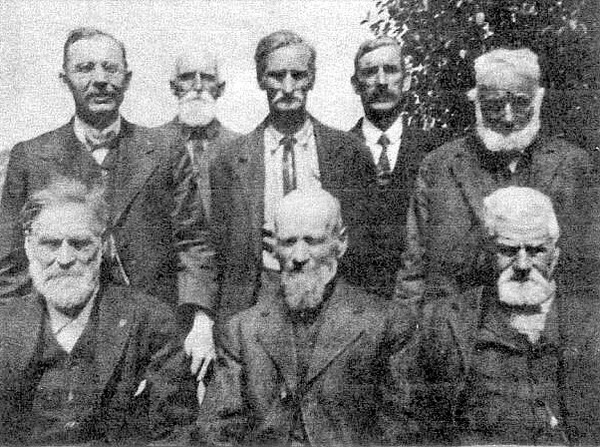 From History of Franklin County, New York (reprint, Plattsburgh, NY, 1978), page 492. The following list of those who enlisted from Harrietstown during the late war of the Rebellion was kindly furnished by Van Buren Miller. [It has been rearranged, alphabetically by last name. Those that appear on another list on this page are marked with an asterisk.]

From History of Franklin County, New York (reprint, Plattsburgh, NY, 1978), page 497. The following enlisted from the town Brighton during the war of the Rebellion: [It has been rearranged, alphabetically by last name. The one name that also appears on another list on this page is marked with an asterisk.]

MAY 22.—Memorial day will soon be here and let the good people of Saranac Lake observe it in a manner that will show that they have not forgotten the boys who marched from their homes to do battle for their country during the dark days of the rebellion, especially those that are dead, and let us go to the cemeteries and pay them a tribute of love by scattering beautiful flowers on their graves. Let all business be suspended and all citizens that can join in the services on that day. The program of the day will be as follows: The members of Lennon Post, G. A. R., of this place will leave Saranac Lake at 8 A. M., accompanied by the Saranac Lake band, and go to Bloomingdale and join their Post there. After decorating the graves there they will return to Saranac Lake accompanied by Lennon Post, No. 490, Dept. N. Y., G. A, R., and a large delegation of citizens from Bloomingdale and surrounding towns, arriving at Saranac Lake at 12 o'clock noon. The line of march will then be formed, the right resting near the Berkley house, in the following order: 1st. Cornet band of Saranac Lake; 2d, colors; 3d, Lennon Post, No. 490, Dept. N. Y., G. A. R.; 4th, a band of young ladies dressed in white the daughters of veterans, bearing the floral decorations; 5th, speakers of the day in carriages; 6th, Saranac Lake Lodge, No. 891, I. O. G. T., in regalia; 7th, Woodruff Hose company; 8th, citizens from Bloomingdale and surrounding towns and Saranac Lake. Line of march: Down Main St. to River, up River to cemetery, where the ranks will be broken and memorial services be held. After this the line will be reformed in the same order as before and march to the grove where dinners will be served by the ladies. After dinner the Hon. Capt. S. A. Beeman, of Malone, will deliver the Memorial address. The Glee Club of Saranac Lake will furnish the singing. People that do not bring their eatables with them will be furnished with a first-class dinner for the small sum of 25 cents each. Dinner tickets sold on the grounds near the entrance to the tables. Capt. J. H. Pierce, Marshal of the day; Capt. J. C. Ware, orderly. Parties wishing to contribute flowers will please leave them with committee at the library…

They will be met as a body at the railroad station by the local W. H. LaMoy Relief Corps and the Lake Placid band. Dinner will be served at noon at the Methodist Church followed by a patriotic service. At the conclusion of the service an interim of social discourse will be enjoyed, and a supper will be served at 5:30 preceding the departure of the visiting veterans and friends.