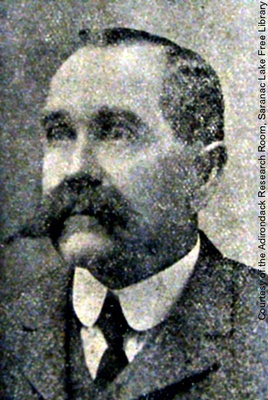 Clarence A. MacArthur was hired by A. C. McCollom in 1873 to help run the McColloms Hotel, and in time, bought him out. When the hotel burned in 1906, he built a larger hotel from lumber cut and milled on site, and added a golf course. He increased the hotel's holdings to 600 acres.

C. A. McArthur who is now proprietor there [McCollums] was born July 21, 1852. In 1873 he came to where he now lives and took charge of Uncle Mac's [A. C. McCollom] hop yard and farming in general, and soon went in company with him. When Uncle Mac began to get feeble he gave up all control of the property to Mr. McArthur, and the latter then built a fine hotel in connection with the old one, which has developed into a fine summer resort. For hunting at any time of year when the law will allow it, there is no better place in the Adirondacks.

Mr. McArthur relates a good anecdote in relation to Paul Smith. A few years ago Paul and O. D. Seavey, Hotel Champlain, went to McColloms for a few days of fall hunting. One day McArthur, acting as guide, took them to Rice Lake, only a little ways from the hotel. Mr. Smith went across the lake with McArthur to watch, and Paul went in another direction. Before long a deer came in, not far from where Mr. Seavey was, and he began shooting. Paul started out toward them and had not got far before in some way he tipped over the boat and went down out of sight, but soon came up and pushed the boat to where he could touch bottom. He stood there for some time with only his head and shoulders out of water. Mr. Seavey and Mr. McArthur saw it all and when they got around to him they asked him how it happened. He said he jumped out on purpose, as the bullets were flying around so that he thought he would rather be underwater out of the way of them and that he would rather be drowned than shot.