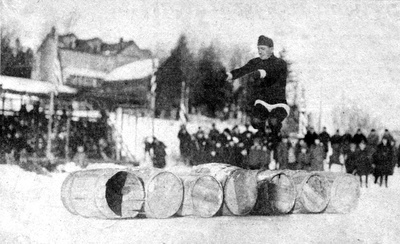 Claudius Roux Lamy was famous as a speed and trick skater, brother of Ed Lamy and Ernest Lamy. He was listed by the Conservation Department as a guide in 1920. He was a son of Ferdinand Lamy.

He was a World War I veteran; he is listed on the Essex County's Honor Roll of those serving in World War I.

He was the son of Emma DeLisle and Ferdinand C. Lamy and a lifelong resident of Saranac Lake.

Mr. Lamy was a World War I Navy veteran and had been a painter for area contractors.

Like his late brothers, Edmond and Ernest, he was an exhibition barrel jumper. He had appeared in ice shows at Madison Square Garden in New York City with his brothers and had performed throughout the United States and parts of Canada in 1979, he made his last appearance in Atlantic City, N. J. at the famed Boardwalk Auditorium.

Mr. Lamy will repose at the Keough and Son Memorial Chapels. Visiting hours will be 7-9 p.m. Wednesday with private family services to be held Thursday.

Jack Grabowski, New York Yankee catcher, left the Adirondacks after several days of hunting with a good sized buck that he brought down near Saranac Lake. He went, into the woods with Fred, Ed, and Claudius Lamy and others. He took the deer to his home in Schenectady.