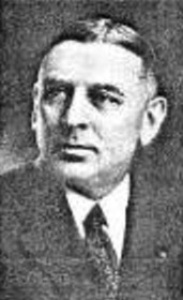 Clinton J. Ayres was a major real estate and insurance broker. Ayres Insurance was located in the corner office of the Berkeley House in the early 1920s.

His first job in Saranac Lake was with the George L. Starks hardware store. He later worked for W. C. Leonard's for a number of years before buying the one year old real estate agency of the late Edward R. Young. Later he acquired the Eddy Whitby Agency.

Mr. Ayres had been in poor health since early in the year and had practically retired from active business. Four weeks ago he was taken to the Clifton Springs sanatorium. He was 54 years of age. Mr. Ayres was well known in Lake Placid and in this section of the Adirondacks, where he was held in universal esteem as a man of wide vision, progressive spirit, and marked business ability.

Surviving are his wife, the former Miss Lilla B. Jackson; and three children, Donald F. Ayres of Kingston, N. Y., and the Misses Marian E. and Isabelle C. Ayres of Saranac Lake.