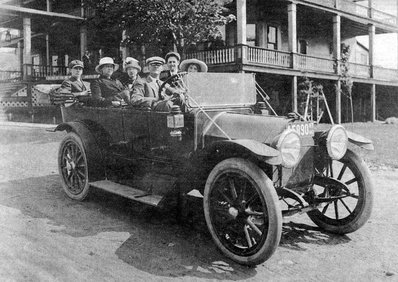 Clyde C. Cheesman was an accountant for A. Fortune and Company. In the 1930s and '40s he ran Cheesman's IGA. He lived at 20 Church Street and later at 91 Lake Street.

Mr. Cheesman had been a resident of Saranac Lake for most of his life. He had been employed by A. Fortune and Company as an accountant and also owned and operated Cheesman's Market on Lake Street during the 1930s and 1940s.

He was Harrietstown town clerk for six years, retiring in 1957.

Calling hours will be held today from 2 to 4 and 7 to 9 p.m at the Fortune Funeral Home.

The funeral service will be held at the funeral home tomorrow at 2 p.m. with the Rev. Harold Van Horn, pastor of the First Presbyterian Church, officiating. Burial will be in North Elba Cemetery in Lake Placid.

Memorial donations may be made to the Saranac Lake Adult Center or the First Presbyterian Church.

A farewell beefsteak dinner in honor of Clyde Cheesman was held in the Harmony Club room in the Masonic Temple on Monday night. Mr. Cheesman, who has been drafted, left Wednesday for Ithaca where he will take up the subject of photography from an aeroplane, one of the essential features of modern warfare.

The dinner was well attended, and Arad Stevens in the capacity of chef received the congratulations of all on his ability as a cook.

Speeches and toasts marked the occasion, in fact each guest was expected to say or do something.

Mr. Cheesman's host of friends, especially among the younger set, with whom he is exceedingly popular, as well as the NEWS, wish him Godspeed and a victorious return.