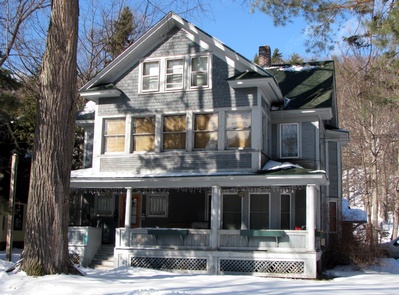 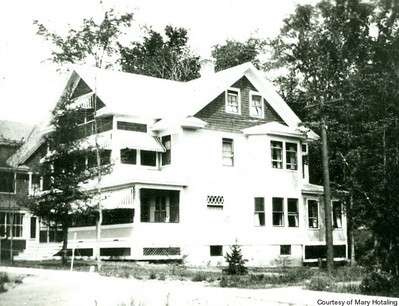 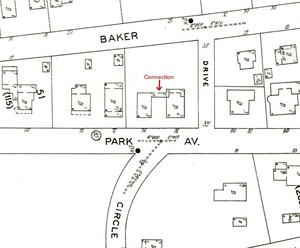 Other information: The house was built by Worthie Colyer by 1910. He deeded it to his wife, who owned it until 1941.

Ruth Collins, the head nurse in the infirmary at the Adirondack Cottage Sanitarium, operated the cottage from 1912 to about 1920. According to the 1916 TB Directory, the Collins Cottage had room for twelve patients, had five cure porches and charged $18-35 per week. The next nurse to operate 76 Park Avenue — beginning in late 1920 — was Charlotte Beattie, whose husband William was a patient. Mrs. Beattie ran this cottage along with the cottage at 74 Park Avenue next door, which was connected by an enclosed walkway, as the kitchen at 76 Park Avenue served both buildings.The 1931 Sanborn maps shows this connection.

Phil Gallos wrote that an undated document (probably from 1923-25) shows that both 74 and 76 Park Avenue were under Mrs. Beattie's management, and that 76 Park was a nurses' nursing cottage.

At that time, Mrs. Beattie maintained at 76 Park Avenue the Florence Banks Memorial Room, "for the use of doctors and hospital trained nurses without funds, free, for a period of 3 months. Room to be applied for thru the Society for Control of Tuberculosis." Florence Banks is buried in Pine Ridge Cemetery, without a gravestone. Burial records show that she was born in 1892 and died in 1921.

By mid-1931, the house was being operated as a boarding cottage by Mrs. Edna Sanzo and Miss Anna Seller. They were both nurses who had been patients of Mrs. Beattie's there in 1925. Later they ran a nursing cottage at 13 Riverside Drive.

Warren Garvin of 76 Park Avenue is pictured in the 1940 Canaras as a graduating senior at Saranac Lake High School.

The Collins/Beattie Cottage is listed as a contributing building to the Cottage Row Historic District on the National Register of Historic Places.

This house stood beneath one of the last great elm trees in Saranac Lake, which was dead and brown as of August 2011. See Peter Crowley's column in the Adirondack Daily Enterprise, April 30, 2010. The elm died in 2011, and was cut down in the late summer of 2012.