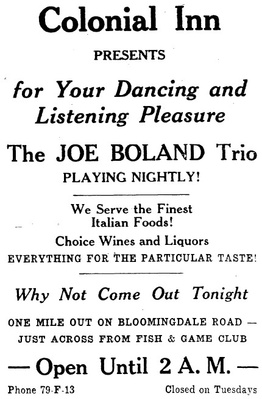 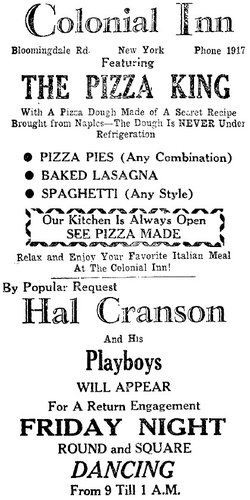 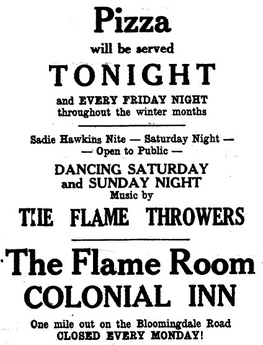 Colonial Inn was a restaurant and night club two miles north of Saranac Lake on the Bloomingdale Road from 1946 to 1956, when it burned.

Robert Puccini, owner and manager, announced today the opening of a new dance hall at his establishment, the Colonial Inn on the Bloomingdale road.

The new room will greatly augment the present facilities of the Inn. The building now houses a large dining room and private dining room as well as the dance hall which will also be used to accommodate diners.

The interior of the new addition has been done in knotty pine and craftex walling in natural color. The dance floor was laid in hardwood and indirect lighting has been used throughout.

Dancing is featured nightly except Tuesday from 10 p.m. until 2 a.m. Joseph Boland and his new trio will play for dancing. The Colonial Inn was opened a year ago by Mr. Puccini and features Italian food. Lunch and dinner are served daily as well as ala carte service and all legal beverages.

At 2:20 this afternoon, just as we were ready to go to press, the fire alarm sounded for another fire at the Colonial Inn.

Fire early yesterday morning gutted the Colonial Inn on the Bloomingdale Road despite the eight-hour efforts of the Saranac Lake Volunteer Fire Department. An unidentified passing motorist was the first to report smoke pouring from the two-story frame building's basement at about 1:30 a.m. Sunday. He notified the Saranac Lake Fire Department who arrived at the scene with three trucks and a portable pumper arid stayed at the scene continuously pouring: water on the blazing structure until 9:15 a.m. Sunday. Firemen reported their work hampered by fog which cut visibility.

Again, a speeding motorist was said to have endangered firemen's lives and threatened the laid-out when he sped past the scene driving over hoses without slowing, William Disco, one of the firemen, reported. Otherwise, no firemen were hurt.

At the time of the blaze the popular inn and restaurant owned by Anthony Brindis of 1201 Hammond Ave., Utica, had been closed for about three weeks, but it we reported that the owner planned a reopening today. The bar at the inn had been recently remodeled. Damage was estimated at $40,000 by Thomas Brindis, brother of the owner, who said that damage was partly covered by insurance.

The inn was built in 1946 by Carl Puccinni of Saranac Lake and had been purchased by Mr. Brindis five years ago.

The firemen said the building had been burning for some time before the department arrived with 15 men. The cause of the fire was undetermined. The building was unoccupied at the time of the fine.