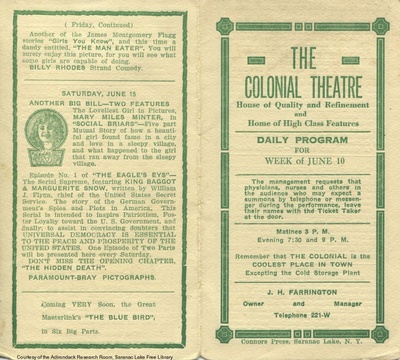 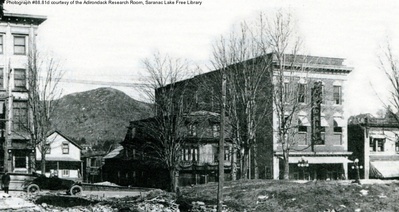 Colonial Theatre from the site of the new Post Office at the corner of Broadway and Olive Street. The theater became the Saranac Supply; today it is a parking lot. The building to its left is the A Fortune and Company Furniture Store. Adirondack Daily Enterprise, March 29, 2003. 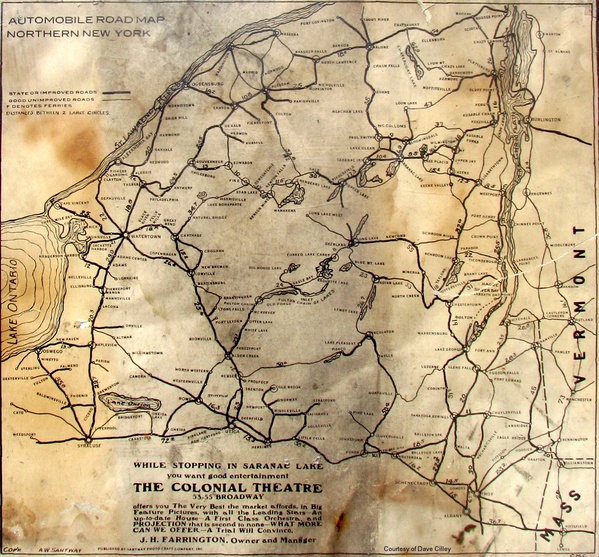 Colonial Theatre tourist map (undated). The Colonial Theatre was at 55 Broadway. 1 The theatre was built by J. H. Farrington. It had a seating capacity of 500 on the main floor and balcony. The third floor of the building was leased for five years to the Lodge of Odd Fellows. This is apparently the theatre that was nicknamed "The Itch."

It opened April 10, 1912, with a showing of the silent film, "The Common Law." 2 In the 1920s, it was bought by William Mullen, and renovated to become Mullen's Grocery and eight upstairs apartments; in 1974 the building was razed to make way for the Farmers National Bank of Malone (as of 2009, Community Bank).

Out of the Past (from the Adirondack Daily Enterprise March 28, 1912 issue) The new Colonial Theatre was to open on April 10 on Broadway which is now the site of the Saranac Lake Supply. The theatre was built by J. H. Farrington with a seating capacity of 500 on the main floor and balcony. The third floor of the building was leased for five years to the Lodge of Odd Fellows. The first movie, silent of course, was "The Common Law," a dramatization of the novel by Robert W. Chambers. The story of the opening also expresses the opinion that the erection of the theatre will increase real estate values in that section of the village.