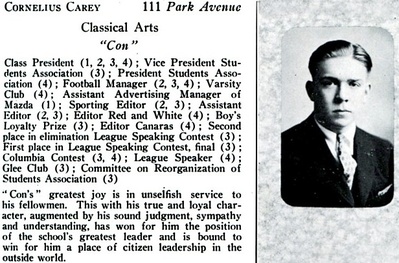 Cornelius J. Carey, known as "Con", was made Franklin County Judge for the 4th Judicial District of New York at age 29, the youngest Judge in New York State; he served for 14 years. He was a graduate of Saranac Lake High School, and of Notre Dame University in 1930. He moved to Malone in the 1950s.

He was the son of clothier Cornelius J. Carey, Sr..

Although he did not play high school football he was the team manager for the first SLHS team in the fall of 1923, and at Notre Dame he spent time as the Business Manager of the Fighting Irish football team.

Mr. Carey was born May 22, 1908 in Saranac Lake, the son of Cornelius Carey, Sr. and Mary Elizabeth Starks. He graduated with honors from Saranac Lake High School. He was a 1930 graduate of Notre Dame University, and a 1933 graduate of Fordham University Law School.

In 1937, he was appointed county judge to fill the unexpired term of judge Cooney. Later that year, he was elected to the judgeship, a position he held for 14 years.

He then returned to private practice in Malone.

Mr. Carey, was a member of St. Joseph's Church in Malone, the Knights of Columbus third and fourth degrees Elks Lodge 1303, and the Rotary Club. He was past president and legal advisor of the Malone Golf Club. He served as attorney for the Malone Board of Education, and was an honorary member of the New York State Association of Magistrates,

In recent years, he had made his winter home in Florida.

He is survived by two sisters, Mrs. Elizabeth Godson of Saranac Lake and Mrs. Jeannette C. Flynn, of Crestwood; and several nieces and nephews.

He will repose at the St. Mary-Murphy Funeral Home in Malone Monday from 7 to 9 p.m. A Funeral Mass will be said Tuesday, at 11 a.m., at St. Joseph's Church.

Burial will be in St. Joseph's Cemetery.