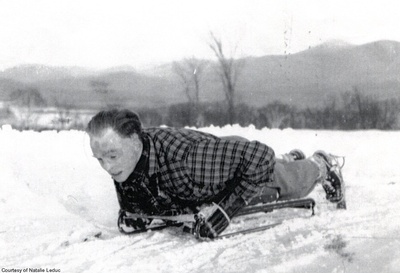 Bob Bogie riding the first Cresta sled on Mt. Pisgah, c. 1950 Cresta Sledding uses a simple sled like a luge on a twisting ice track; however, unlike the luge, the sled is ridden head-first. It evolved into the modern sport of skeleton racing. Cresta racing originated in St. Moritz, Switzerland, in 1884 on a natural, three-quarter mile course called the Cresta Run.

In 1949, Saranac Lake sportsmen constructed a half-mile Cresta Run on Mount Pisgah, patterned after the famous original ice chute in St. Moritz. Six sleds were built locally by Adirondack Welding Shop at a cost of $90 each. The last remaining sled is on display at the Mount Pisgah base lodge.

The Cresta Run was located about where today's tubing run is located; the original outrun berm is still visible along Mount Pisgah Road.