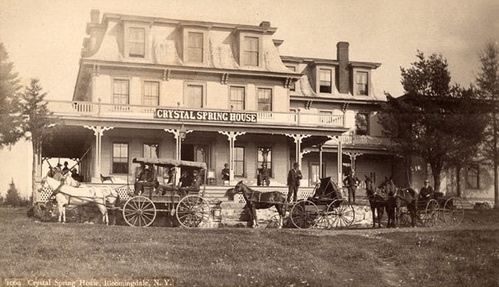 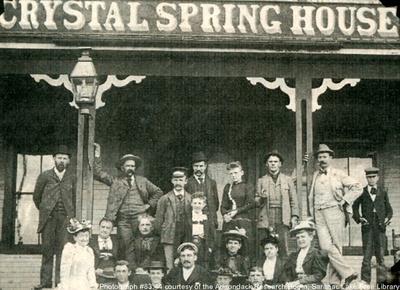 Year built: before the September of 1885

The Crystal Spring House was built by Madison Baldwin in Bloomingdale. It burned to the ground on September 10, 1895.

One of My Pleasure Trips

One beautiful afternoon, although quite warm, I drove with my friend to a little village in the Adirondacks, called Bloomingdale. On reaching there, we stopped in front of a very attractive building, called the Crystal Spring House. The proprietor, a healthy looking gentleman, (such as you often see In the Adirondacks), came to the door. He looking so pleasant, and everything so attractive, we concluded to stop over the Sabbath.

The name of this house is taken from the beautiful spring about fifty rods north-east of the building. The water from this spring is clear as crystal, and to quench the thirst it cannot be surpassed in the Adirondacks.

This house fronts the west, from which we have a line view of the St. Armand House, Stickney's Hotel, the Bloomingdale Academy, Chesley's store, Gillespie drug store, Mclntyre's hardware store, Burdick's furniture store, the postoffice, and nearly all of the private residences of the place; last, but not least of the buildings in our view is the Methodist Church, which we must say has been improved in looks by a fresh coat of white paint. In this view from the front of the house we take in nature's work, which is the beautiful hill back of the St. Armand House. Taking in the view from the east side of the house we see towering above all of the rest of the Adirondack range. Mts. Marcy and Whiteface.

I should Judge that Bloomingdale would be a good location for any one troubled with any pulmonary affection, as the elevation is several hundred feet, and the principal trees are the tamarack and balsam, from which the air seemed to be filled with aromatic fragrance.

Among the guests at the Crystal Spring House that we found very agreeable, were the Rev. M. D. Jump and son Willard, of Burlington, Vt.; Mr. and Mrs. McDonald, of Cambridge, Mass., and Miss Lizzie Brenan,of Ausable Forks.

Hoping that I shall he able to visit thls delightiful place again, I am, as ever, AD FINEM.

A new commodious hotel, first-class in its appointments throughout, with accommodations for twenty-five guests—contains 21 regular sleeping aparatments, exclusive of parlors, office, dining room, halls, bath-room and domestic department; all well ventilated and furnished in the best style. Broad piazzas, surround three sides of the house, with a 350 feet promenade.

This house is supplied with water from cold spring not distant, whence it derives its name, "Crystal Spring." The house has telephone connections with all the surrounding localities—Paul Smith's, Wardner's, Prospect House, Saranac Lake House, etc., and is convenient to telegraph and post office, with a walk of a few minutes only. Any of the above hotels can be reached by a drive of less than an hour—and good horses and carriages can always be had at reasonable rates. The commercial man, invalid, tourist, and general traveling public will find pleasant and comfortable quarters at the Crystal Spring House—a desirable resort for health, or pleasure. The proprietor, M. L. Baldwin, makes it a specialty to please the tastes and wishes of his guests in every way. BLOOMINGDALE, N. Y.

Miss Linnie Stowell, who has been one of the table girls at the Crystal Spring House, since last spring has come home for the winter. We are all glad to see her back.

The Freemason ball at Bloomingdale, on Thanksgiving, was a grand affair. Sixty-five tickets were sold. The music by Jerome Baud was very fine. The supper at Crystal Spring House is also worthy of mention.

We understand that all the rooms at the Crystal Spring House are engaged for the coming winter.

J. M. Stickney, the dentist, will be at the Crystal Spring House to-day, to remain one week.

The Crystal Spring House at Bloomingdale, M. L. Baldwin, proprietor, has lately been renovated inside and out.

Mr. Baldwin, the former proprietor of the Crystal Spring house, at Bloomingdale, has again taken possession, Willis E. Settle, the recent proprietor, having decided to relinquish the control of the hotel on account of ill health. Mr. Settle expects to remain at Bloomingdale until next week, when with his family he will go to his former home at Ballston Spa.

Willis E. Settle died at Ballston Spa last Friday afternoon, aged thirty-seven years. He was well known every where throughout this section of the State as a popular and successful commercial traveler. He first represented an Albany firm aud subsequently was for some time with E. W. Boughton & Co. of Troy, and then identified with a New York house. Several years ago his health began to fail, and to prolong his life he sought the Adirondacks, where for year and a half, and until last month, he was proprietor of the Crystal Spring house at Bloomingdale. He sold last month his lease of that hotel and went to Ballston Spa, were his death occurred. The fatal disease—and he combated it with great courage—was consumption. Mr. Settle is survived by a widow, daughter of Dr. Geo. E. Knox of Ballston Spa, and two children. He was a member of Ballston Spa Masonic Lodge and Chapter, and of Apollo Commandery of Troy. The funeral was held on Tuesday, Apollo Commandery of Troy and Washington Commandery of Saratoga attending.

M. L. Baldwin, who has owned and managed the Crystal Spring House at Bloomingdale for several years past, has sold the property to a Mr. MARKART, of New York, who has been living in the Adirondacks for his health for some time past. Mr. MARKART will manage the house himself, and expects to fill it with his city friends as guests. The house is a good one, and the sale is but another evidence of the tendency of city men to acquire all of the most desirable hotel properties in the Adirondacks that come into the market.

W. A. Robeson, proprietor of the Crystal Spring House, Bloomingdale, was a visitor to our burgh yesterday.

FIRE AT BLOOMINGDALE Crystal Spring House Burned to the Ground

Shortly after three o'clock Tuesday morning the people of Bloomingdale, Essex County, were startled by the alarm of fire. There is no fire department at Bloomingdale, and such a night alarm must bring terror to a village thus unprotected. By the time that the citizens had fairly waked up, the hotel on the hill known as the Crystal Spring House, was ablaze from one end to the other, and the flames were beyond control.

Charles Fortune, one of the employees of the house, was the first to discover the fire. He slept over the laundry, and was awakened by the odor of smoke. Upon investigation he found that the laundry room was on fire, and at once gave the alarm. Before he could obtain any help the blaze had spread to other rooms, and it was evident that all efforts must be made in getting the people out of the house. There were about thirty guests in the house, and most of them barely escaped in their night robes. Dr. Noble, who had a room near the laundry, found that exit was cut off, and in his desperate strait, threw Mrs. Noble from a second story window. She was caught in the arms of Proprietor Robeson and Mr. Allworth. Mr. Robeson was knocked to the ground and severely injured. Dr. Noble lost all of his medical works and papers. None of the personal property or clothing of the guests was saved. George Sampers, of New York, lost $2,000 worth of property and Dr. Noble's loss was fully $2,500.

By half past four the house was entirely consumed, and was a total loss, nothing being saved except some of the parlor furniture.

The guests were kindly cared for by neighbors and made as comfortable as circumstances would permit.

The citizens, by the active use of water pails, prevented the burning of adjoining buildings. The cause of the fire could not be ascertained, but it is supposed that it originated from the explosion of a lamp in the laundry. The cook, Jas. Hughes, had a narrow escape, the hair being burned from his head.

Messrs. Robeson and Sharland, who were formerly Lake George men, will feel the loss heavily. They purchased the house about two years ago from M. Baldwin, the builder, and have made a considerable success of it. It was a three story house and accommodated about fifty people. Its value is placed at $10,000, partially covered by insurance. The proprietors say they will rebuild this fall.

F. A. Streeter, formerly proprietor of the Berkeley House at Saranac Lake, has bought the site where the Crystal Spring House at Bloomingdale formerly stood, and will build a big hotel on it at once.