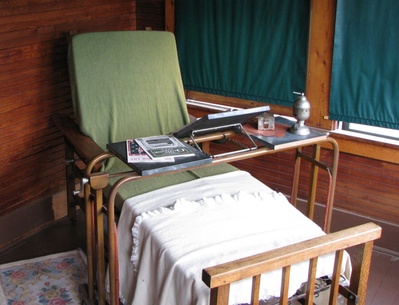 Cure Chair with typical accessories. A cure chair is a reclining chair designed to facilitate the fresh air cure of pulmonary tuberculosis. The original design came from a young physician, Dr. Peter Dettweiler, who was a patient of Dr. Brehmer's sanatorium in Germany. Bremer had founded the first sanatorium using the fresh air cure. Dettweiler devised a combination of bed and chair that, according to Dr. Lawrason Brown, who brought the design to Saranac Lake, "makes sitting out for patients without much strength a pleasure. The back was movable and with cushions it was far superior to the ordinary steamer chair. Dr. Dettweiler's chair was taken as a model when the author devised the Adirondack Recliner." 1 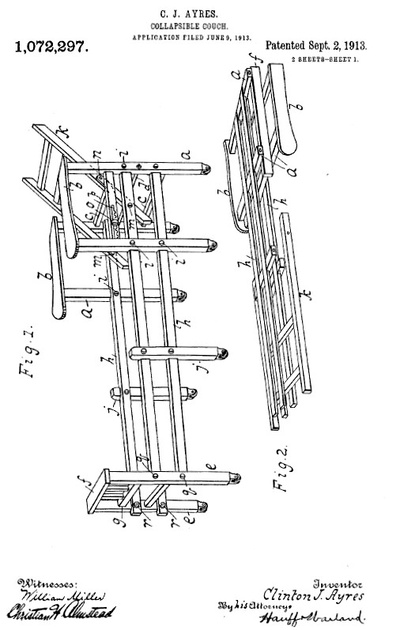 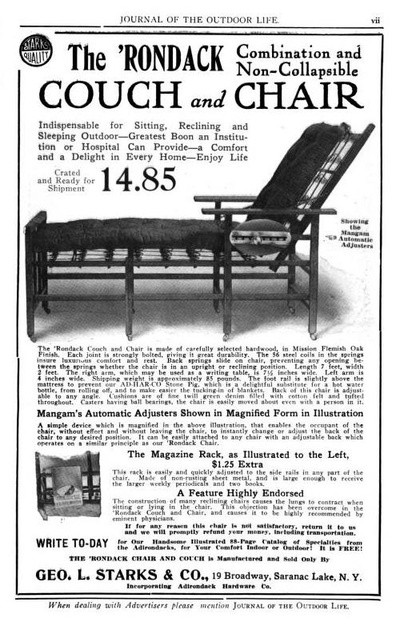 Tuberculosis patients spent anywhere from a substantial fraction to all of their waking hours in bed — not just for days or weeks but for months and, often, years. A special piece of furniture was required to accommodate the special needs of such a life— its generic name is "'cure chair"'.

The Adirondack Hardware Company manufactured a cure chair that they called the Adirondack Recliner at their building at 28 Broadway, designed by owner George Starks. It was Starks' most famous product and his unique contribution to the culture of curing and to regional craft. The Adirondack Recliner could be called simply a glorified chaise-lounge. It functioned as one, with a back that could be lowered by degrees from vertical to horizontal. Aside from that, it was built as wide as possible for comfort but just narrow enough to fit through a standard doorway. It had wide, flat armrests and a thick, firm mattress supported by a legion of coil springs and steel straps. It also was equipped with casters. Finally, it was extremely sturdily constructed of the highest quality materials.

Most of us have heard William Faulkner's famous line about the past not being dead. His wisdom is nowhere more apparent than in the Adirondack Mountain village of Saranac Lake. Here, from the 1880s to the 1950s and a little bit beyond, tuberculosis patients arrived from near and far to rest on porches, breathe crisp pine-scented mountain air, and get well or die trying. Antibiotic therapy eventually put the village's sanitariums and cure cottages out of business. Still, in architecture, memory, story, and a heart-breaking poem penned by a brilliant young woman who didn't get well, the village's rich past remains vibrant and alive.