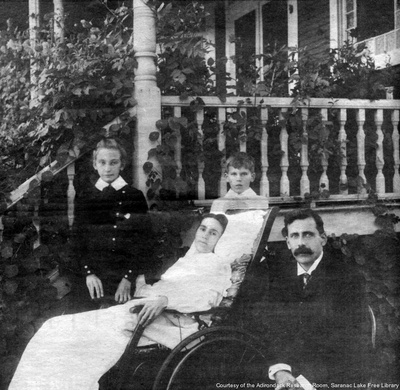 A family outside the Noyes Cottage. Adirondack Daily Enterprise, December 6, 1985

What it covers: This is the book on our cure cottages; the ideal resource for many of the articles we should be writing! Indexed and illustrated with 113 historic and present-day photos, this book is of interest to history buffs, researchers wishing to understand the Outdoor Life once lived at Saranac Lake, and to architectural historians tracing the influence of that life on buildings all over the United States. This book celebrates the cure porch and the compassionate community and triumph over disease that it represents.

SARANAC LAKE - Nobody had to tell Philip Gallos he lived in a special place when he embarked on the research and writing of Cure Cottages of Saranac Lake.

For years, the former newspaper reporter had investigated the village's unique heritage — both architecturally and as a humane haven for tuberculosis victims. His grandmother was among the thousands of tuberculosis sufferers who sought relief here; his mother was a Trudeau Institute microbiologist who also contracted the disease.

Every time a wrecking ball smashed one of the dwindling umber of cure cottages. Gallos shuddered as if wounded himself. Ugly, elephantine structures to the uninitiated eye, the cure cottages housed hope and kindness on a scale rarely seen in this world.

"I wanted to give people of this community a better sense of the value of what they have here," Gallos says. "Nothing had been done to establish the village's global role in the fate of humanity or its contribution to our architectural heritage."

Gallos this week talked about how and why the book materialized at the kitchen table of the small apartment he shares with Karen Miller. Their home is crammed with items that reflect their passions: books, records, plants, dried herbs and seeds and artifacts of Nature such as hawk wings and a bobcat skull.

Even as he recounted the book's genesis more than two years go, Gallos anxiously awaited the arrival this week of the 2,200 copies of Cure Cottages of Saranac Lake which were to be loaded that very day onto a truck by the Midwestern firm which printed the 208-page hardcover book. It contains 113 black-and-white photographs.

"I feel more relieved than anything else," he says of his reaction to the arrival of a sample copy. "More than seeing my name in the cover, what really will make me happy is if people read it and like it."

The book was published by Historic Saranac Lake Inc., of which Gallos is a founding member and occasional employee. While surveying village buildings with organization Director Mary Hotaling as part of its application for state and federal historic-district status, the pair was struck by the rich local lore they were mining. Repeatedly, Hotaling mused the material would make a great book.

Gallos agreed, but the idea remained a dream due to lack of funds. Two years ago, Hotaling applied for a new grant offered by the New York State Council on the Arts for writing about vernacular architecture. Their plans for an 80-page softcover book containing 40 photos were approved in October of 1984. The book was to focus on three areas: cure-cottage architecture, such as the evolution of cure porches; their history, consisting of chronological data about who inhabited and owned them, and most significantly to Gallos, human-interest stories about the people who passed through their portals.

"Without the people, the buildings are just objects. They do have a life of their own, but as far as their relevance to the life of the community, I felt it was very, very important to tell something of the people who owned, built, lived or died in the buildings." Gallos explains.

Once the grant was approved, he grabbed a pen and the first of many spiral notebooks he was to fill with thousands of facts about the cure cottages. He spent the next several weeks bent over the rows and rows of land records in the Essex and Franklin county courthouses. He traced the deeds to the more than 30 properties described in the book as far back as the 1830s to find out who owned them and when the houses were built. That laborious process completed, he moved on to pore over three sets of census records.

Names and places in hand, his research began in earnest. The book's bibliography lists hundreds of sources, including dozens of books on subjects diverse as TB, pottery, American architecture, baseball, and biographies of Sara and Gerald Murphy and Bela Bartok; pamphlets; directories; unpublished manuscripts, most of them by the author; periodicals: newspapers; church records; gravestones; other legal documents; maps, and personal interviews Either by letter, over the telephone or in person, Gallos interviewed dozens of people who contributed bits and pieces to the jigsaw puzzle he was putting together of the cure-cottage era.

Mostly, it was a labor of love. He says, "This community welcomed with open arms...people who were thought by the rest of the country to be pariahs. Stuff like people caring about each other moves me; there's little enough of it in this world. Saranac Lake is still a very warm and open place to be — it's a very tolerant little town."

For his efforts, Gallos unearthed some fantastic stories. One heart-wrenching vignette details how the glamorous Murphys abandoned their luminous lifestyle to huddle in a cottage here in a desperate effort to save their son Patrick Francis II. Gallos quotes a letter Murphy wrote to his friend F. Scott Fitzgerald after the boy died: "I know now what you said in Tender in the Night' is true. Only the invented part of life — the unreal part — has had any scheme, any beauty. Life itself has stepped in now and blundered, scarred and destroyed."

He also unearthed impressive nuggets about village history, such as the fact that the nation's first sanitation-minded dairy was founded on what is now the Saranac Lake Golf Club.

Sometimes small points created big mysteries. Gallos recalls he was having trouble piecing together the family history of Thomas Bailey Aldrich, a TB sufferer best known as the editor of the "Atlantic Monthly " magazine at the turn of the century. He practically had exhausted his resources when he hauled out a Boston telephone directory at the Saranac Lake Free Library and started going through the "Baileys". Gallos dialed the number of a Judge Bailey Aldrich, who replied to his query "I'm the grandson of Thomas Bailey Aldrich." Gallos got his answers.

Gallos also got a lesson in medicine and architecture. The lengthy glossary at the end of the book lists phrases such as "Gibbs surround" (a stone border around a door or window) and "heliotherapy" (a sun bath treatment for some kinds of TB).

Gallos approached the actual writing of the book in as thorough and methodical a manner as he did the research. Some chapters he rewrote seven times, for months burning the midnight oil in his cluttered home office. He wrote the manuscript in longhand, passing to Hotaling for comment pages numbered with extensive cross references to his research notes. Hotaling scribbled comments and questions in the margins, where the pair engaged in friendly but vigorous arguments about how delicate subjects should be approached.

Gallos says Hotaling found objectionable his description of the "cheesy masses" TB created within its victims. He says, "It should sound gross — it was a gross disease." The phrase stayed. Hotaling, he adds, was an enthusiastic and painstaking editorial collaborator as the project mushroomed in scope and complexity.

Barbara Parnass also made an invaluable contribution for her work to locate, select and make prints of the book's vintage photographs, many of them classic photos by William L. Distin and William Kollecker culled from the Adirondack Collection of the Saranac Lake Free Library. Parnass volunteered her time, also processing the modern photos Gallos took of remaining cure cottages.

By May, the photos were ready and the finished manuscript typed by Miller. The project had nearly tripled from its original scope. Exhausted, Gallos put down his pen, thinking his work was over.

It wasn't. He revised the text continually as the drafts were reviewed by people invited to view the manuscript. New drafts even were pasted onto the galleys. Proofreading the text was hunting, says Gallos. who estimates it was checked a total of 24 times by a handful of readers.

Then the book's designer left the project. Frantic and behind schedule, Historic Saranac Lake turned to Vanguard Type and design in Burlington, Vt., to ready the book for the printer.

Gallos found himself daily delivering materials to Port Kent to be ferried across Lake Champlain to the company. Unsuspected technical problems that arose once Bookcrafters in Chelsea, Michigan, began printing were solved during frequent long-distance telephone calls. Even this week, Gallos was on the phone pushing the printer to get the truck holding the books rolling toward the Adirondacks.

Cure Cottages of Saranac Lake is his second venture into the literary world. He received a small salary from grants for part of the project. Once Historic Saranac Lake recoups its investment, he will receive royalties on a portion of the sale of the $24 book.

Gallos, 37, also is the author of By Foot in the Adirondacks, a congenial hiking guide published by the Adirondack Publishing Co. in 1972. He was a reporter for four years at the Adirondack Daily Enterprise, studied photography with Helmmo Kindermann at the Lake Placid School of Art and holds an English degree from Towson State University in Maryland. He moved here when he was 8 years old and has lived here for 17 of the past 28 years, hiking, canoeing, skiing and bicycling throughout the Adirondacks.

Gallos also writes fiction, a genre he would like to return to once he catches his wind from the effort expended writing "Cure Cottages of Saranac Lake".

He also is beginning research in conjunction with Historic Saranac Lake for pamphlets about other chapters of local history, such as the role of tourism here.