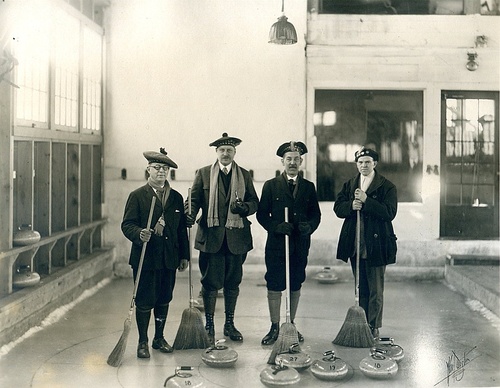 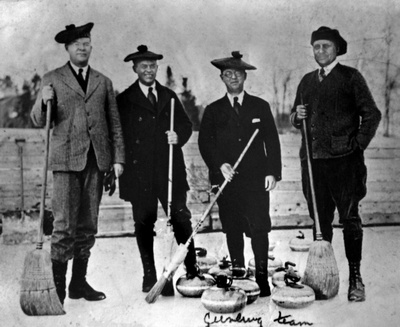 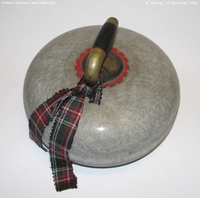 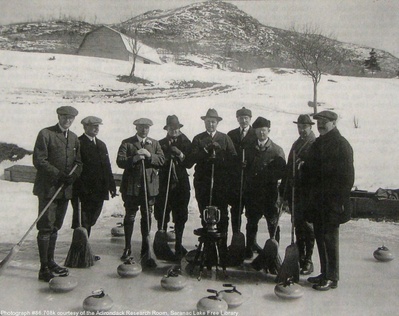 Curling on Moody Pond, c. 1910. Adirondack Daily Enterprise, January 13, 2007 Curling came to Saranac Lake in 1897. 1 Curling is a sport in which players slide stones across a sheet of ice towards a target area. It is related to boules and shuffleboard. Two teams, each of four players, take turns sliding polished granite stones weighing between 38 and 44 pounds (sometimes called "rocks") across a sheet of ice towards a circular target marked on the ice called "the house". Each team has eight stones. The purpose is to accumulate the highest score for a game; points are scored for the stones resting closest to the center of the house at the conclusion of each "end," (when both teams have thrown all of their stones). A game may consist of eight or ten ends.

The curler can induce a curved path by causing the stone to slowly turn as it slides, and the path of the rock may be further influenced by two sweepers with brooms who accompany it as it slides down the sheet, using the brooms to alter the state of the ice in front of the stone. A great deal of strategy and teamwork goes into choosing the ideal path and placement of a stone for each situation, and the skills of the curlers determine how close to the desired result the stone will achieve.

Curling came to the Adirondacks and Saranac Lake in 1897. Saranac Lake was initially home to two clubs, the Pontiac Bay Curling Club and the Pines Curling Club. They curled on Lake Flower and on Moody Pond. The Saranac Lake Curling Club was the combination of the two with the building of an internationally recognized, state of the art "ice house" in 1931, designed by local architect William L. Distin. The Saranac Lake Curling club closed in 1943 as a result of wartime economic conditions, but the new curling rink still stands, now the office and warehouse of Maddens Transfer and Storage on River Street.

"In the early part of 1913 curling rink and toboggan slide were started, curling irons being secured from Montreal and a rink laid out on the Moody lot at the side of the Boys' Club. With Thomas P. Smith, an expert curler from Ormston, Quebec, the game gained great favor.

"The first season's membership of about 35 was drawn chiefly from the leading business and professional men of the village. The following year a two rink sheet of ice was arranged on the McKee lot back of the old post office; the fact of its being covered and centrally located brought new members.

During the first year or two the sports committee functioned as officers of the club, but in 1915 W.G. Distin was elected President; Louis Kernochan, Vice President; W. L. Hoag, Secretary-Treasurer."

In 1933 the Adirondack Daily Enterprise carried an account of a curling team, of which Dr. Sidney Blanchet was the skip.

"Ice will be swept in 1998 Nagano Games", taken from an article by Joan A. Harvey.

Curling first occurred on the ice of Lake Flower’s Pontiac Bay and then moved indoors when a generous benefactor built an indoor curling rink on the lake shore from plans drawn by William Distin, a local architect and avid curler. This facility soon proved too small and a larger one was constructed across River Street in the 1930s.

1. According to Jim Griebsch, President of Adirondack Curling