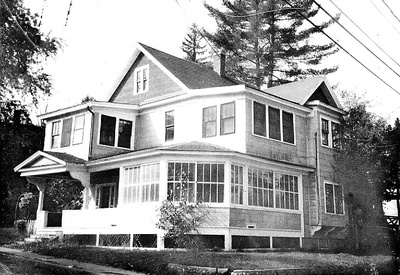 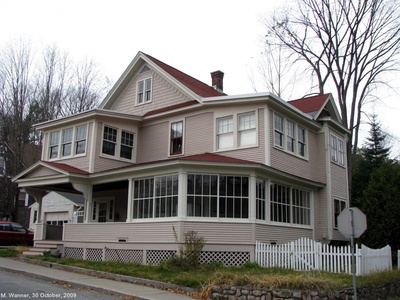 Other information: A bedroom and porch on this house have been set aside by the owner as a "Cure Cottage Museum," furnished as it might have been used by an ambulatory patient. To visit these rooms, contact Historic Saranac Lake at 518 891-4606.

The main Daigneau Cottage was located nearby, at 24 Helen Street.

From the NRHP form:  A two story cross-gabled residence of wood-frame construction, this building has a partially enclosed wraparound first floor porch and two enclosed porches at second-story level.  This house retains a high level of physical integrity with its original massing, fenestrations scheme, siding, and windows. The upstairs bedroom and porch have been outfitted as a cure cottage museum. Wood siding; wood windows; asphalt roofing.

Arthur Daigneau and his wife, Elizabeth Daigneau, purchased lots #8 and #9 in plot #12 of a survey map by George T. Chellis made in 1892. The property was purchased from Wallace Murray in 1922. Mr. and Mrs. D’Aigneau had the house built in 1923 as an annex for their cure cottage and residence at 24 Franklin Avenue (house owned in 1989 by Emil Schneider). Mr. D’Aigneau was receiving requests for more private space which he was unable to provide.

The D’Aigneau Annex was built to provide private rooms for ambulatory patients. Those housed within prepared their own food or had trays brought in from the E. Nutter house at 47 Helen Street. Some even chose to take their meals at 24 Franklin.

After Arthur D’Aigneau’s wife passed away, he moved in at 48 Helen Street. As he grew older and fell ill, Miss Helen Donnelly cared for him. Miss Donnelly, a practical nurse, was presently renting and providing care to those in residence at 48 Helen Street. When Mr. D’Aigneau passed away on September 4, 1961, he left the house and $1,000 to Nurse Donnelly as a gift “for the kindness she has shown to my wife during her last illness.” Miss Donnelly continued to rent out two or three bedrooms at all times from 1961- 1974 when on January 22 the house came under the ownership of Peter and Karen Donnelly.

Mr. Tom Durkan, who had been a boarder for years with Mr. D’Aigneau, later became caretaker and house father for Miss Donnelly. He had worked as a professional at Trudeau Institute, possibly as a chemist. He stayed on to watch over the house when Peter Donnelly rented to college students from 1974 through the early 1980s, still sleeping on his cure porch.

On March 1, 1984, Andrew and Bonnie Haaland purchased the house. It was under their ownership that the house was stripped of its asphalt shingle siding to reveal the original narrow clapboard siding. Later it was owned by Steven Lenhart and Sharon O’Brien, and later still by Leslie Dame and Paul Van Cott.

The former McCandless candy and provision store was located south across Helen Street and the former Baldwin School, which educated children of TB patients, is located to the east across Pine Street.

The late Addie Shields, Clinton County Historian, was a niece of the D'Aigneaus; she stayed with them from January through March 1937 while student teaching in Saranac Lake. She described her Uncle Arthur as a "cherub" about 5' 6" tall who worked for the Loon Lake House. Her Aunt Elizabeth Dupuis, who was "proud and tall and French," was born in West Chazy. She met Arthur at the Loon Lake House while working as a seamstress for Mrs. Chase there. The year Addie lived with the Daigneaus, Arthur's sister, Ann Daniels, had lost her house. Others Addie mentioned as neighbors included the Middletons and the Wiltsies; Betty Nutter who lived straight across the street and Mr. Nutter, who brought trays in; Tom Durkin, a patient in the house; and the two Baldwin girls.

Addie disagreed with the interpretation of this house as a cure cottage, feeling that it cast her aunt and uncle in the role of tradespersons, and remembered how beautiful the house was when her aunt was living there. She described the house as "handy as a pocket in a shirt."

From a telephone conversation with Mary Hotaling, after a visit to the Cure Cottage Museum had been televised in Plattsburgh.

Joe Hackett memorialized Addie at her death in early November 2009: "Addie Shield[s] possessed a comparable knowledge [comparable to Dr. Angelo Mariana] of the [Saranac] river and its rich history. She freely shared this knowledge with many while serving as Clinton County's official historian. Although I knew her from a research project that I had conducted during my college days, I was fortunate to become reacquainted when I worked with Addie on developing a map of the Saranac River section for the Northern Forest Canoe Trail.

"She could relate stories of the old Redford Glass operation or point to a bend in the river where arrowheads were often found. Although much of Addie's knowledge was recorded, there will be no way to capture the depth of her enthusiasm for local history and her willingness to share it with others."

From the Adirondack Daily Enterprise, November 7, 2009.