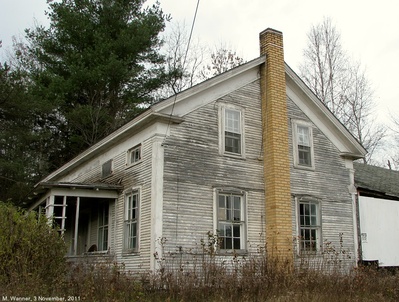 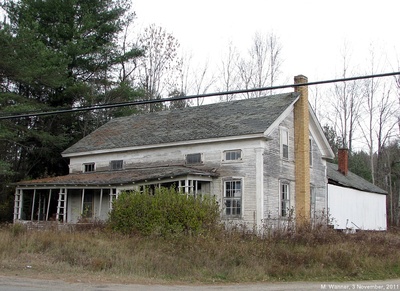 The Daniel Ames house is located on the original route of the c. 1800 Northwest Bay Road. Typical of the pattern in North Elba, the dwelling is located very close to the historic road, but not parallel to it. The house remains from one of North Elba’s settlement era farms, shown on the J. M. French map of 1858. Most of the farms shown on that map can still be found today, though they are not always easily recognizable because the land is no longer farmed or has been developed. However, North Elba’s original agricultural pattern of settlement can still be determined by following the map. The Daniel Ames house retains its historic context, and the farmlands are recognizable because they have continued in open-space use, as a golf course.

The Daniel Ames house is significant as the finest high-style Greek Revival house surviving in North Elba. Though simple in comparison with many Greek Revival houses in New York and New England, it may have been the most elaborate such house ever built in North Elba and the surrounding area. The remaining contiguous landholdings of the Saranac Lake Golf Club preserve part of the house’s context, an historic open space vista familiar in North Elba for 170 years, since Ames first cleared the land.

In 1809 when Archibald McIntyre formed the Elba Iron and Steel Manufacturing Company to make “bar iron, steel and anchors from ore, nail rods, hoop iron and every kind of iron mongery,” the ore was to be mined from beds at Cascade Lakes and “ore beds at Ray Brook, later occupied by the Daniel Ames Farm.” 1 These ore beds apparently did not pan out.

Probably early in North Elba’s resettlement period of the 1840s, and certainly by 1850, Daniel Ames had built his Greek Revival farmhouse by the side of the Northwest Bay Road in Ray Brook. Some years later, a wing was apparently added onto the rear of the house. Peacock family legend has it that when the William Peacocks immigrated from England via Canada, and walked from Malone in July 1847, they stayed overnight at the Ames farm. 2

A pioneer farmer and lumberman, Daniel Ames (1818-1898) was born in New Hampshire. He married Jane S. Blake (1818-1883) of that state in 1839, migrating to Elba the same year. A Democrat, Ames served his town as supervisor, justice of the peace, commissioner and assessor. 3 The Ameses had five children, born in the house; their daughter Lydia married Duncan Cameron, and they built the Ray Brook House, a well-known wayside inn.

One of the Ames family also established a lumber mill, for which Ray Brook road was once called Ames Mill Road. Daniel Ames made Ray Brook navigable, floating his timber down to the Saranac River and thence to Plattsburgh. 4 The 1902 Saranac Quadrangle, a map in the 1908 Delaware & Hudson Railroad timetable, and other turn-of-the-century maps show a stop named Ames Mill less than a mile north of the Ray Brook Railroad Station. 5 It seems likely that the mill was powered by the brook and that trains stopped to pick up lumber from the Ames establishment. The Ames Mill property was sold in 1902 to the Trustees of the New York State Hospital, who used it to generate electricity. 6