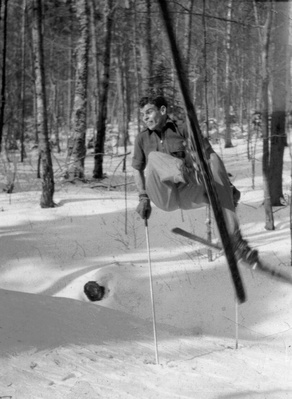 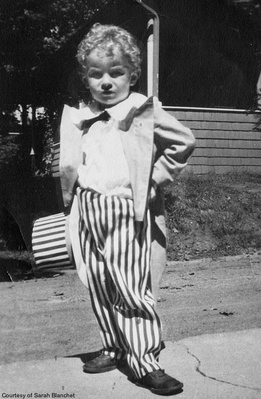 Dr. David Blanchet was a graduate of Saranac Lake High School class of 1937. 1

David Blanchet, the three year old son of Dr. and Mrs. S. F. Blanchet was one of the big hits of the Katcha-Koo production given last week. At the grand finale when the Carnival of Nations had resolved itself into a colorful background the arrival of Uncle Sam was announced. The audience who sat up expectant of some stalwart figure to appear, gasped in astonishment when the tiny man in striped trousers, blue cutaway coat and a high silk hat on his curls and surrounded by a retinue of little girls, gravely made his way down the center of the stage and took his place before the footlights.

He held his position like a veteran and seemed not at all alarmed at the applause which continued throughout number. He was presented with a boquet of roses which he accepted with the grace of a veteran actor.

SINKS THROUGH ICE TUESDAY WITH BROTHER

Saranac Lake, Jan. 25—A thrilling rescue was staged on the thin ice covering Lake Flower at dusk Tuesday when six lads crawled on their stomachs to the edge of the channel into which two young skaters had fallen while men looked on helpless from the shore.

It was a double exhibition of heroism in which Jerry Blanchet, 10, son of Dr. and Mrs. Sidney F. Blanchet of Church street, went through the ice into the chill waters in an attempt to aid his brother, David, 13.

The boys had been skating alone on the lake near the bend when David went through the thin ice, more than 300 feet from shore.

When Jerry tried to extend a helping hand to his brother, he too was plunged into the icy water. Their screams were heard by a group of boys on the shore. With presence of mind the youths quickly grabbed planks, and ropes at a nearby garage and rushed to the aid of the lads in the freezing water.

As they neared the hole in the ice where the brothers frantically snatched at the edges for support, the young rescuers extended their six-foot plank over the treacherous ice to the hole.

Charles Keough, 16, taking the end of a heavy rope, crawled out first while the other lads formed a human chain behind him. Paul Duprey, 15, came next, and in line were Ben Cross, 14; Howard Stevens, Russell Hastings, 18, and Frank Hastings 21.

Both Blanchet boys took hold of the rope and were eased onto the ice. Meanwhile, volunteer firemen responded to the call. A ladder was pushed out onto the ice and the boys completed the rescue work.

The rescued boys, purple from their exposure of more than ten minutes, were rushed to their home in the automobile of one of the bystanders. They later were reported recovered.

Unmindful of their daring heroism, the young rescuers immediately returned to the things that had occupied their attention 15 minutes before.

Firemen Get Lads With Ladder On Thin Ice

After being immersed in icy waters for 20 minutes while companions attempted their rescue, Jerry, 10, and David Blanchet, 13, sons of Dr. and Mrs. Sidney F. Blanchet, Saranac Lake, are none the worse for their experience.

The lads broke through the ice 30 feet off Gould's point on Lake Flower on their way home from a hockey practice with other members of the Glenwood hockey team and it was not until volunteer firemen with a hook and ladder truck responded that they were pulled safely to shore.

David was in the lead of his brother and had walked about 80 feet off the point when the ice cracked and gave way. Jerry, realizing his brother's plight, hastened to the rescue and approached the spot holding out his hockey stick for his brother to grab.

This device failed, however, when the ice again gave way and Jerry was plunged into the water. Meanwhile their hockey companions heard the shouts of the two boys and rushed to the scene. Charles Keough, 16, found a rope and crawled out first on the ice, holding on to Paul Duprey, 15. Behind Duprey, forming a human chain, were Ben Cross, 14; Howard Stevens, 18; Russell Hastings, 18 and Frank Hastings, 20. The rope experiment had little effect as the would-be rescuers were unable to get enough foothold on the ice to pull the pair ashore.

Encouragement was shouted to the two boys by their companions who informed them the fire department had been called.

A memorial service was held Sunday at Montview Presbyterian Church in Denver, and cremation followed in the Rocky Mountains.

He moved to Denver in 1950, where he opened a private practice in 1951 and became president of the medical staff at Rose Medical Center in 1960. He also helped to initiate the Kaiser Medical Insurance Plan and was an active member in the Denver Medical Society.

After growing up in Saranac Lake, he attended Williams College and recieved his Bachelor of Science degree from St. Lawrence University. He received his medical degree at the University of Rochester in 1943, and then spent six years doing his internship and residency at Barnes Hospital in St. Louis. He also completed two years of his residency in the U. S. Navy, and worked as a professor at the University of Colorado Medical School while working as a physician in Denver.

Dr. Blanchet retired in June of this year.

He is survived by his wife, Loraine, his children, J. David Blanchet, Mrs. Kimberly Gilbert and Mrs. Sidney Andree Blanchet-Ruth. Memorial donations may be made to Common Cause, 2030 M Street NW, Washington, D.C. or Physicians for Social Responsibility, 1515 Clarkson St. Denver, Colo. 80218. #