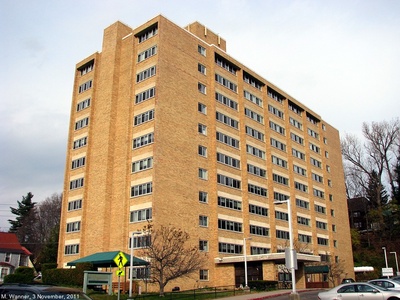 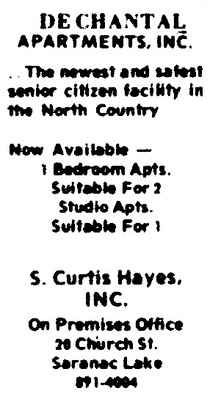 The name is variously spelled DeChantal and DeChantel.

The DeChantal Apartments, a high-rise building, was built in 1972 and opened in 1973 as a middle income "senior citizen complex" of eleven floors with 130 units, on the site of Dr. Charles Trembley's house and another cottage next door on Church Street. Most of the apartments have three rooms and are designed for single occupancy, but 44 have four rooms, and are designed for double occupancy.

The name DeChantel comes from the Sisters of the Order of the Visitation founded by Saint Jane Frances DeChantel.

The De Chantal apartments are beautiful and probably well worth the high rent that is being charged. However, the community had the impression, up until the time the rent schedule was published, that most of the apartments there would be available to couples or individuals with low incomes. Actually, only a tiny percentage of the apartments have been reserved for those living on low incomes.