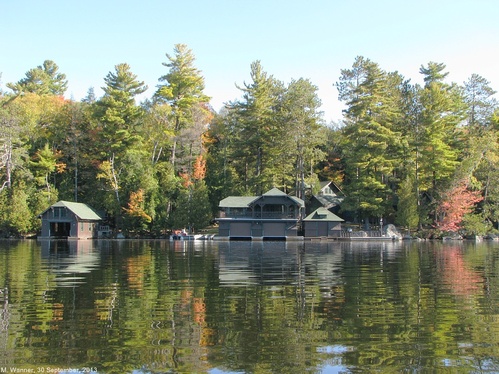 Rest-Awhile on the west end of Deer Island 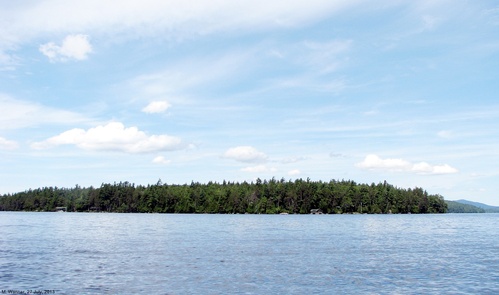 Deer Island from the south. 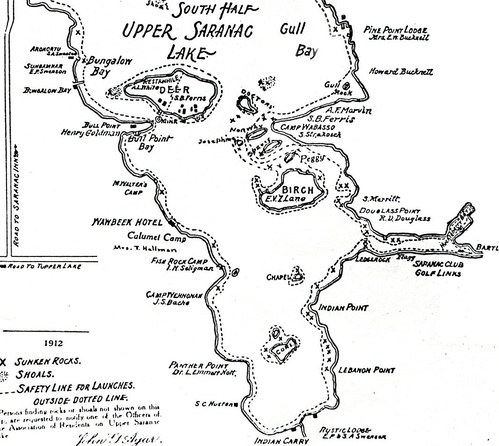 Deer Island is a 55-acre island off of Bull Point in Upper Saranac Lake. It is privately owned.

The island was owned by Sherwood B. Ferris as part of his timber empire in 1902 (and probably much earlier).  The west end of the island  was the home of the Lyon family; several generations ferried churchgoers to Chapel Island in their launch, To 'N' Fro, on Sunday mornings from 1895 to 1987. 1

The east end was bought by the Potter family c. 1950.  It presently consists of a 3.6-acre parcel on the south-east corner of the island owned by Tir-Nan-Og LLC.

The other fifty acres of the island, Bircholm (previously Camp Restawhile), was owned by the Lyons family, and was subsequently owned by their descendants. It is presently for sale.

Originally part of Col. Norton’s timber empire, [Deer Island] was later acquired by the Santa Clara lumber company run by the Meigs family. The Meigs owned a large camp on Big Wolf Lake and did not settle on Deer Island. The Ferrises, related to the Meigs, owned half of Deer Island, a part of which is now owned by Dr. Craig Potter and his wife. Alfred White bought the other half of the island from Meigs and built a camp named “Rest-Awhile.” These last names are shown on the 1912 map.

A summer resident, Dr. L. Emmet Holt, a pioneer pediatrician, owned a camp on Panther Point. He introduced a college classmate, Edmund Lyon of Rochester, to Upper Saranac. Mr. and Mrs. Lyon were principle benefactors to a school for the deaf in Rochester. They were devoted friends of Helen Keller and Alexander Graham Bell.

After Mr. White’s death the Lyons bought “Rest-A-While”, and in 1917 with their three daughters – Elzabeth (Elzie), Carolyn (May) and Linda (June) they took over the island home which Mrs. Lyon named “Bircholm.” Later she bought an open-cabin Richardson cruiser – the familiar To-N-Fro. It was 50 years old in 1979. Six generations of the Lyon family have enjoyed Deer Island. 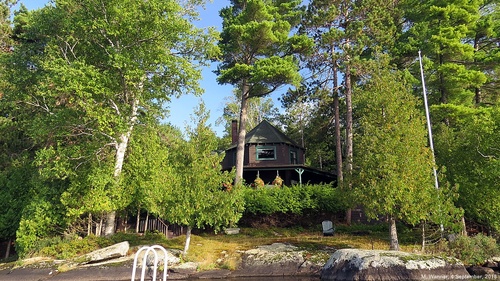 Tir Na N'Og, at the east end of the island.WAWBEEK, N. Y., July 21.—Visitors to the Wawbeek find the Indian Carry golf links much improved this season, and are taking: up the game with much fervor. D. R. Leslie is one of the enthusiasts, and Sherwood R. Ferris [sic] of Lakewood, who is in camp on Deer Island and who won the open golf tournament two seasons ago, is playing in good form…

Joseph B. Dickson, a Pennsylvania coal king has leased his two Ferris Camps on Deer island, and will bring his family here for the summer.

Sherwood B. Ferris of Lakewood, N. J. has opened Deer Island for the season. He is accompanied by his daughter, Miss Ferris.

Myron Schafer, stock broker of New York, has rented Camp Edgewater, Deer Island, Upper Saranac, for the next season. Mr. Schafer recently bought the Guggenheim launch. It is one of the finest launches on Upper Saranac and has a speed of 27 miles per hour.

Chapel Island on Upper Saranac Lake was pictured in color in the Sunday Daily News, also the interior of the church. The Rev. William Clark in his outboard and summer guests preparing to go to the island for services. Fifty years ago this summer Mr. and Mrs. Edmund Lyon of nearby Deer Island started ferrying churchgoers from points around the lake to services in their launch, and since 1929 the Lyons' twin daughters, Mrs. John Van Voorhis, and Mrs. Francis Remington, have provided this same neighborly service in their launch.

Boy and girl scouts from area camps are the members of the choir. The Presbyterian-sponsored church welcomes worshipers of all races and nations. The quiet dignity of the church provides an ideal atmosphere for its worshippers. The boat leaves Deer Island at 10:15 a. m every Sunday in July and August.

Robert W. Utting, H.K., and Mark Goddard, H.M.3, returned last evening to their base at the U.S. Naval Hospital, Charleston, S.C. Utting had been staying with his parents, Mr. and Mrs. W.L. Utting, of 155 River street, and Goddard visited his mother on Deer Island, Upper Saranac.

The late Brig. General Russell J. Minty of Rainbow Lake was honored at a dedication services Sunday at Island Chapel, Upper Saranac Lake. Two flags for the chapel, the church flag and the American flag were dedicated in General Minty's honor.

The flags were the gift of the Francis Remington Camp on Deer Island, Upper Saranac. Rev. William Clark conducted the service of dedication and the Girls Scouts from Eagle Island furnished the music.

General Minty was treasurer of the chapel for 12 years.

Following the service the annual picnic for those who attend chapel was held.

When Mr. Petty, who had been a caretaker on Upper Saranac for the last 56 years, did not return home from work at 6 o'clock last night, his sons, William and Clarence, went searching for him. His body was found in his boat on the east shore of Upper Saranac Lake. He had apparently suffered a heart attack.

Born at Crown Point on August 31, 1862 Mr. Petty came to the Adirondacks as a guide in 1895. After several years of guiding city campers on Upper Saranac Lake, he became a caretaker for the Alfred White camp on Deer Island. Mr. Petty continued in that job over the years although the camp was sold to Edmund Lyon, of Rochester, and has now passed into the hands of Mr. Lyon's grandchildren. Mr. Petty had guided for such notables as Senator Guggenheim and John D. Rockefeller.

His body is reposing at the Richer Funeral Home, Tupper Lake. Funeral services will be held there at 2:30 p.m. Saturday with Rev. Alvin B. Gurley of Saranac Lake, officiating. Burial will be in the Lake View Cemetery.

Mr. Petty is survived by his widow, Catherine W. Petty, of Corey's, and three sons, all of whom are associated with the New York State Conservation Department. William Petty of Saranac Inn, is district forester for this area; Clarence, of Parishville is district ranger for St. Lawrence County, and Archibald, of Oxford, is an aquatic biologist. There are also eight grandchildren.