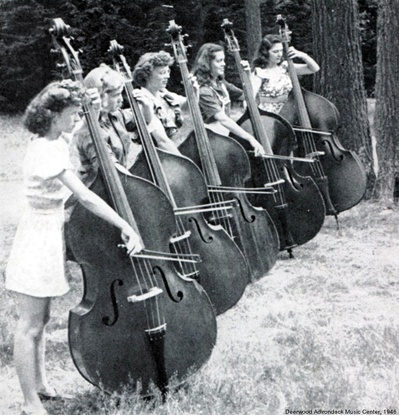 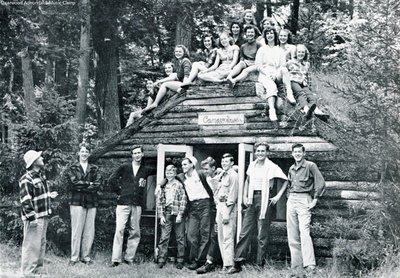 Campers ranged in age from seven to eighteen, and an adult division admitted college students, teachers and professional musicians. A Deerwood camper from 1946 to '48 has tentatively identified the figures standing at left as Kent(?) Kelsole, James Faucet, Dick Grace and David Stovall. 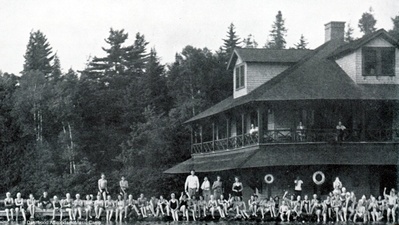 As at any summer camp, there were three daily swim periods 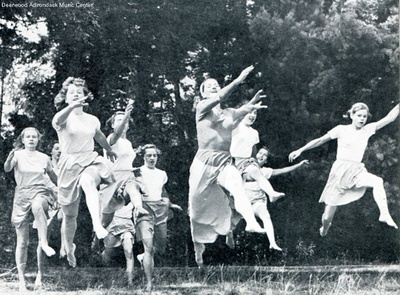 Ballet and theatre were part of the program 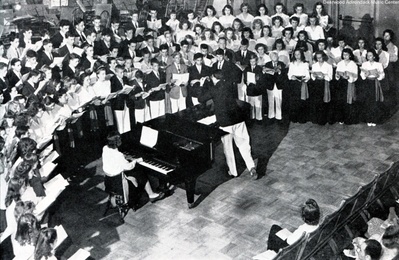 The chorus performing at the Town Hall

Woodwinds in the woods 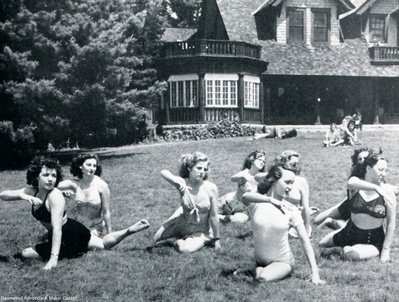 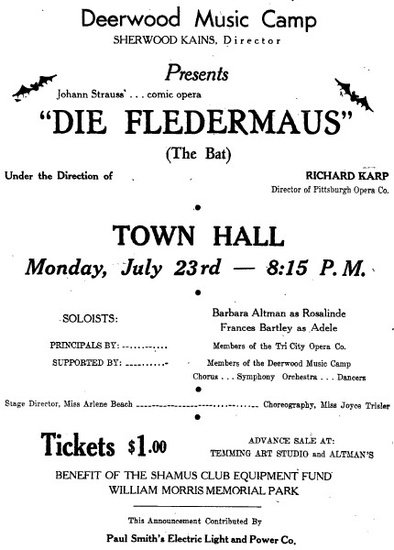 The Deerwood girls play the Camp Eagle Island Girl Scouts The Deerwood Adirondack Music Center was a large summer music camp near Saranac Inn that operated from 1943 to 1957. It was based in the great camp of philanthropist John L. Severance at the north end of Upper Saranac Lake. The camp enrollment was limited to fifty students between seven and twelve years of age, and one hundred students thirteen to eighteen.

Deerwood was a successor to the Adirondack Music Camp on Chateaugay Lake, founded in 1934, that closed during World War II due to staffing shortages. Its music director, Sherwood Kains, who had been music director at the University of Cincinnati, started Deerwood shortly after. He was able to bring in a distinguished faculty and guest artists; Bela Bartok was listed as part of the faculty at Deerwood in 1944. Bartok was staying in Saranac Lake that summer, but — due to his poor health — he was likely not actively teaching piano as described.

Every camper sang in the choir, and weekly concerts were held at the Harrietstown Town Hall in Saranac Lake and at the Sunmount Veterans Administration Hospital in Tupper Lake.

There was also a complete sports program.

Alfred Rose, the head of the opera department at Western Ontario University, wrote: "I came all the way from London, Ontario to hear your performance of the Beethoven Ninth Symphony. I thought surely you had this time bitten off more than you could chew. Of course, I know well your work with the Cincinnati May Festival, but I thought surely this would be your Waterloo. The performance I heard was astounding. It was absolutely first class. You held the orchestra and chorus together marvelously. What a wonderful bunch of kids they are. If someone had told me a group of high school and college students generously interspersed with juniors between nine and twelve years of age could sing Beethoven's Ninth like that, I would have laughed in their face. But, I heard it with my own ears. I would not have missed this experience for any in the world. It was absolutely fantastic!"

Rose had been associated with the Vienna State Opera Company; he was the son of the concert master of the Vienna Philharmonic Orchestra, and the nephew of Gustave Mahler.

Elise Chapin remembered attending one of the concerts at the Town Hall. Béla Bartók was at the concert, where a piece that he had written was performed.

Kains died in 1957, leaving the camp deeply in debt, and it was closed. The property was sold at auction, and most of the buildings were demolished in 1958.

The Adirondack-Deerwood Music Center will give their first concert of the season at Harrietstown Town Hall on Friday evening, June 29th.

As in previous years, Sherwood Kaines will be the director, and his announcement that the one hundred and sixty-five students assembled from twenty-seven states and Canada, and the thirty-five instructors are even better than previous groups brought here, is assurance that Saranac Lake is in for a musical treat. As usual there will be many state contest winners among the students, including one young lady who was "Miss Cleveland" in 1943. Many of the soloists have appeared with major orchestras, and all are accomplished musicians.

There will be eight concerts at the Town Hall on subsequent Friday nights in July and August, and later in the season there will be two dramatic presentations, including Gilbert and Sullivan's "The Pirates of Penzance," with a full dress chorus, orchestra and soloists.

Admission to all the concerts is the same, seventy-five cents (including tax), and tickets may be purchased at the Town Hall.

Sherwood Kaines, head of the Deerwood Music camp and director of the music department of the University of Cincinnati has resigned the latter post to accept a similar position at Paul Smith's college on St. Regis lake.

Kaines will arrive at Saranac Lake in June of 1948 to open his camp on the Upper Saranac lake and will remain on in the fall to assume his new duties. He plans to extend the camp facilities and to work the college music department in conjunction with the camp concerts.

Music lovers of this area are much pleased with the promised arrival of Kaines as a permanent resident of the Adirondacks and believe that the music camp will eventually become one of the largest music centers in the country.

Deerwood To Present A Concert Tomorrow

ADIRONDACK DAILY ENTERPRISE, SARANAC Deerwood Music Camp opened its doors to 145 students Sunday and has engulfed them in a program of work and play-early results of which will be seen tomorrow afternoon at 3:30 p.m. at Saranac Inn when the group entertains the publlc at its first concert of the season.

The delegation represents 26 states, in addition to 15 students from Canada.

Deerwood, a thriving community within itself, consists of some 22 buildings including a faculty building which houses the staff and serves for classrooms, a boat house with two rehearsal halls and dorm and two dining rooms, one for the faculty and one for the students.

The camp has undergone many physical changes this season with the appearance of a new three-purpose building designed for a concert hall and which can be divided for two dance groups or converted by opening the front for an outdoor theater.

Two new tennis courts have put in their appearance, together with a new sand beach and a new 250 foot dock. Four new sailboats are available and the cabins have been glassed in, heated and reroofed,

Deerwood students rise and shine early for classes commence at 9 a.m. and continue until 2:30 p.m. with an hour off for lunch.

Organized sports for off study hours offer the young people instruction in horseback riding, tennis, badminton, archery, canoeing swimming and sailing. There are inter-camp and inter-cabin competitions in basketball, softball and volleyball.

A parents' committee has raised $15,000 for necessary improvements and also acts in an advisory capacity. Parent visitation brings many people to this area during the Summer months.

There will be four special concerts in Saranac Lake this year— each being held at the Harrietstown Town Hall on Monday nights. They are scheduled for — July 11 and 25, August 8 and 15 at which time the whole camp comes to town.

The presentations will include offerings from both the orchestra and chorus.

A Sheriffs Sale of personal possessions, camp articles and furnishings at Deerwood Music Camp, near Saranac Inn, was scheduled to begin at 3 p.m. today. Furniture, canoes, dishes, kitchen utensils and other household goods were to be sold.

The camp closed about a year and a half ago after the death of its director Sherwood Kains.

The Deerwood Orchestra performing at the Harrietstown Town Hall 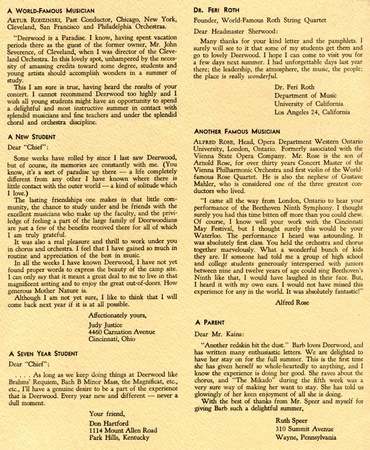 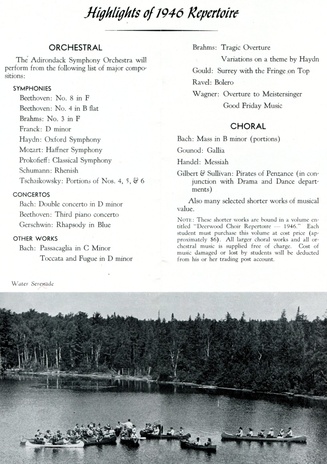 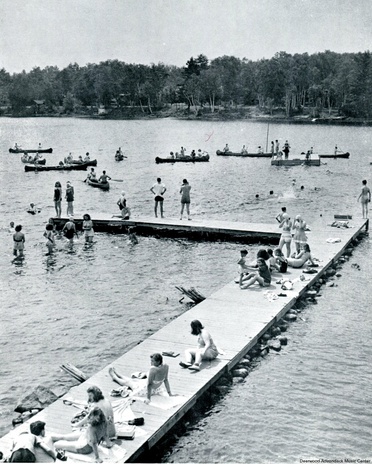 2010-12-07 16:50:46   I was there the last two years as well and then went on to Long Lake. Getting yelled at by Richard Karp (for all the right reasons - even though he was a nut)did more to encourage me to write music than any other experience in my life. I went up there about 10 years ago to see what was left... the barn and the flagpole...the rest was condos... I miss what we had.

2011-07-29 23:55:05   I attended Deerwood in the summer of 1949. As an Israeli teenager who had been less than a year in the US, it was a marvelous experience both from the musical and the social standpoints. In the 60 years since then I always remember that wonderful summer and still have in my mind some of the music we had been playing and singing. Hagit Kochba (Samuel), Tel Aviv, Israel. [email protected] —69.22.174.105

2012-05-30 13:40:40   I attended Deerwood in 1944 and 1945. Each precious experience has continued to shape my life: singing the Messiah and other master works (as a 12 & 13 year old!!); exhilarating Friday night concerts in town; sitting at lunch when the announcement was made that WWII was over (complete silence, tears - all campers were stunned and turned immediately to their music for comfort); the entire camp walking to the train station to bid good-bye to expelled campers (for smoking) -all singing "The Lord Bless You and Keep You" as the train pulled away (gorgeous!); practicing piano under the trees (music ringing all day throughout the woods); 5-day canoe trip on the finger lakes; chorus rehearsal every night in the Boat House; Sherwood Kaines and Richard Karp instilling music in us as part of our every breath. I am almost 80 now, but I wish my grandchildren could have had such an enriching summer. Molly Sykora McCrory, San Mateo, CA. —71.134.224.42

2012-06-10 15:43:24   I spent four wonderful summers at Deerwood, 1952 - 1955; my love of classical music, particularly choral music as well as modern dance, comes from those summers. Pearl Lang spent a summer there, with Donny McKayle, Bruce Marks, Eliott Feld. So many who were important in the modern dance world. I grew up in Toronto but went to Deerwood to be with my N.Y. cousin Alma Sumberg, now Richtor. Alma became a violinist then a violist, with the Jerusalem Orchestra. I think I can still sing the Brahms German Requiem from start to finish! —173.88.226.228 [email protected]