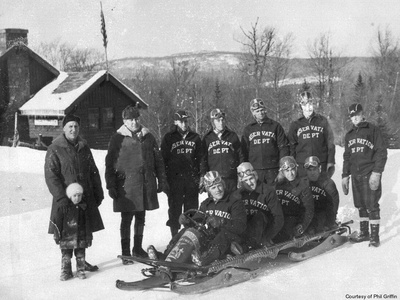 The New York State Department of Environmental Conservation (NYSDEC or DEC) is responsible for the conservation, improvement, and protection of natural resources within the state of New York. It was founded in 1970, replacing the previous Conservation Department. The Department manages the Adirondack and Catskill Forest Preserve lands, state forest lands, wildlife management areas and various other state owned public lands of New York. The Department is also responsible for regulating sport fishing, hunting and trapping within the state, and enforcing the State's environmental laws and regulations.

NYSDEC has an annual budget of approximately $1 billion and employs 3,378 people across the state. It manages over 4 million acres (16,000 km²) of protected state-owned land, including all Forest Preserve holdings in the Adirondack and Catskill parks, and another 690,000 acres (2,760 km²) of privately-owned land on which it holds conservation easements.

Under DEC, New York is divided into five regions. The headquarters of the Eastern Adirondacks region, Region 5, is in Ray Brook.

Central to the DEC are its conservation functions, which trace their origins to the Forest Preserve Advisory Board set up in 1885 when the Forest Preserve was created and the first forest rangers were hired and trained. Ten years later it became the Fisheries, Game and Forest Commission. By the early 20th century, it had been renamed the Conservation Commission. Departmental status came in 1927 and lasted till 1970.

DEC was created when then-governor Nelson Rockefeller symbolically signed the legislation creating it on the first Earth Day in 1970. The existing Conservation Department was joined by some programs then part of the New York State Department of Health, and several other commissions with environmental responsibilities to create the new department along with some new offices.

In its first decade, it took the lead in helping the state comply with newly-passed federal environmental legislation. DEC's work at Love Canal helped draw national attention to the problems posed by hazardous waste sites. It also worked to end General Electric's discharge of PCBs into the Hudson River, an issue that continues into the present day. It implemented New York's first state-level endangered species list.

In the 1980s, DEC was given regulatory authority over storage, transportation, treatment and disposal of hazardous wastes. In this capacity, it helped New York end disposal of radioactive waste at West Valley. The legislature also passed a bottle bill, to be enforced and administered by DEC. The department's facilities at Whiteface and Mt. Van Hoevenberg near Lake Placid were venues for several events at the 1980 Olympic Winter Games. The decade also saw the department complete, with considerable volunteer help, New York's Atlas of Breeding Birds, an exhaustive tome of great interest to birders and ornithologists. DEC efforts have also led to the restoration of several species in the state, including the bald eagle. 1

The New York State Conservation employes start work tomorrow in their new building in Ray Brook, just a little more than a year following the announcement of the intended removal. The offices have been on Main Street 2, in Saranac Lake, for many years.

The one-story building built of logs salvaged from the 1950 blowdown is located on what was the former Harder property, purchased by the State several years ago. 3

Erected at an approximate cost of $40,000, the building brings together all the various branches of the department. There are offices for District Forester William Petty, District Game Protector Ray Burmaster, District Game Manager Greenleaf Chase and District Fisheries Manager Robert Zilliox.

Forester Petty announced today that business will proceed as usual but the new quarters will not be ready for visitors for some time yet. There are still many chores involved in getting settled.

Fire permits, camping permits hunting and fishing licenses may be obtained as usual.

The State Department is working at present on renovating and modernizing the building it uses as a summer conservation camp for boys.

In a colum titled "Football and hunting," Howard Riley quoted an article of November 14, 1944. "Fourteen violators of the New York State Conservation laws in this Adirondack section paid fines totaling $240 during the month of October, it was reported this morning at the district [offices] of the department in Saranac Lake. [Located in what is now the Madden Transfer Storage building.] . . . [Among the Game Protectors making the apprehensions were two Saranac Lakers: Richard F. Emperor and Leonard M. Morgan, Dew Drop's brother. Those two handsome guys in uniform looked like actors playing a role in the movie, The Call of the Wild.]"

For further details, including other commissions and boards absorbed along the way, see "The New York State Archives Guide to the Organization and History of State Government," published by the State Archives and Records Administration.

1. This text was excerpted from the Wikipedia article, New York State Department of Environmental Conservation
2. Howard Riley in his column in the Adirondack Daily Enterprise, November 19, 2011, wrote that the specific location was the Madden Transfer Storage building.
3. In 1977 the log cabin on this site — in 2011, the "front yard" of Troop B of the State Police — was in use by the relatively new Adirondack Park Agency. It was later moved to the current (2010) site of the APA offices and enlarged, and later still enlarged again.