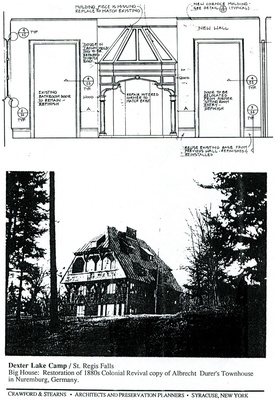 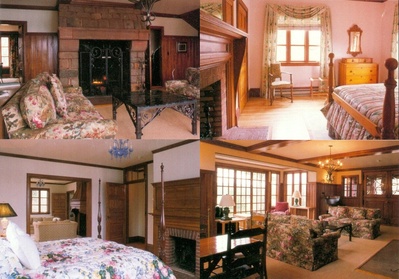 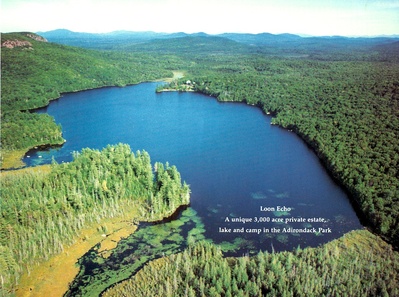 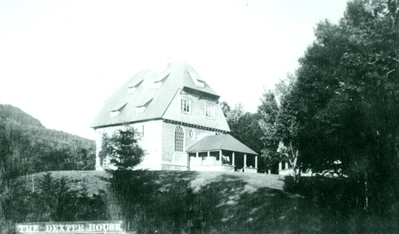 Dexter Lake Camp was a four-story mansion on a 3,000-acre forested property; the house was a faithful copy of Albrecht Durer's home in Nuremburg, Germany. The camp was built by Orrando P. Dexter, son of the millionaire founder of the American News Company. His relations with his neighbors were strained, even before he posted his property and had it patrolled by armed guards. On September 19, 1903, he was shot from ambush, while driving to Santa Clara to get his mail. His killer was never identified, although rumors suggested that the entire community knew his identity.

In 1994 the Dexter house was in pristine condition, having been recently restored by the firm of Crawford and Stearns for the previous owners, when it was purchased and demolished the 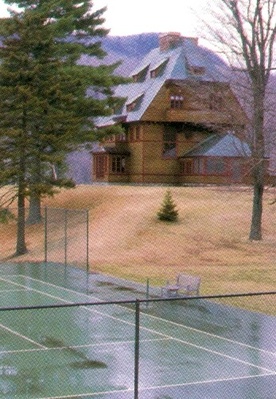 Dexter Lake Camp sales brochure, c. 1994. Courtesy of Mary Hotaling. same year by singer Shania Twain and her husband, Robert "Mutt" Lange, who built a huge, modern house and recording studio on the property. A few years after the new building was constructed, Twain put it on the market.

Sources: • Photos of the studio that replaced the historic camp • A. L. Donaldson's account of the Dexter murder

Loon Echo is a rare 3,000 acre wooded estate in the northern Adirondack Park, including the private 150 acre Dexter Lake. Dexter Lake was glacially formed, is spring fed and is abundantly stocked with brook trout. The extensive wildlife on the property includes a pair of nesting loons, in addition to blue heron, Canadian geese, grouse, fox, moose and abundant deer. The woodlands include a commercial mixture of hardwoods and softwoods, including birch, maple, ash, beech, spruce, poplar, balsam and pine. The property contains numerous springs and miles of hiking and cross country skiing trails. Cat Hill, located within the property, includes unusual granite outcroppings on the Southern face, providing a scenic overlook of Dexter Lake, the residence compound and the balance of the property.

The property includes a 100 year old main lodge, an original guest house and a large barn. The caretaker's house was built in 1984 and the tennis court was built in 1985. The lakefront includes a sandy beach, a boat house with storage room, floating docks, and a swimming dock. The lake averages approximately 20 feet in water depth and reaches a maximum of 50 feet. The property comes complete with an array of watercraft, including a 13 foot Boston Whaler.

Loon Echo is located north of Paul Smith's and Saranac Lake near Santa Clara, New York, on the western border of Franklin County. The main lodge and lake are at the end of a 1 .8 mile private road, offering total quiet and seclusion. The property is approximately 40 minutes driving distance to Saranac Lake Airport (servicing commuter flights and private jets), a 2V2 hour drive to Burlington, Vermont and a 2 hour drive to Montreal. Airports can also be conveniently accessed directly from the lake by charter seaplane. Shopping is available in St. Regis Falls and Malone locally, with more extensive shops, restaurants and seasonal activities in Saranac Lake and Lake Placid (site of the 1932 and 1980 Winter Olympics). The area includes some of the outstanding features of the Adirondack Park, including the new Adirondack Interpretive Center in Paul Smith's. Downhill ski slopes are available in Lake Placid and Tupper Lake.

The residence at Loon Echo is a three story main lodge, containing six bedrooms, four and one-half modern baths and a new kitchen. Built in 1890, the building has been completely updated over the past five years, with meticulous restoration of historic features, under the guidance of a restoration architect from Syracuse, New York. The interiors have been carefully chosen to reflect the quality of the setting and the structure. The lodge includes all new double pane windows, new insulation and new cedar siding. The building is frame and stone construction, with a massive stone foundation, an original copper roof, a storage attic and a full basement. Hardwood floors are featured throughout. The lodge is serviced by a drilled artesian well, a new oil fired furnace and supplemental electric heat to allow comfortable usage year-round.

Second Floor: The second floor includes the master bedroom suite, a guest bedroom and a panelled study. The stairway leads past a IVz story original window between the first and second floors. The master bedroom suite includes a large bedroom (13' X 17') and sitting room (14' X 18'), with views of the lake and Cat Hill, two fireplaces and a modern bathroom with double sinks and a whirlpool bath. The guest bed room (12' X 14') includes a fireplace and modern bath. The study (10' X 17') features a fireplace, three custom birch bookcases and a bay window overlooking the lake. All second floor rooms have substantial closet space.

Third Floor: The third floor accommodates numerous additional guests or family members, with four bedrooms and two modern baths. The fourth bedroom, which currently serves as a gameroom, adjoins an outside balcony overlooking the lake. A storeroom includes closet space and storage cabinets for linens. All bedrooms have substantial closet space.

Loon Echo is a unique investment property in an increasingly popular region, which will serve equally well as a family compound or as a corporate retreat.

RAY BROOK - The Adirondack Park Agency and a famous rock music producer have reached a settlement concerning the construction of a studio complex without a permit and the filling of wetlands on a 3,000-acre parcel of land just south St. Regis Falls.

Robert "Mutt" Lange and his country music star wife Shania Twain built a vast state-of-the-art 26,628-square-foot studio complex near the shores of 128-acre Dexter Lake at the heart of their property. The studio complex also includes multiple guest and residential quarters, according to an APA written statement.

Under the terms of the settlement, the couple will pay a $20,000 civil penalty and a separate $25,000 payment for an environmental benefit project intended for wetland and shoreline protection, education and mitigation. Also, Lange and Twain are required to implement a wetland restoration plan to repair and revegetate the damaged wetland, and apply for an after-the-fact agency permit.

The APA regulates land use on-private and public lands in the Adirondack Park.

The studio was constructed on lands classified as Resource Management. Under Resource Management, a building is required to have a buffer zone of roughly 43 acres from an adjacent structure. It is the strictest classification governing private lands in the Adirondacks. The violations involve the filling of wetlands and the misreplacement of the sewage septic system, according to APA officials. Additionally, as the, studio complex is more than 40 feet high, an agency permit is required prior to construction.

Upon inspection of the site, APA enforcement staff found that much of the activity involving the wetlands could not be approved for a permit, and therefore, removal of the fill was required. Lange has completed septic system relocation and removal of part of the wetland fill and will be applying for a permit for other similar activities, agency officials said. Lange is working with APA staff on the necessary permit for the studio complex.

"The park agency and Ms. Twain have come to a reasonable settlement," Sheehan said. "The fines are by no means small, but the potential damage done by their actions are by no means small. We're pleased the wetlands will be restored...we wish it could have been avoided by approaching the agency in the first place."

However, Waverly Supervisor John Fadden denounced the settlement and added the town is disappointed the couple have decided to sell their sprawling estate. Throughout their five-year stay in St. Regis Falls, Fadden said the couple have supported the community in a variety of ways, including donations to the fire department during the ice storm.

"The town doesn't feel good about it," Fadden said. "The townspeople liked her (Twain) a great deal...people here respected her property. It was kind of nice to have a celebrity in town."

Asked if he agreed with the violations, Fadden said it is hard to believe they filled the wetlands.

"These people are conservative, love animals and don't hunt," Fadden said. "In my opinion, I think they got a raw deal. I think they were taken advantage of."

The agency was initially notified of the project in 1995 after receiving an anonymous tip.

Since the violations surfaced, Lange and Twain have decided to move on. The couple's wilderness estate has been put on the market. They paid $1.25 million for the property in 1993 and it's currently listed for sale for $9 million.

Twain is more visible, appearing in country music videos and television shows. Her album "Come on Over" is currently number 14 on the Billboard Top 20 Album Chart. It has already gone platinum, having sold more than one million copies.

Tom Ulasewicz, the couple's attorney, could not be reached for comment at press time.