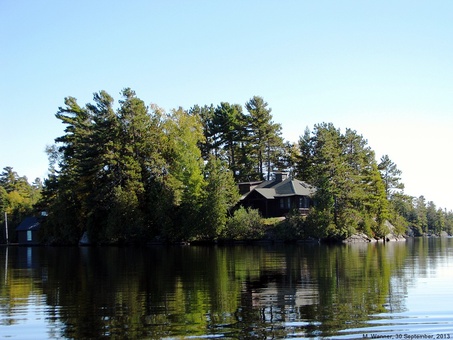 Doctor's IslandDoctor's Island is a small Island off of the east shore of Upper Saranac Lake opposite Deer Island.  The name goes back to at least 1896.

In 1904 it was may have been occupied by Stanley Mortimer, a distant relative of the Roosevelt family.

Thief Supposed to Have Secured Property Valued at $10,000--Authorities After Suspect.

Three camps on Upper Saranac Lake were entered by a robber Sunday afternoon and much valuable jewelry and other property taken. 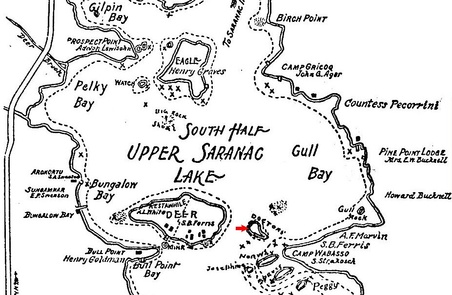 Detail of a 1912 Map of Upper Saranac LakeThe thief first visited the cottage of Dr. E. L. Holt at the southern end of the lake while Dr. Holt, his family and guests were on the water. The house was left open and the thief ransacked it thoroughly, taking jewelry and articles of clothing. Among the articles taken were a watch owned by Dr. Holt. a quantity of silverware, valuables from the dressing tables and jewelry belonging to the house party.

The thief then went to the tents and cabins of I. N. Seligman's Fish Rock Camp, the main part of which was recently destroyed by fire. A large quantity of jewelry, which had been recovered from the ruins, valued at $40,000, was in a safe in one of the buildings. The robber picked up a number of knick-nacks in the tents but failed to find the safe.

No detailed statement of the losses could be obtained from the owners of the camps robbed, but they are said to exceed $10,000. A fairly description of the man, who is supposed to have done the robbing, has been obtained, and the authorities are searching for him. He made the tour of the lakes in a boat and is supposed to have gone in the direction of Saranac Lake.

On Sunday afternoon of last week three of the Upper Saranac camps were entered by a robber and jewelry and other property worth over $10,000 are said to have been carried away. The man supposed to have done the work made a tour of the lakes in a boat and is believed to have icons [sic: gone?] toward Saranac Lake village. The thief first ransacked the cottage of Dr. Holt while the family and guests were on the water and took a watch, a quantity of silver and other valuables and jewelry belonging to the house party. Then he went to the tents and cabins of Fish Rock camp where so much jewelry was lost in the fire recently, but he secured only a few knick-nacks there, the jewelry recovered from the ruins having been locked up in a safe in one of the buildings, which was not discovered. Next the camp of Stanley Mortimer on Doctor's Island was robbed, Mr. and Mrs. Mortimer and their guests being at Lake Placid. A number of articles were taken, but the ladies of the camp had worn their jewelry when they departed. The Adirondack camps are so isolated that it seems foolish to have jewelry and valuables in them. City people might lock their valuables in safe deposit vaults during their Adirondack trips for such things are useless in the woods, where there much danger of losing them even if robbers do not appear. The Adirondacks have generally been safe against such thefts for the natives are honest people and professional thieves have no doubt taken it for granted that visitors in the woods would have little use there for costly articles of adornment while rusticating among nature's free attractions.

Fishing by electricity is the latest fad in the Adirondacks. During a local thunder storm which prevailed over the Upper Saranac Lake sector, a terrific lightning bolt struck the water near 'Grey Rocks’ camp on Doctors island.

So fierce was the impact that water spouted for many feet into the air, carrying with it a great number of fish.

A lady camper, witnessing the phenomenon, put out in a row boat and picked up 26 good sized smelt. Other nearby campers followed suit and nearly 100 fish were captured before they recovered from the stunning effects of the lightning bolt.

Old guides and fishermen stated that the lightning had the same effect as explosions of dynamite under water, which is illegal.  The fish are stunned and helpless for a time, but later regain their swimming powers.