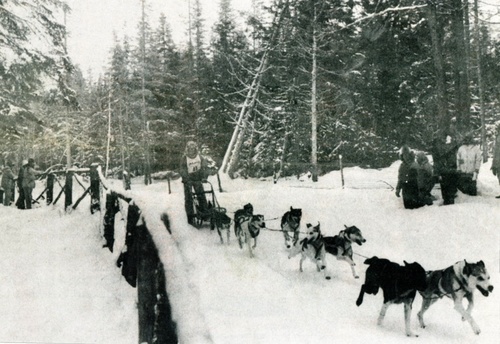 A musher heads through the gates in the 1991 races. Adirondack Daily Enterprise, January 18, 1992 Dog Sledding in Saranac Lake dates back to Alaskan dog sledder Caribou Bill's arrival in about 1910. By 1932, the popularity of the sport led to dog sled racing being included as a demonstration sport in the 1932 Winter Olympics. And in the 1980s, Alpo Dog Sled Races drew further national attention. 1

Is this call being heard here for the first time this weekend? Not at all. Back in 1926 a familiar sporting name in this village, Cantwell, to wit Francis B., organized with the aid of his loyal hardworking scout troop, a race from Lake Placid to Saranac Lake.

Jacques Suzanne, well-known sportsman of the period, and Dr. F.J. D'Avignon, local winter enthusiast, who according to clippings of the period, "maintains a large kennel of sled dogs for use in his Canadian hunting preserve," were the Lake Placid entrants.

D'Avignon's sled was driven by Charles Martin. The race was over the same course as the Baldwin Trophy Ski run which was won in this historic year by William Swift. (Twelve entries competed in the 10-mile cross-country ski run between the. villages.) Both races, sled and ski, were run on the road between the two villages.

Saranac Lake entered two sleds, one driven by Francis B. Cantwell and the other by James Tanzini. Suzanne's sled won in the fast time of one hour and nine minutes followed by Tanzini, 1:21; D'Avignon, 1:26; and Cantwell, 1:39. According to The Adirondack Enterprise, "the Saranac Lake man might have placed first had not a broken harness held him up for some time."

The race alternated for a number of years, first running to Saranac from Placid, then the next year to Placid from Saranac.

Felix Leser, who was in the area to cure, used to have a beautiful team, according to Tom Cantwell who sometimes drove them. Leser lived at Howling Dog Farms and used to send his Siberian huskies out dressed in pompons and ribbons.

Finally the sled dog races were taken over by Lake Placid and run at the Lake Placid Club, one year attracting as many as 30 entrants including the man famous for driving the serum to Nome.

Frank Hanmer, Wesley Moody, Leon LaFave of Tupper Lake, Dr. Beverley Sproul are some of the names that were associated with dog sledding.

Some of our local notables raced as children behind four-dog sled teams. Mentioned in our clippings are Charles Keough, Lawrence Murphy, Thomas Cantwell, and Henry Leis, Jr. as young drivers.

Mother Nature has given us a beautiful winter for sports, and the Chamber of Commerce has responded by scheduling a full array of events from dog sled racing through Carnival to the Winter Pentathalon. Snowshoe in to Lower Saranac Lake and watch the races.

Sled dog racing in the Adirondacks

SARANAC LAKE — North America's top mushers will be in the Adirondack Mountains again this winter as the region hosts four exciting sled dog races during January and February.

Sled dog racing has long been a tradition in the Tri-Lakes area. During the early part of the 20th century, the Village of Saranac Lake was famous for its sled dog races, with a Saranac Lake-Lake Placid run a regular winter sports activity.

Competitors in those early races often showed their dogs at the New York City Sportsman's Show, touting the sport and excellence of their teams, and many of those dogs were descendents of the "serum run" dogs of Leonard Seppala and Admiral Byrd's polar expeditions.

World War II caused a decline in the sport, but racing in the Adirondacks was revived in 1977 with the staging of the first International Sled Dog Championship.

The first three runnings of the race were held on the frozen surface of Lower Saranac Lake before a large trail was established in 1981 over private lands around the grounds of Paul Smith's College in Gabriels and Lake Clear.

The race has since emerged as one of the most prestigious sled dog events in the world. These are sprint races, as opposed to marathon events (such as the Alaskan Iditarod), and are dominated by the hybrid Alaskan Husky, bred specifically for the speed and ability to withstand cold temperatures.

Although the well-known arctic breeds — Siberian Huskies, Samoyeds and Malemutes — still race, the streamlined hybrids are the champions in today's sports.

Teams commonly consist of three, four, six, eight, 10 and up to 20 dogs. They race against the clock, with the teams achieving the lowest cumulative time for all heats determining the order of finish in each class.

The starting line is charged with excitement as the teams await their turn to take to the trail. Teams start one at a time at intervals — usually one or two minutes — and embark on a trail which winds through wild forests and open fields. Trail lengths range from four miles for the three-dog class to 17 miles for the unlimited class.

The color and excitement of the staging area contrasts sharply with the peace and tranquility along the trail, where the silence of the Adirondack wilderness is interrupted only by the sound of dog sleds whizzing through the snow and occasional yelps from the dogs.

The series of races was to have begun Jan. 4 and 5 with the Yukon Jack Adirondack Sled Dog Classic. Lack of snow forced postponement of that weekend of racing until late February.

The Classic is to offer a $3,500 purse for four-, six- and eight-dog sleds in sprint races, while a Kid & Mutt Race is also to be part of the weekend's activities. It has been rescheduled for Feb. 22-23.

The next scheduled event has suffered the same fate. The 4th annual ALPO/Paul Smith's College Sled Dog Races, scheduled for this weekend, have been rescheduled, again due to a lack of snow, according to sources at the Saranac Lake Area Chamber of Commerce. The races will be held Feb. 29 through March 1 instead, snow permitting.

Although snow had been in this week's forecast, rain early in the week, combined with a lack of heavy snowfall predicted, forced organizers to reschedule the races. The third race weekend, set for the end of January, is still on, unless weather continues to be uncooperative.

"If the snow comes through, we will race. If there is no snow, things are questionable," Lesser said.

The ALPO/Paul Smith's race has the same classes as the Yukon Jack Adirondack Classic, as well as a three-dog junior event.

In addition to the racing, spectators can watch the weight-pull contest, which is sponsored by Pepsi-Keesville.

The weight-pull competition consists of four weight classes — 60, 80 and 110 pounds, as well as unlimited weight class. Winners are determined by judging which dogs can pull the largest amount of weight in the shortest period of time.

The total purse for the weekend of competition (racing and weight-pull) is $11,000.

The "Super Bowl of Sled Dog Races" is next on the agenda for Jan. 24-26 as the 14th annual ALPO International will again be held at the Paul Smith's College Sports Annex in Gabriels.

The largest event of its kind in the continental United States, the International features sprint races in six- and eight-dog classes, as well as an unlimited class. Also, a three-dog junior class plus Kid & Mutt races, along with a weight-pull competition will be part of the weekend events.

The unlimited class is the most exciting of all the sprint races as mushers navigate their teams (of up to 20 dogs) over 17 miles of trails, at times reaching speeds of more than 20 miles per hour.

For the ALPO International, there is also a registration party on Thursday (Jan. 23) and a Musher's Ball on Saturday (Jan. 25).

The three-weekend series of races is scheduled to conclude with the ALPO/Tupper Lake Sled Dog Races Feb. 1 and 2 at the Massawepie Boy Scout Reservation.

Events in this weekend of racing are six- and eight-dog open class plus an unlimited class, along with three- and six-dog races in the pure-bred Siberian Husky division.

Races at all three events generally get under way at 10 a.m. daily. There is no admission fee, but a $1 parking fee to benefit area fire departments or charities is charged daily.

Expected back for this year's series of races is Terry Killam, a big winner in the area last year. She took the 10- and 6-dog classes in the ALPO/Paul Smith's Races, won her third straight 8-dog class at the ALPO International and then finished up with an 8-dog victory and second-place 6-dog finish at the ALPO/Tupper Lake Races.

ALPO Petfoods Inc. of Allentown, Pa. joined with the Saranac Lake Area Chamber of Commerce in 1979 to become a principal sponsor. This year, however, marks the ending of ALPO sponsorship, or at least the ending of a five-year contract for involvement in the races.

Even without ALPO sponsorship, Lesser said positively there would be an International in 1993, although the purse would likely have to be reduced.

"I know the Adirondack Sled Dog Association is very involved in a series of races for next year and Paul Smith's College had made it known they will offer their location for races to be held," Lesser said.

He added, "We are keeping our eye out for another sponsor and ALPO knows that."

Also in 1993, it is very possible Saranac Lake will receive world focus for sled dog racing. The International Federation for Sled Dog Sport (IFSS) will tentatively place the sled dog world championships in Saranac Lake. The race will be held in the United States and Saranac Lake is the top location being touted to host the event.

The language of the sport of sled dog racing has some terms unique to it. What follows is a list of the more commonly-used mushing vocabulary.

Body Language: and other non-verbal communication is significant. Watch the driver and his team.

Haw: turn left. Come Gee, Come Haw: commands to use cautiously, which mean to reverse direction on the trail, either to the left or to the right.

Easy: command to slow down.

Okay! Let's go! All right!: commands to go forward. The musher chooses one command and stays with it for consistency.

Trail!: a command shouted by a driver to another driver for right of way, if he has advanced to a position where he needs to pass. This usually occurs with a faster team overtaking a slower one, or a team overtaking one that is having problems.

Dog Box: a compartmented box divided into sections mounted on the bed of truck and used to transport the dogs. Scaled to a dog's size, the compartments afford as much room as a person has in his car.

Dog Truck: a truck with a dog box mounted on it

Drop Chain: a short chain used to tether the dogs around the truck.

Harness: strips of cotton or nylon webbing, or sometimes canvas, sewn together. When put on a dog and hooked to a tug line, the harness distributes the weight of the sled evenly over the dog's muscles.

Lead Dog, Leader: The first dog in line, generally a fairly small, intelligent and willing dog that knows all the commands and responds quickly. Two dogs may be used together as a double lead.

Pedaling: Keeping one foot on the runner of the sled while pushing with the other.

Point Dogs: the dogs that are hooked to the gangline immediately behind the leaders.

Stake Out Chain: a length of chain with shorter pieces of chain hooked to it at intervals.

Swing Dogs: all dogs hooked to the gangline between the point dogs and the wheel dogs.

Wheel Dogs: the pair directly in front of the sled which control the behavior of the sled. Wheel dogs may be somewhat larger and heavier than their teammates.