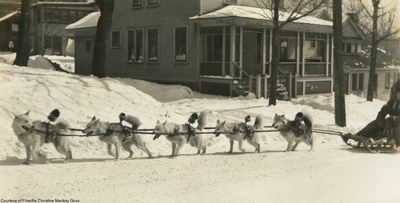 Dog Team on Margaret Street, 1930s. Using a team of dogs to pull a Dog Sled over snow and ice is a tradition in northern Canada, and with many Canadians present in the area, it is certain that Saranac Lake must have seen dog sleds early on. But the popularity of Jack London's 1903 Call of the Wild, coupled with the rise of silent films early in the twentieth century, led to Saranac Lake becoming the home of Alaskan dog musher William F. Cooper, known as Caribou Bill, in 1910. 1 By 1932, the popularity of the sport led to dog sled racing being included as a demonstration sport in the 1932 Winter Olympics. And in the 1980s, the Alpo Dog Sled Races drew further national attention. 2 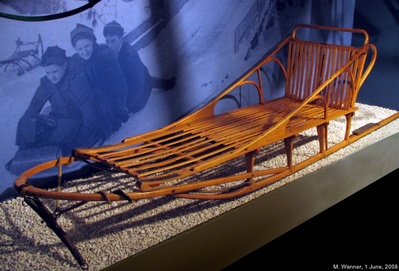 By Francis B. Cantwell

The first dog team ever to appear in Saranac Like, or for that matter in the Adirondacks as far as I know, was brought here by W.F. Cooper, otherwise known as "Caribou Bill". He came here about 1910 and located a Klondike-type camp on Edgewood Road, with dog kennels, log cabins and sheds and engaged in renting his dog team and Alaskan equipment to motion picture producers who needed winter scenery and an Arctic setting for their productions. Whole pictures were produced here and were taken at Caribou's camp, and on Lower Saranac Lake and Whiteface Mountain and also on the streets of this village. 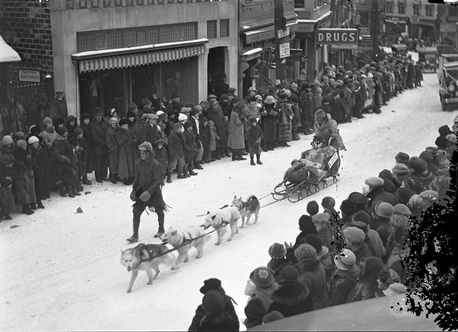 A dog sled in the 1918 Winter Carnival parade passes from Broadway to Main Street.  In the background is the Mulflur Building, the Jack Block, and Miller's Pharmacy.
Photograph courtesy of the Lake Placid-North Elba Historical SocietyEdmund Breese, a famous actor of that day, filmed the "Shooting of Dan McGrew" and other pictures at Bill's camp. It was visited by many tourists in the summer months. Doris Kenyon, a sister of Raymond Kenyon, known as Doc Kenyon of AuSable Forks, made pictures here with one Milton Sills, whom you must remember in the silent movies.

The husky dogs were one of the main attractions. They were large ugly Alaskan Malamutes, pulling a two hundred-pound sled that would carry four or five people and driven by Bill in reindeer skin parka, fur hat and red sash and a six-gun holster strapped to his waist. He was no counterfeit and came here direct from Seattle, claiming to have driven these dogs or their ancestors directly overland by Montana, Dakota, Michigan, Ohio into New York and thence to Washington, D.C., with a message to the President. He was accompanied by a dog driver named "Harry Boone," a small colored man, well known about town and who later was hired by Joe Weber of theatrical fame as a callboy in a New York theater. Harry always said that he did the "mushing" as it was called, while Bill rode the "sleepers" from town to town with advance billing for the act. which was put on with slides, as an illustrated lecture by Bill in a long-tailed Prince Albert frock coat with diamonds in his red tie.

All old timers here will remember the dog team on Broadway in Saranac Lake.

About 1915 "Caribou Bill" succumbed to the lure of a Chamber of Commerce offer from Port Henry. He moved there by baggage car with his dogs, sleds, six guns and paraphernalia. He established another motion picture camp between Port Henry and Mineville which could have been called Dead Man's Gulch. Silent movies were made there for a time. The actors put up at the famous Lee House in Port Henry. Cooper is said to have ultimately gone to Hollywood.

The log cabins and camp on Edgewood Road were later operated by Dan Buckley, well-known Saranac Lake livery owner. He bought a young, green dog team in Montreal or the wilds of Quebec, Canada, and for a couple of years tried to revive the ancient glory, glamour and atmosphere of the "Lure of the Yukon" in the Adirondacks. There was plenty of ice, icicles and snow but no one could drive the dogs. Walter Weir and myself took them out a few times for exercise on the Lower Lake, but they got fat and logy from too much meat, and were not broken welI enough to drive in the village. Mike Egan and Ed LaBounty were in their glory at this this time with spanking, fancy teams of horses, tiger and buffalo skin robes and "jingle bell" red sleighs, and dog teams had no chance.

At about this same time the famous Jacques Suzanne from Ft. Lee, N.J., arrived on the scene at Lake Placid. He had been a professional dog trainer and driver for Commodore Perry on some of his expeditions to the North Pole.

He built and established a "Sure Enuff" dog camp and mushers headquarters and artists studio at Lake Placid. Here began a real headquarters for sled dogs, wolf dogs, Siberians, Alaskans, Russian Wolfhounds, malamutes and Chihuahuas or any kind of a dog, both winter and summer. He worked out of the Lake Placid Club and his own camp. He carried passengers for hire. He kept photographers busy. Sunday supplements ran his pictures. He helped greatly to introduce dog driving here as a sport. He paraded in our Winter Carnivals with the queens. He is still going strong.

A new breed of dog appeared known as the Siberian husky. They were small, quick, intelligent and gentle dogs, used by Leonard Sepalia in his famous races in Nome Alaska. It is said that the last 60-mile lap of the "Serum to Nome" drive was made by him with a fine team of Siberians, originally bred in Siberia by aboriginals and brought over to Alaska, for the "Nome to Candle four hundred mile race."

Jack Buckley, 15, Saranac Lake, member of the high school ski team, was descending Mt. Baker trail late one afternoon recently when he fell and fractured his right leg. He was accompanied by Robert Sherman also of Saranac Lake. Sherman made a speedy descent down the trail and called Dr. Leroy Wardner and the police. Sgt. Edmund Dupree of the Saranac Lake police department secured the services of Francis B. Cantwell, a dogsled enthusiast. The dog team and Cantwell med the boy half way down the mountain.  Buckley was brought that distance on a toboggan by police, where Dr. Wardner gave him first aid.  He was taken to the General Hospital where the leg was set.

1. Cruikshank, James A., Spalding's Winter Sports, 1917, "...the world famous races of dog teams dragging great loads, which Jack London has immortalized in his dramatic stories of the far north, are recalled by every lover of winter life in the silent places."
2. Lake Placid News, January 9, 2004