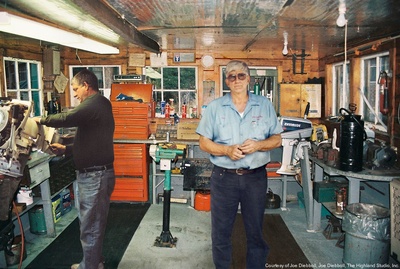 Don Duso, right; Kim Duso, left, in the boat shop (the photograph is a composite, made from three separate images) 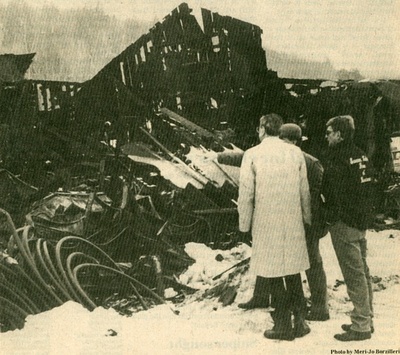 Don Duso owned and operated the Crescent Bay marina started by his father, Harry Duso, in 1924. He was Chief of the Saranac Lake Fire Department; he served as chairman of the Saranac Lake Winter Carnival Committee for 23 years, and king of the Carnival in 1988. He was involved with the carnival since 1955 when he began cutting blocks for the Ice Palace using a power saw that his father built in 1939. He was named Saranac Lake Area Chamber of Commerce's Citizen of the Year in 1984.

He is also known for having saved Albert Einstein in the summer of 1941 when the great man capsized his sailboat.

Duso became involved in the carnival in 1956, the first year he cut ice out of Lake Flower for the ice palace. When the village's saw fell into Lake Flower, Duso, using a circular saw built by his father, was called in to help with the palace and he's been involved with the construction ever since.

During construction of the palace, Duso cuts between 100 and 300 blocks of ice each morning. Each year, he cuts between 1,500 and 1,800 blocks for the annual Ice Palace.

Soon after, Duso became involved in the Winter Carnival Committee.

I'm a civic minded person," Duso, the committee's chairman, remarked. "I like volunteering. It's getting a little old hat now, but I still enjoy it."

Throughout the years, the carnival has changed little, Duso noted. Although he admitted it was harder to raise money and find volunteers to make the event a success. Fund-raising is more difficult as it has become a full-time job. Duso praised the work of Jacques DeMattos for the fund-raising effort he has led for the past few years. And he attributed the difficulty to a drop in volunteerism.

"It's longer now but we basically have the same core events," he said.

Duso, the parade marshall, indicated the parade and the ice palace are the biggest attractions at the carnival that traditionally draws 12,000 people to village on the second Saturday of the carnival.

"It's (parade) a good event and draws a lot of people in and draws a lot of money into the town," Duso said. "A lot of merchants depend on it to get through the winter. It's the boost you need half-way through winter to keep you going."

For Duso, the high point of the carnival is the parade.

"A good parade always gets me going," he said with a laugh.

Asked what has been most memorable, Duso said the high-point was when he was elected Winter Carnival King in 1986. He also pointed to the 100-member bands that used to participate in the parade.

"The kids are close to my heart as well," he said. "This is what Winter Carnival is all about. It's for the kids."

He added that the most rewarding part of carnival is a combination of the slide show Sunday night coupled with fireworks.

"It brings everything to a crescendo, you kind of crash after that," he said.

Although he wouldn't offer a specific date, Duso said he would be stepping away from the Winter Carnival Committee soon.

"It's time for a change. I still enjoy it but I don't see myself doing it for too many more years."

When he was ten, he helped rescue summer visitor Albert Einstein after Einstein's sailboat overturned in Lower Saranac Lake.

He served in the Korean War.

Don married Cherie Odone at their home in Saranac Lake on September 16, 2005.

He was born on December 26, 1931 the son of Harry E. and Sylvia (Kimball) Duso. Don was a life long resident of the area and had owned and operated Crescent Bay Inc., where he sold and repaired boats and snowmobiles, rented cabins and ran a marina and general store on Lower Saranac Lake. The business was started by Don's father in 1924.

Don was a member of the Saranac Lake Volunteer Fire Department for almost 54 years and was currently serving as the village's fire chief at the time of his death. Don joined the fire department in April 1956. He was elected by its members to serve as fire chief from 1983-86, 1988-91, 2003-2005 and 2007-present. Don held many other offices in the Department over his 54 year career there.

Don also served as chairman of the Saranac Lake Winter Carnival Committee for at least 23 years. He served as chairman of the Winter Carnival Committee from 1985 until he stepped down last year. He was elected king of the Carnival in 1988. Don had been involved in the carnival since 1955 when he began cutting blocks of ice used to construct the Ice Palace, a task he performed each year. He used a gas-powered saw his father Harry built in 1939.

Mr. Duso was chosen as the Saranac Lake Area Chamber of Commerce's Citizen of the Year in 1984. He was also a Veteran of the United States Army serving in the Korean War. After honorably serving his country, he returned to Saranac Lake to join his father in the family business.

As a 10-year-old boy in the early 1940’s, Don gained notoriety when he helped rescue Albert Einstein, a frequent summer visitor to Saranac Lake, after Einstein's sailboat overturned on Lonesome Bay.

He was a member of the Adirondack Community Church in Lake Placid where he accepted Christ as his savior and was baptized in Mirror Lake. After his baptism, Don continued to share his Christianity in his quiet and subtle way.