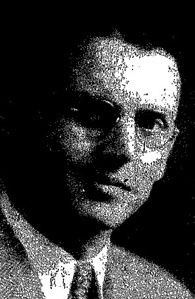 A brick at the Saranac Laboratory has been dedicated in the name of Donald Mott Chapin by the Bullock and Chapin Families. Donald Mott Chapin, known as Mott, was president of the board of trustees of the Saranac Lake Free Library, president of the Rotary Club, and chairman of the first three Craftsmen's Exhibitions from 1944 to 1946, and was deeply involved in the Saranac Lake Study and Craft Guild where he taught pottery, picture framing and silver work. He also operated the Pot Shop at 51 Main Street from 1950 to 1959.

Mott may have met his future wife when they were both patients in the Fraser Cottage.

SARANAC LAKE – D. Mott Chapin, 77, a long-time civic leader in Saranac Lake died early today at the General Hospital of Saranac Lake. He had moved to this village in 1926 and made his home at 22 Kiwassa Road.

Mr. Chapin was born March 19, 1909 in Niagara Falls, the son of Alva LeRoy and Alice (Mott) Chapin. He is survived by his wife, the former Elise Kalb whom he married June 23, 1942; a daughter, Mrs. Bruce (Gail) Bullock, and a son, David Chapin, both of Saranac Lake; and four grandchildren, Gabriel and Joshua Chapin and Sara and Morgen Bullock.

Mr. Chapin was a member of the staff of the Study and Craft Guild here from the early 1940s to the early 1950s.

From 1950 to 1959 he operated The Pot Shop, also known as "Mott's Pots" on Main Street. It was there, particularly, that he is remembered for his love of, and patience with, children who always knew they were welcome to visit.

He next taught pottery at the Philadelphia Museum College of Art for several years.

Active in the local Rotary Club, he was a past president and recipient of the group's Paul Harris Fellowship award.

Mr. Chapin had also been a member of the Saranac Lake Fish and Game Club and loved the out-of-doors, especially hunting and fishing.

His love of community was mirrored in his involvement with the Village Improvement Society, and he was instrumental in the development of the parklet behind Marine Midland Bank on Church Street Extension. He was also very involved with drawing together of planning for the Town of Harrietstown as a member of its Planning Board.

Mr. Chapin was also a member of, and had been Disaster Committee Chairman for, the local chapter pf the American Red Cross.

In Florida, he was a member of the Board of Directors of the Longbow Key Art Center in Longbow Key.

A communicant of St. Luke's Episcopal Church here, he served on its Vestry in the 1970s and was a past Sunday school superintendent.

Calling hours will be held at the Fortune Funeral Home from 2 to 4 and 7 to 9. p.m. Wednesday.

The funeral service will be held Thursday at noon at St. Luke's Church with the Rev. Rick Dennis, pastor, officiating. Cremation will follow.

Memorial donations may be made to the Saranac Lake Free Library or St. Luke's Church.

Editor's Note: Mott Chapin was one of many people who came to Saranac Lake to seek a cure for tuberculosis, and ended up staying and "adopting" the village as a second hometown. In the following article from the Nov. 26, 1962, edition of the Daily Enterprise, local Columnist Arthur Slattery re-counts an interview with Mr. Chapin on the occasion of a Rotary Luncheon.

It was an impressive thing to see in what respect and affection he was held. Colleagues, friends and fellow Rotarians came by the table. Each had a joking remark or a pleasantry to make, or a bit of news to convey. It is pleasant to sit with a man obviously well liked. It gives one an insight into a man.

For one thing, there is no "side" about D. Mott Chapin. He is as direct as a child's question; there is no guile in him. And there is a love of his adopted village that shines in his warm, blue eyes when he talks of Saranac Lake.

"I was born in Niagara Falls, New York, in 1909," he says, in a likeable speaking voice. "Father was a doctor who came there from Oneida with Mother to take up practice. That was in 1900. My older brother and I had only one ambition in life: to be a doctor like Dad. It's ironic that neither of us made it. I got TB in junior high school and was sent here to Saranac Lake and put in bed and kept there. That was in 1926, and long before the new drugs, of course. I never really finally got out of bed 'til 10 years later.

"Of course, this meant that I missed, college and the chance to study medicine But I had the next best thing to a college education. I had solitude. I had time to think, time to read and to absorb some of the great thinking that's in books. Instead of spending my time in the ordinary activities of the average healthy kid, I was sort of forced to improve my mind, if you see what I mean. So, I think I matured earlier because of all this bed-rest, and now, even though it cost me the chance to become a doctor, it paid off this other way. My brother never made it either, by the way. He died in 1932, but that's another story.

"Anyway, in 1935, I started working for the newly-formed Saranac Lake Study and Craft Guild. Dr. Sid Blanchett and Bill Stearns were operating it under a Guggenheim grant. I learned various handicrafts there and then went out to bedsides in small sans and cure-cottages and taught leather-work, wood-carving and modelling in clay.

"After 10 years of wheel-throwing, I realized that I love these mountains and this area and that I would never be happy anywhere else. Another lucky thing happened at the Guild. I met a brown-eyed brunette, five foot five of everything a man wants in life. She was Elise Kalb, of Catonsville, Maryland, who was also here for her health. We both were interested in pottery, besides all the rest. After we were married in 1942, we went to Alfred University in Alfred, N.Y. to the N.Y. State School of Ceramics, and took a summer course in pottery, set up the Pot Shop here on Main Street and made all the pottery by hand on a potter's wheel — none of this pouring stuff into a mold. The result was that all the pieces were unique and individual - and, that's what gives pottery its value. I continued to work and teach at the Guild right up until 1958, I think it was. I also managed the Santa Claus Shop (pottery) for 5 years. There's a revival of interest and a new feeling for the hand arts now, and it's being taught in high schools and colleges.

"We left here in '59 to go to Philadelphia, where I taught pottery, earthenware, part porcelain, and porcelain. But we weren't happy away from here, and missed the out-of-doors, and the fishing and boating and hunting. So, back we came, and I'm looking around for a shop again."

D. Mott Chapin has always been interested in the activities of this community. He gives generously of his time. He's been 7 years on the Board of Directors of General Hospital; a Chamber of Commerce treasurer for 3 years, and 8 years a Boy Scouts' Mountain District Chairman. And, of course, an active Rotarian. The Chapins have two robust, healthy children — a lovely girl, Gail 12, in Junior High, and a fine boy, David, now 9, in the River Street school.

"People should not merely be willing — they should be anxious to do at least one thing for their community," Mr. Chapin says, "It's the only way to grow yourself, and the most satisfying way to see your community grow. All this talk about Saranac Lake going down the drain is for the birds. With some people, it seems like it's a 'civic duty' to complain about the village going to hell. Why, the banks are full of money, there are new cars on the roads, and the shops are all busy. Anyone who sells Saranac Lake short is a sap. After 3 years away, I'm back to stay. I know now that I never could be happy living anywhere else. And that goes for the family as well. Although I wasn't born here, I feel I have come home again."

You have, Mott Chapin. You have.