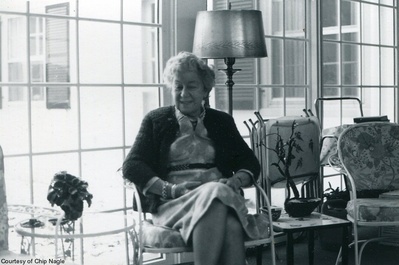 Dorethea Simmons Harris on her 100th birthday(!) photographed in Malvern Pennsylvania  at the home of her niece, Emily Seaman Nagle.
Photograph by Victoria Nagle, wife of Charles Nagle. 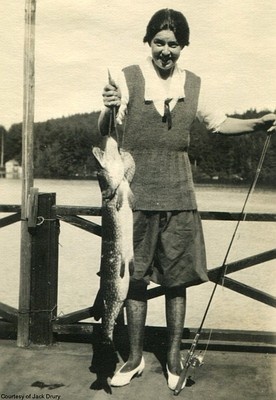 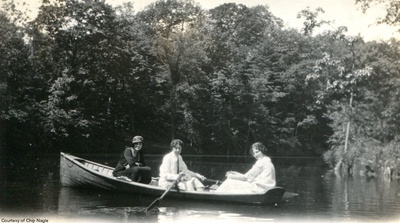 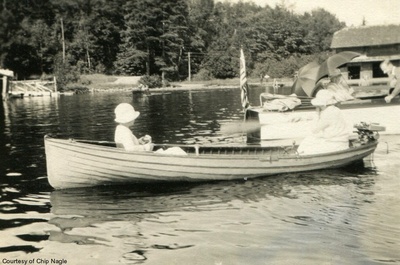 Dorethea Simmons Harris was a long time summer resident of camp Point O'View on Lower Saranac Lake, and a generous benefactors to many local charities, including the Village Improvement Society.

She was the youngest of three sisters who grew up in their mother’s camp on lower Saranac Lake (Mark Twain Camp) . The older two sisters were Marjorie (Marney) Kane and Edith Seaman.

Mrs. Charles C. Harris started the building fund, with a gift of $21,000. She also gave $500 extra to hire a library consultant. The Enterprise regrets that no mention was made in the article printed Friday of Mrs. Harris' initial gift.

Dorethea E. Harris, 105, widow of the late Charles C. Harris and longtime summer resident of Lower Saranac Lake, died April 22 at Kendal at Longwood, Kennett Square, PA, where she had made her home since 1973.

Born May 16, 1892 in Wilmington, Del., the daughter of Jesse Gregg and Emily Elliott Simmons, Mrs. Harris was educated at Wilmington Friends School, the Mary Burnham School, Northampton, MA, and graduated in 1914 from Smith College.

Mrs. Harris met her husband, Charles, when she was summering at her mother's Mark Twain Camp on Lower Saranac Lake. The couple were married in 1927 at Wilmington, Del.

They owned the adjacent camp Point O'View, where Mrs. Harris spent summers until her 99th year. Mr. Harris died in 1959, at their home in New York City. She was also predeceased by two sisters Mrs. Howard L. Seaman of Wilmington, Del. and Mrs. John I. Kane of Saranac Lake N.Y.

Mr. and Mrs. Harris were both generous benefactors to many local charities, Mrs. Harris gave the laboratory for the new Saranac Lake General Hospital (Adirondack Medical Center), in memory of her late husband and supported the building programs at the Saranac Lake Free Library.

She also knitted hats for newborn babies to wear home from the General Hospital. She was a member of the Lake Placid Club, as a young woman sang in St. Luke's summer choir and, in later years, [illegible] was a communicant of St. John's in the Wilderness, Paul Smith's.

Services will be held next summer at grave side.

Burial will take place in the family plot at St. John's in the Wilderness.

Memorial donations may be made to St. John's in the Wilderness, Paul Smith's, NY 12970 or the Dorothea Simmons Harris Scholarship Fund, Smith College.