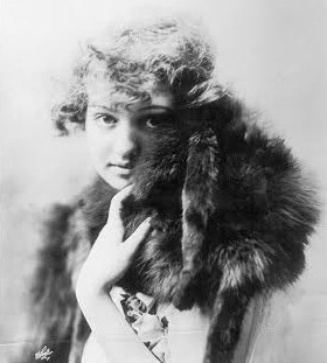 Doris Kenyon, the film beauty who spent eight weeks amid the snows of Saranac Lake making the big eight-reel production, "The Great White
Trail" being produced by the Whartons. Photograph courtesy of  Ithaca Made MoviesBorn: September 5, 1897

Doris Kenyon was an American film and television actress from Syracuse, New York.  One of her early films, The Great White Trail, was shot in Saranac Lake in 1917.  She was the sister of Raymond Kenyon, an Assemblyman of Ausable Forks, New York. Saranac Lake has been frequently visited by movie picture companies this winter. They use that section to put Alaskan and Alpine scenes on the screen. The other day a company of 40 movie stars camped down at the St. Regis Hotel to make pictures. In a "gold seekers" hunt in a scenario entitled "The Great White Trail" developed at Saranac Lake the past week, over 100 Saranac Lake woodsmen took part and two Saranac Lake men were impressed into service as leading characters, D. T. Buckley taking the part of a general bully and rowdy of the North Country, and Henry Duffin playing the part of a U. S. Marshal. Buckley tries to shoot up a mining saloon and the marshal tries to arrest him, but he escapes. Doris Kenyon, the charming sister of Assemblyman Kenyon, of Essex county, is the heroine of the play and was in Saranac Lake when the film of another scenario shown in Malone a couple of weeks ago, in which she was the heroine, was shown in Saranac Lake. As a special favor she appeared on the stage there In the Pontiac Theatre at the close of the picture play. She was formerly on the legitimate stage, but has since become one of the leading favorites of the screen. For the staging of Arctic scenes Saranac Lake is unsurpassed.