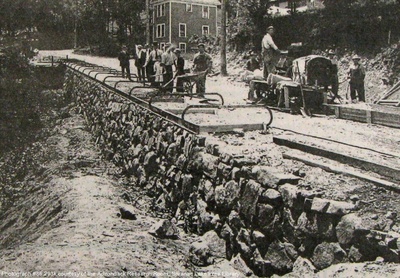 Dorsey Street, early 1900s, sidewalk construction, in the section that was cut off by the LaPan Highway and is now called Pelkey Lane. Adirondack Daily Enterprise, November 23, 2002 Dorsey Street runs from Broadway south to the George LaPan Highway. Dorsey Street is labeled Spring Street on the 1895 Sanborn map.

Before the highway was built, it ran through to Lake Street, past the ball field that would become Petrova School. The portion that runs from Lake Street north to the LaPan Highway is now named Pelkey Lane.

Dorsey Terrace branched off of Dorsey Street, running parallel to it for a short block before rejoining it. Addresses of the few houses remaining on it now bear Leona Street addresses.

The area between the Saranac River and Main Street is now known as the Dorsey Street Parking Lot.  Before the bridge was built in the 1950s, the area served as the site of several liveries and of the summer Tent Theater.