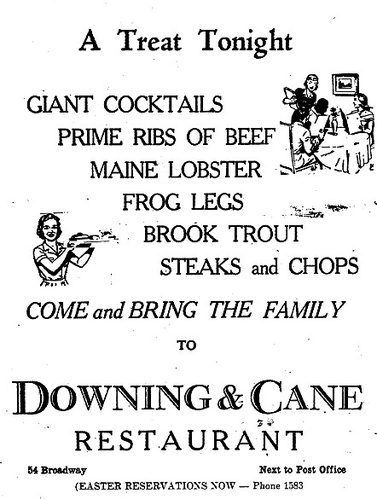 Adirondack Daily Enterprise, May 21, 1953. Downing and Cane's was a very popular restaurant and bar located in the Loomis Block that opened at the Downing Block at 15 Broadway in 1937. In 1953 it moved to a considerably larger space, the former site of Tuffy's Tavern in Thompson Building at 54 Broadway.

Mickey Cimbrec and Harry Owens were long time bartenders, and Elizabeth C. Fletcher was a cook for 24 years.

The restaurant closed in 1963.

Now it's official, as the advertisement says—Downing and Cane are moving to what was the old Town Tavern.

And it's also official today that Mrs. Louise Curley will move her shoe store from 6 Broadway to the present location of Downing and Cane.

Downing and Cane will close tomorrow night after the regular hours. Monday and Tuesday they will move into 54 Broadway. Wednesday they will be open for business in the new location.

Mickey Cimbrec and Harry Owens will be behind the bar as they were in the old place that Downing and Cane operated for the last 17 years. And the present staff of waitresses will be there. The new location for Downing and Cane has been renovated and painted and the furnishings refinished during the last six weeks. The wall decorations have been removed and will be replaced—as soon as possible—with photo scenes of horse racing, including a photo of the finish of this year's Kentucky Derby. The new dining room has 60 more seats.

Mrs. Curley will move into 15 Broadway as soon as renovations are completed. She hopes it will be the first week in June.

The following has been excerpted from a piece on the Loomis Block by by Philip L. Gallos:

The clientele at Downing and Cane's, with Micky Cimbric behind the bar [...], was primarily young, extroverted, gregarious. Many of these people were in the process of curing. Tuberculosis was a young person's disease, and the village was full of men and women in their 20s who were lusty and bright and vitally alive regardless of the fact that their lungs harbored a deadly bacteria. The truth of the matter was that many who came to Saranac Lake were only marginally afflicted and were receiving the best of care. Furthermore, if correct hygiene were practiced, tuberculosis was not the galloping contagion that people not familiar with it feared.

So, the young patients came to Downing and Cane's (sometimes looking a good deal more healthy than the non-patients).

After George Downing's death in 1954, Grant Cane moved the restaurant to the Thompson Building, though Belle Downing retained ownership of 19 Broadway.

Downing and Cane went out of business in the mid-1960s.